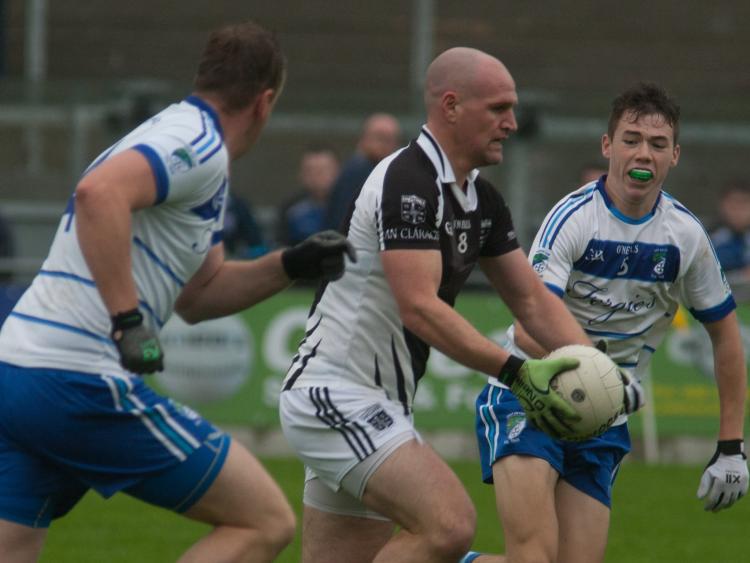 A fascinating and exciting game took place in Daingean pitch this evening, full of great entertainment, Clara might have been favourites coming into this with their vast experience but Bracknagh showed right from the off that they deserved to remain senior.

Bracknagh’s fast start was highlighted by quick fire scores from Robin Galbrith and Anthony Cunningham, Peter Cunningham dominated the opening five minutes and was denied a goal by a brilliant Kevin Meehan save. The resulting 45 lead to a Peter Cunningham point after a nice one, two with his younger brother Mikey.

After a slow start Clara finally got going and registered their first score from a Cormac Delaney free: as always Carl Stewart was a driving force at centre back for Clara, he made a typical driving run through the middle which wasn’t tracked and the ball was brilliantly slipped to him by Thomas Deehan and he made no mistake with his finish, placing the ball expertly in the top of the net and Bracknagh knew they had a game on their hands.

Stewart and youngster Ed Cullen started to take over around the middle third, Stewart delivered a brilliant ball to Graham Guilfoyle who showed class kicking a great score, and Cullen delivered a similar ball in the next phase of play and Pa Smith delivered the finish.

Bracknagh began to take over again with the help of inspirational scores from Ciaran Donnelly and D Kelly, Bracknagh got a big slice of luck when an ambitious shot from Robin Galbrith fumbled into the back of the net.

The exciting Josh Fleming did his best to keep Clara in the game, but Bracknagh’s direct running and pace was sensational at times and Ciaran Donnelly epitomised this with a wonderful run and score just before the water break to leave the score at 1-6 to 1-4 in Bracknagh’s favour.

After the water break quick fire scores from Mikey and Peter Cuningham pushed Bracknagh further ahead, one of these scores was a 45 by Peter Cunningham off his weaker left boot.

Just as it looked like Bracknagh were about to run away with the game, Josh Fleming delivered a sensational ball to Thomas Deehan who found the back of the net to bring Clara back into the game.

Bracknagh finished the half the strongest and went in with a one point lead, thanks to Mikey Cunningham keeping the scoreboard ticking over.

Similar to the first half Bracknagh started the faster of the two when Fionn Dempsey turned over Graham Guilfoyle and the brilliant Ciaran Donnelly broke and scored to set the tone for the second half. Clara changed their goal keeper at half time and this decision backfired as a poor short kickout was intercepted by Robin Gallbrith who buried it to the back of the net for his second goal.

In all truth Clara never gave up but they could not deal with Bracknagh’s direct running and Peter Cunningham’s long range shooting was worth the entry fee alone as he kicked some wonderful scores. in the second half. Clara seemed down and out but the ever reliable Carl Stewart brought the fight to Bracknagh and drove his team on. Tthe ever present Thomas Deehan scored another traditional Deehan goal to give Clara a glimmer of hope, but Bracknagh remained strong and in particular Fionn Dempsey and Jim Hendy who were very solid at the back, they held on to retain their senior status

It was not for the want of trying that Clara lost this game, they gave it everything and had some brilliant performances from in particular Thomas Deehan, Ed Cullen, Colm Doyle and none more so that Carl Stewart who will be key for Clara in their endeavours to return to senior. Bracknagh on the other hand showed why they deserved to be a senior team but also why they ended up in a relegation play off.

They play an open expansive game which they probably need to tighten up if they do not want to be in this position next year, but that said their attacking football was sublime in particular C Donnelly and D Kelly were outstanding going forward and M Cunningham, Costello and Galbrith were a constant threat for the Clara defence, and the real difference maker was Peter Cunningham who showed more than any player on the field that he deserved to be playing in the top tear of Offaly football.