No surprises as Tullamore and Daingean reach JFC final

Quick steps back for Shannonbridge, Doon and Kinnitty 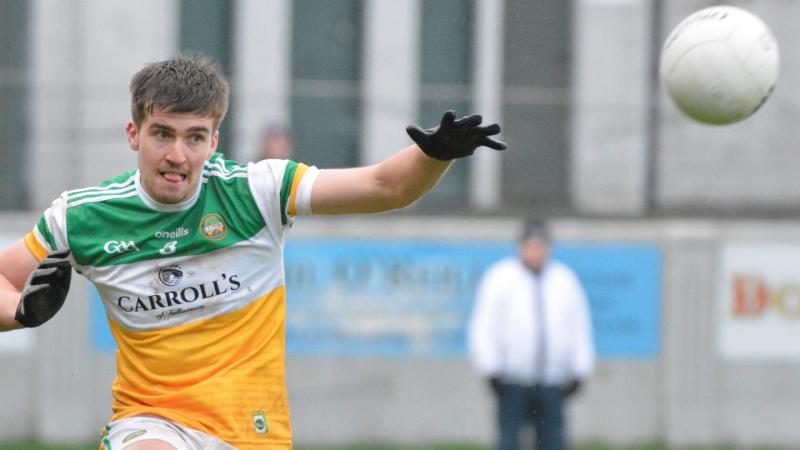 THE Junior Football Championship has emerged as the most predictable of all the football ones and there werre no surprises when the semi-finals took place this evening. As expected championship favourites Tullamore and Daingean qualified to compete in the final, though Tullamore didn't have things all their own way against a brave Kilclonfert outfit.

Favourites from the start of the year, Tullamore were given plenty of bother by a very hard working Kilclonfert side before winning by 1-8 to 0-6 while Daingean showed very encouraging form as they destroyed Clara by 2-18 to 1-8 in the other semi-final.

In a low scoring affair, Tullamore took control to lead at half time by 1-6 to 0-3. That proved to be a sufficient cushion but they only managed two points in the second half as Kilclonfert fought with everything they had. Kilclonfert could only score three points themselves and didn't manafacture the goal that would have made it truly interesting but once again the Daingean parish side performed close to their potential.

They were playing against Tullamore's second team and did well to compete so well – the capital town have a vast pick compared to Kilclonfert who once again struggled for numbers this year and, understandably, they are not one bit happy to be back in Offaly football's fourth tier. Tullamore have made winning this title a big priority this year and they are exactly where they want to be but this wasn't their most convincing display of the season,

It is also clear that Daingean will provide very serious opposition in the final and they will fancy their chances of winning. One of Offaly's proudest football clubs, the winners of a few senior football titles and supplier of All-Ireland medal winners, Daingean have slipped back a long way in recent years but are working hard at getting back up a rung on the ladder.

They have been in excellent form this year and this was another fine performance by them. They were pushed hard by Clara in the first half and a 1-8 to 1-5 half time lead left them with plenty to do. However, Daingean played really well in the second half to pull away for an impressively facile win – Clara's campaign had started brightly but after losing a couple of players to their senior side, the wheels came off their bid and their demise was not a surprise here.

Meanwhile Kilcormac/Killoughey and St Rynagh's qualified to clash in a very “hurling” orientated intermediate football last night, beating Ballycommon and Clonbullogue in fiercely contested semi-finaks – K/K required extra time to beat Ballycommon as they recovered well from a very poor start while a golden start was pivotal to St Rynagh's win as they withstood a second half rally from Clonbullogue.

Walsh Island had a fine 1-16 to 1-13 win over Shannonbridge in the Senior “B” Football Championship relegation play off tonight, ensuring an instant return to intermediate ranks for last year's champions.

Last year's junior champions Doon also made a straight return to the lower grade, losing by 2-12 to 1-10 to Clodiagh Gaels in the intermediate football relegation play off. Doon went well for a long time here, leading by 1-6 to 0-6 at half time. They were four points up at the three quarter way stage and in the 50th minute but were overhauled in the closing ten minutes as the Killeigh-Killurin outfit mounted a decisive late victory charge.

In the junior football relegation play-off, Kinnitty conceded a walkover to Rhode, going straight back to junior “B”. It was disappointing to see Kinnitty concede in this manner but with a big senior “B” hurling semi-final next weekend and football very much of secondary importance to them, it was not a surprise that they took this option.