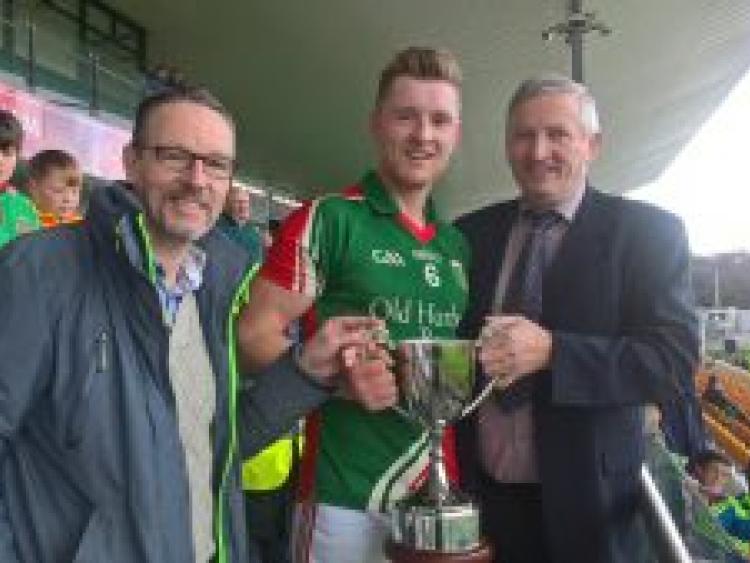 Gerry Spollen and Durrow are within sight of more silverware.

ON a day when almost everything that could go wrong seemed to be going wrong for them, Durrow pulled it out of the fire at the death to record a memorable win over a gutted Tubber in a compelling Senior “B” Football Championship semi-final this afternoon.

They lived on their wits at times and it took a dramatic point from Kevin McDermott four minutes into injury time to get them across the line and save them from extra time but over the balance of the sixty minutes plus, the result was a fair one and the right team won.

An awful lot of things went against Durrow here. Firstly they went into the game without key performers, the injured Michael Mooney and Jack Fogarty – Mooney only came on late in injury time after a sub, Ciaran Burke picked up a heavy knock. They then produced an excellent first half when playing against the wind, playing a fine controlled brand of football and were full value for their 2-4 to 0-6 lead at half time.

However, a lot of their good work had been spoilt when midfielder Bobby O'Dea got a straight red card three minutes into injury time – O'Dea was sent walking by referee Chris Dwyer after an off the ball clash that saw Eddie Kavanagh spreadeagled on the ground. There was a lot of debate about the merit of it afterwards, however, O'Dea appeared to know what was coming once Dwyer consulted with his linesman but whether it was justified or not (and that will be determined later as Durrow have the right of appeal if it was wrong), it entirely changed the goalposts here.

With a full quota of fifteen and the wind to come, Durrow would have been in a very strong position but instead they were forced onto the back foot in the second half and they just barely hung on and were mildly fortunate to have won.

They were 2-6 to 0-7 ahead early in the second half and still motoring along very nicely when they conceded a needless penalty after Oisin Cusack hauled down Ian Daly, who looked to be well bottled up in the 38th minute. Lee Colgan stroked home the penalty and now Tubber had a lifeline.

Finally beginning to play some of the football they are capable at, Tubber exerted quite ferocious pressure and Durrow nearly buckled. Points from Bernard Allen and the superb Lee Daly levelled it up with 18 minutes left and the smart money was now on Tubber. Durrow were crying out for something to happen and they owed a debt of gratitude to their defence in this period as the excellent Jack O'Brien lifted the siege with some fantastic forays up the field and Kevin McDermott came back deep, winning crucial ball in his half back line.

A well struck free from goalkeeper Stephen Fitzgerald and a good point from O'Brien gave Durrow a two point lead, 2-8 to 1-9 as it drifted into the closing ten minutes. They should have sealed it in the 54th minute when Gerry Spollen got through on goals but his piledriver was brilliantly saved by Jamie Colgan – it was perhaps the wrong man in the right place as Spollen, who had a very good second half at the heart of the Durrow defence, would not be a natural finisher in that position.

With Fitzgerald wide from the “45”, it kept the door open for Tubber and once again, they piled forward in numbers. With Joe Higgins now stamping his authority on the game, Tubber got back on terms with a minute left thanks to points from Ronan Farrell and a Bernard Allen free. They exerted fierce pressure but were trying to manufacture a safe shot before Bernard Allen eventually had a pop but it went wide – Allen had a good game for Tubber but his radar was not as tuned in as normal as he had a few wides that could have made the difference.

It looked like Durrow had spurned their chance at the other end when Darragh Wyer had an easy tap over point from 20 metres but inexplicably went for goal. However, Tubber couldn't clear after Jamie Colgan comfortably saved it and the ball fell to McDermott who stroked over a most dramatic winner.

Ultimately Durrow won because of their first half excellence when playing against the wind. Their work rate was terrific and this coupled with a very subdued, quite poor display by Tubber allowed them to take control.

Tubber had been rocked when Billy Fogarty got in for a second minute goal, winning a mark from a long ball but playing on and booting it to the net as the Tubber defence seemed to freeze. Fogarty, who started very brightly but was replaced at half time, got another point as they led by 1-1 to 0-2 after five minutes.

Tubber never really got going in the first half. They tried hard without motoring well or generating true momentum and they had reason to be grateful to Ian Daly, who kicked three super points from the half forward line. Ultimately, Durrow won this game in the first half – their tackling and support play was great as they unsettled Tubber and they retained the ball very well while moving it quickly.

Tubber had the gap back to a point when Durrow's crucial second goal arrived in the 25th minute. It was a great individual goal by John Murphy, who twisted and turned as he moved into danger territory and then slotted the ball home, though questions have to be asked of the Tubber defence - who stood off him, didn't get in close to tackle and didn't seem to realise the danger until it was too late.

Ian Daly and Kevin McDermott exchanged lovely points as Durrow led by 2-4 to 0-6 at the break, and the impression remains that they would have won with a degree of comfort but for O'Dea's dismissal.

It was a great win for Durrow and with Ballinamere senior hurlers gone, they will now have an opportunity to prepare with all eyes on the big ball. They had heroes who stood up all over the field with Stephen Fitzgerald very good in goals while Jack O'Brien, Mark Hughes and Gerry Spollen really impressed in a very honest defence that survived under severe second half pressure.

Bobby O'Dea ended up as a central figure in this game but he made a powerful contribution to Durrow's win in the first half. He was the most influential player on the field before his dismissal while Ross Ravenhill also did well beside him. The attack have some room for improvement. Kevin McDermott worked with typical determination, using the ball well while John Murphy had very good moments, and the Wyer's Dan and Darragh sent in some good ball but it was a somewhat mixed bag by their front six – though Michael Mooney should be back for the final and the Durrow attack were relying on occasional breaks rather than any sustained supply of ball in the second half.

Tubber will be very disappointed but they have no complaints. They didn't perform in the first half and while they had huge possession in the second half and almost got there, they over played the ball a bit and had to work very hard for everything. Eddie Kavanagh, Joe Higgins, Lee Colgan, Eoin Dunne, Bernard Allen and Ian Daly were among their better players as they toiled very honestly but didn't play to full potential.