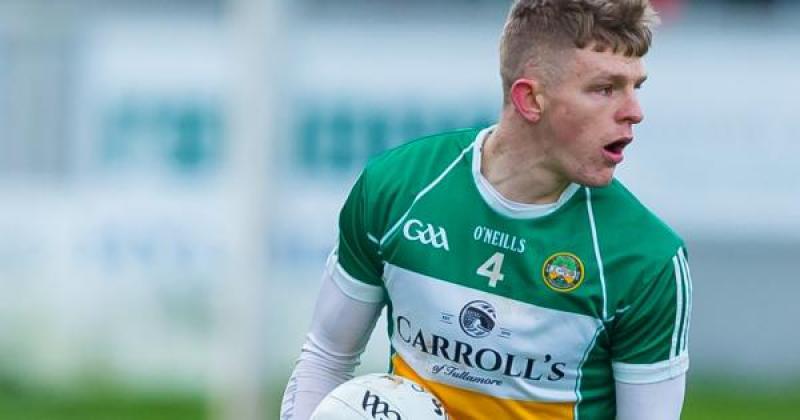 AN Intermediate Football Championship semi-final of heart warming intensity and excitement ended with Kilcormac/Killoughey getting the crucial scores in the second period of extra time to advance to a final meeting with St Rynagh's.

In a terrifically entertaining game of football, hard hitting and no holds barred but fair with a lot of good football thrown into a compelling mix, K/K had the legs in extra time to get the better of a Ballycommon side who contributed superbly to the proceedings.

In some ways, it was an extraordinary win for K/K. They were very poor for twenty minutes or so at the start when they were roasted alive by a flying Ballycommon side. K/K made a surfeit of errors all over the field and it looked like their chickens were going to come home to roost as Ballycommon carried the game to them from 1 to 15.

Ballycommon were superb in the early exchanges. They took on their men at pace at every opportunity and forced K/K onto the back foot as Conor Dunne (free), Stephen Conneely and Karl Dunne got great points. K/K's opening goal in the sixth minute, booted home by Conor Mahon after Stephen Leonard's cente was very much against the run of play and only a brief blip for Ballycommon.

They continued to drive at their opponents and they were relentless in their play. The losers were on top all over the field as Conor Dunne and Stephen Conneely got fine points before Conneely punched a goal after a great Gareth Mann break forward in the 12th minute. K/K barely had time to breath when Ballycommon got theitr second goal, Barry Bracken applying the finish after Steven Rosney did well to save from Gareth Mann.

2-5 to 1-0 ahead, Ballycommon were in a great position. They were playing all the football and K/K were making a huge volume of errors. As usual, football is very much of secondary importance to hurling in K/K and their lack of work on the football field showed up like a sore thumb – they just couldn't get to grips with Ballycommon's intent and pace while a lot of their mistakes were in the unforced category, with poor handling and kicking.

However, by half time, the game had an entirely different complexion and lady luck did smile kindly on K/K. After Stephen Leonard brought them back into it with a brilliantly punched goal in the 16th minute when James Gorman did well to break the ball and Dylan Murray added a point, Ballycommon were very unlucky to see Gareth Mann's shot at goal rebound off the post after a great Conor Dunne charge forward.

A goal at that stage may well have ended the game as a contest and the impression remains that K/K could have given up a bit after it. However, it didn't go in and Ballycommon were even unluckier four minutes from the break when Stephen Conneely's rocket rebounded off the crossbar. It was 2-6 to 2-3 at half time and a three point interval lead was a poor reward for Ballycommon considering their excellence for twenty minutes.

An incredibly intense second half emerged with K/K getting a goal straight from the throw in – Stephen Leonard finished off a James Gorman ball and it was a real dogfight from here on. Despite a black card for wing back, Colm Leonard, K/K drove at a now struggling Ballycommon and they led by 3-6 to 2-7 at the three quarter stage.

Serious questions were being asked of Ballycommon and they showed great character as they got back into it. Gareth Mann got a very good score as Tom Mealiffe made his presence felt when moved out to midfield, winning a couple of pivotal marks. Stephen Conneely levelled it up after one of those, 2-9 to 3-6 with ten minutes left and when he floated over a beauty to put them ahead two minutes later, it looked like it was Ballycommon's evening.

Just as Ballycommon's character has been questioned on occasions, so has K/K's football desire but they also conjured up the right answers. Just when it seemed Ballycommon could push for home, K/K lifted the siege brilliantly and Stephen Leonard and Dylan Murray – an outrageous shot with the outside of his right foot from 40 metres – got exccellent points to put them back in front.

Conor Dunne got the equaliser from a free with a minute left and despite having an extra man for a few minutes of injury time (plus two and a half minutes in extra time) after Dylan Murray got a black card, they couldn't manufacture a winner.

It was 2-11 to 3-8 at full time and it continued to be incredibly tight in extra time. There were just three points in the first period as K/K led by 3-10 to 2-12 at the break, but crucially Ballycommon looked to be out on their legs as the winners seemed to have an edge in fitness. Whether that was actually the case or not is conjecture but what is certain is that K/K's work rate reached new levels and Ballycommon had to forage so hard for everything.

In the second period, K/K were irresistible – a brilliant James Gorman point and one from sub Mark Gleeson gave them a quick three point lead at the restart and with two halves of just ten minutes, that was a very decisive advantage at this stage.

Conor Dunne's free with six minutes left gave Ballycommon hope but K/K quickly shut the door. Stephen Leonard got a point that should have been a goal as he blazed over with the net at his mercy after the Ballycommon defence went missing in action. Ballycommon then found black card trouble with Stephen Conneely going off and that more or less sealed their fate as James Gorman, now firing on all cylinders, put them four clear and Cathal Donoghue got a late goal to put the icing on the cake.

For Ballycommon, defeat was a bitter pill to swallow but they gave it absolutely everything they had. They weren't quite good enough overall but they were very close to reaching the final as Aidan Bracken, David Dempsey, Jack Kenny, Robbie Conneely, Tom Mealiffe, Stephen Conneely, Conor Dunne and Gareth Mann did best for them – Conor Dunne and Stephen Conneely were particularly outstanding for them.