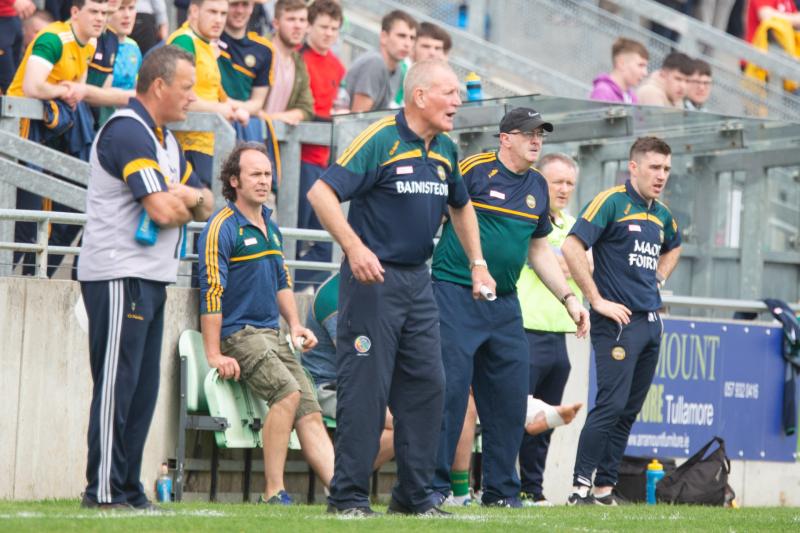 Brian Carroll (right) with fellow interim Offaly management members, Joachim Kelly and Paddy Kirwan at a game a couple of years ago.

WHILE results went exactly according to expectations, there was no shortage of talking points and controversy when the final round of group games in the Offaly Senior Hurling Championship took place on Saturday evening – a red card for St Rynagh's Joe O'Connor and an incident with a team mate that saw former Offaly hurling star Brian Carroll leave the venue in the last few minutes of Coolderry's defeat by Birr certainly provided plenty of drama.

The games took placed behind closed doors but supporters received a boost on Tuesday when it was announced that limited numbers of spectators will be allowed back into venues for the closing stages of the championship.

Under the Government's new Living with Covid plan, up to 200 people will be allowed to attend stadiums with a capacity of 5,000 or more from this Wednesday and it will be 100 people for games at other venues. In Offaly, this means that O'Connor Park in Tullamore and St. Brendan's Park in Birr could possibly host crowds of 200 people.

It will still provide a boost for people as the championships moves into the concluding stages – the Senior, Senior “B”, Intermediate and Junior Football Championship semi-finals are fixed for this weekend with O'Connor Park hosting the senior and senior “B” ones. The county ground will also host most finals.

Before spectators were banned from matches, the figure for 200 allowed included players, officials and stewards but now it is in addition to them, which will allow more people to see games.

All of this could change depending on Covid numbers over the coming week. The country is currently at level two under the roadmap guidelines and if it goes down to level one, the number allowed into bigger grounds will go up to 500. However, if it goes to level three, it will revert to the current situation where club and county championships can proceed without spectators and these will be cancelled all together if it goes to level four.

Last weekend, attention was on the hurling. With St Rynagh's and Kilcormac/Killoughey already assured of qualification in senior, the big games were the meetings of Birr v Coolderry and Ballinamere v Belmont, with a semi-final berth on the line for the winners of each.

St Rynagh's win, however, came at a serious cost as dual star Joe O'Connor received a straight red card for an off the ball incident early in the second half of their win over Shinrone. St Rynagh's were actually in a bad position at that stage as they went three points behind soon after but they built up a serious head of steam in the closing 25 minutes to win. They will be deeply concerned at the possibility of having to face Birr without O'Connor, who has been in excellent form for them at midfield in recent games – unless they can prove that the red card was shown in error, O'Connor will serve a one match ban against Birr.

While the favourites won all four games, there were plenty of incidents. In the last few minutes of the Coolderry v Birr game, there were extraordinary scenes as Brian Carroll left the field after being apparently struck by one of his own team mates. Few people saw what happened on the field three minutes from time apart from a handful of players but what is certain is that a clearly upset Carroll came over to the sideline, gathered up his belongings in the stand as stunned subs looked on and headed for the exit with substitute Martin Corcoran coming onto the field about half a minute later.

The incident was not dealt with by match officials, who may not have spotted it, but will now have to be examined by Coolderry GAA Club, who will have to deal with the fallout from it.

See Tullamore and Midland Tribune for detailed coverage of all the championship action and previews of this week's big football games.