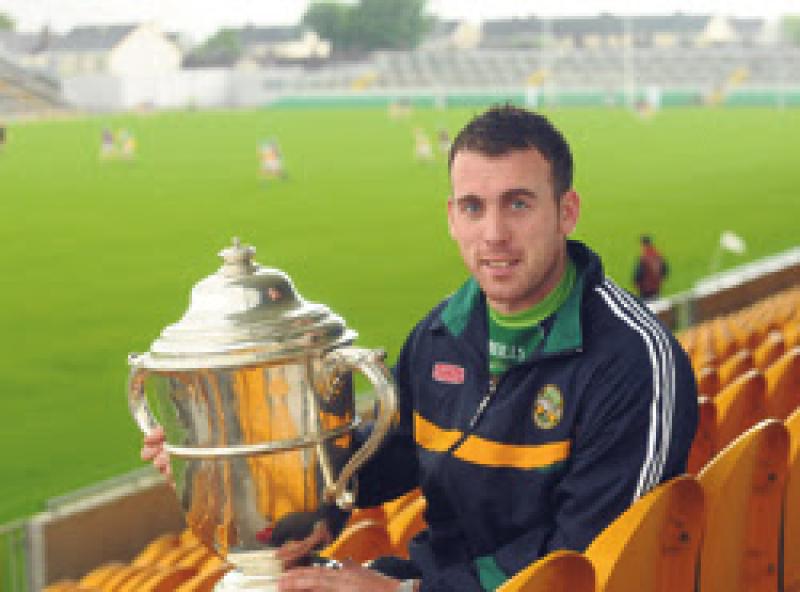 Shane Dooley and Tullamore face Drumcullen in the SHC "B" semi-finals.

FINALLY, a championship with true drama and excitement on the final day of group games. The Senior “B” Hurling Championship sprung to life fairly spectacularly this afternoon with Drumcullen shocking title favourites Kinnitty and coming up on the rails to claim a semi-final place, against the odds.

Displaying tremendous heart and character, Drumcullen edged out a titanic tussle with Kinnitty, 0-14 to 0-13 and with Lusmagh suffering a shock defeat by Kilcormac/Killoughey in the other group 2 game, it put them through to the semi-finals.

There was also drama in group 1 where Clodiagh Gaels finally clicked into gear, beating Tullamore well, by 2-15 to 1-10 to book their semi-final place. Tullamore were already through, having won their first two games but ironically their defeat may have played into their hands as they now avoid Kinnitty in the semi-finals.

Instead the semi-finals pair Clodiagh Gaels against Kinnitty while Drumcullen now meet Tullamore.

On a day of extraordinary turns and twists, Drumcullen's shock win over Kinnitty earned them top spot in group 2 – both finished on four points but Drumcullen were top on the head to head rule.

Clodiagh Gaels' win over Tullamore earned them top place in group one, with five points compared to four.

The really big losers were Lusmagh, who suffered a surprise defeat at the hands of Kilcormac/Killoughey. It has been an extraordinarily topsy turvy year for Lusmagh. Destroyed by Kinnitty in their first outing, they looked to have got back on track with a good win over Drumcullen in round 2. It meant that a win over Kilcormac/Killoughey would almost certainly have been enough to put them into the semi-final – even in the event of Drumcullen shocking Kinnitty, Lusmah's scoring difference was two points better than Drumcullen and that put them very much in pole position.

However, they didn't fulfill their end of the deal, going down by 2-18 to 0-21 to Kilcormac/Killoughey and their misery was compounded when news came through of Drumcullen's win – had Kinnitty won, it would have left Drumcullen, Lusmagh and Kilcormac/Killoughey tied on two points for the runners-up spot and Lusmagh would more than likely have went through on scoring difference.

Clara were unlucky on the final day of group games. They had a fine 2-23 to 4-12 win over Carrig/Riverstown and had Tullamore beaten Clodiagh Gaels, this would probably have put them through to the semi-finals. However, Clodiagh Gaels' win ended those ambitions, though Clara will be relieved to have avoided the relegation play off – intermediate champions last year, they have made a solid step up to the higher grade.

For Carrig/Riverstown, it has been a quite dreadful year so far. They were expected to be strong but after a narrow defeat by Clodiagh Gaels in the first round, they have gone downhill, losing all three group games.

Drumcullen's win has thrown the championship up in the air. Kinnitty are still title favourites but Clodiagh Gaels are now serious contenders with the Langton brothers, Liam and Conor their star men. The clash between these two should be one of the hurling games of the year.

Tullamore will be favourites against Drumcullen in the other semi-final but the former south Offaly giants will be absolutely thrilled to have made this stage and they won't fear their opponents in the slightest.

The games will take place on the weekend of September 26/27.