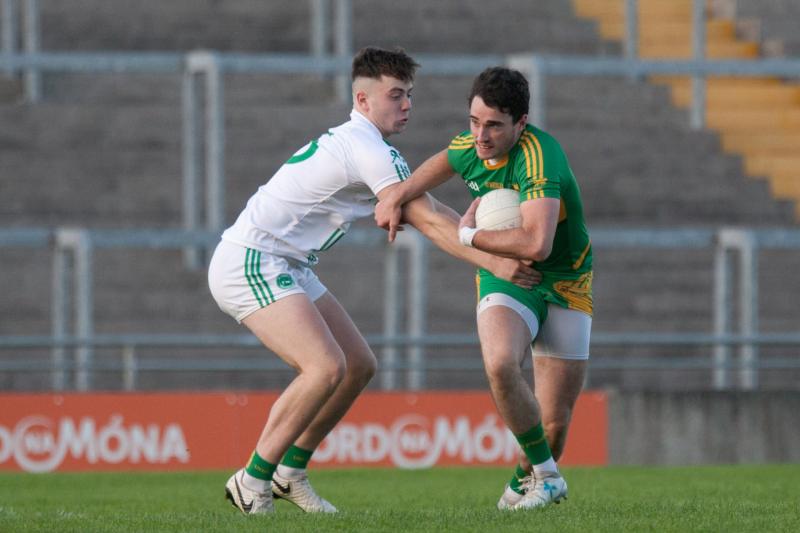 Rhode and Ferbane, on course for another final meeting

THE scene is set for the semi-finals of the Offaly Senior Football Championship after the final round of group games were played on Sunday afternoon – holders Ferbane will meet Tullamore and an inform Rhode will take on north Offaly rivals Edenderry in the semi-finals on the weekend of September 19/20 while Brack nagh and Clara will clash in the relegation play off.

On an afternoon of high drama, Tullamore were the big winners as a superb 1-17 to 0-9 win over a surprisingly outclassed Clara saw them claim a semi-final berth on the rails. Shocked by Cappincur in their first game and then well beaten by Rhode, Tullamore needed results to fall their way and that is the way it transpired.

They had to beat Clara while they then needed to overturn an 10 point scoring difference to overhaul Cappincur – they had a better scoring difference than Clara going into this group 2 game and once they got the result here, they were going to be safely ahead of their great rivals on the table. Tullamore, Cappincur and Clara all tied on two points with Rhode home and hosed on six.

With Cappincur likely to be well beaten by Rhode, it was always a distinct possibility that Tullamore would make the semi-finals but they were fiercely impressive in the way they went about their business. With young Luke Egan giving a man of the match display, Johnny Moloney and Michael Brazil showing tremendous leadership, Aaron Leavy driving them on from midfield, Shane Dooley scoring a fantastic goal and two points (one free) off the bench and younger players such as Ciaran Burns, Michael Feeney and Oisin Keenan-Martin all stepping up to the mark, Tullamore ensured that they didn't need a charity act by Rhode and fulfilled their end of the bargain by bridging that gap between them and Cappincur themselves.

As it was Rhode did it as well with a convincing 3-13 to 0-10 win over Cappincur who started brightly with the opening four points but were then forced onto the back foot. However, the magnitude of their defeat by Tullamore condemned a shell shocked Clara to a relegation play off where they will have to improve considerably to beat Bracknagh – a Clara win is far from a formality in this game and on this performance, they are in trouble.

It has been a poor year for Clara, who have went with a youth policy as they try to build a new team. This is the right policy but it leaves them in serious bother after a heavy first round beating by Rhode while they were quite fortunate to beat Cappincur in their second game. While Cappincur will be disappointed not to take a shock semi-final berth, they will be very glad to avoid the relegation play off and that represents a solid season's work for them.

The group 1 results went as expected. Edenderry didn't have everything their own way but with Alex Kenny outstanding in their attack, they did enough to beat battling Bracknagh by 2-17 to 3-10. Ferbane also had to dig deep to beat Shamrocks by 1-12 to 1-9. Shamrocks had to beat Ferbane and hope that Bracknagh got a result against Edenderry to progress – their scoring difference was too far off to overhaul Edenderry on scoring difference if they beat Ferbane and tied with the Reds on points for the last semi-final place.

Shamrocks competed well against the champions but red cards for Nigel Dunne and David O'Toole-Greene in the second half certainly did not help their cauxe – it was a particularly disasppointing weekend for Dunne as they Erin Rovers team he managed bowed out of the Senior “B” Football Championship on Saturday with a bad defeat by Gracefield.

Rhode and Ferbane have been the form teams in the championship to date, topping the groups with full points and they are on course for yet another final meeting but Edenderry and Tullamore will have plenty to say about that in the semi-finals.

Meanwhile, the semi-final lineups in the other football championships were decided at the weekend and are as follows: