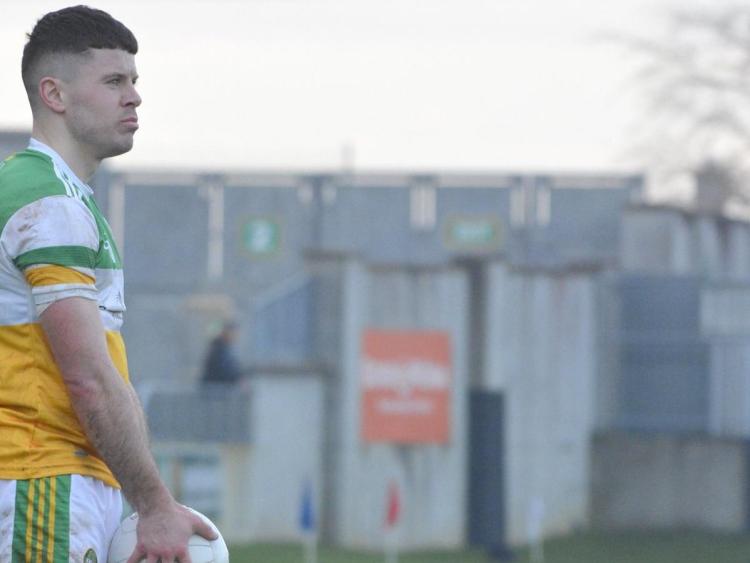 Tubber's Bernard Allen will have a big say on the destination of honours.

BALLYCUMBER scraped into the semi-fnals of the Senior “B” Football Championship by the skin of their teeth when the final round of the group stages took place this evening.

Ballycumber recored an expected win over Walsh Island, 0-18 to 2-8, but they still needed a very fancied Durrow team to mount a late comeback to beat Ferbane in their group 2 encounter.

Durrow had to rally late to beat Ferbane by 1-12 to 1-9 in the other group 2 game and their win earned them top spot in group 2 – they will now meet Tubber in the semi-finals while Gracefield, relegated from senior last year, will meet Ballycumber.

Durrow's win was a dramatic one. In outstanding form in their first two games, they looked to be heading for a shock defeat when they trailed late on but points from Kevin McDermott and a last gasp goal from sub John Murphy gave them the win,

In group 1, Gracefield showed great form as they beat Erin Rovers by 4-11 to 2-8 while Tubber also looked very good as they walloped Shannonbridge by a whopping 1-22 to 0-7.

With Tubber always expected to account for a surprisingly poor Shannonbridge side, the Gracefield and Erin Rovers match was true knockout fare with a semi-final place on offer for the winners. Gracefield did the donkey work with the wind on their backs in the first half, carving the Pullough defence apart to lead by 4-6 to 1-4 at half time. Erin Rovers fought hard in the second half and got the deficit back to six points with fifteen minutes left but Gracefield controlled the last quarter very impressively for a facile win.

And as things turned out, they needed every point of their eleven point margin to top the group and avoid Durrow in the semi-finals – Gracefield and Tubber finished the group on 5 points having drawn their earlier meeting. Their scoring difference was just one point better than Tubber's, +27 points compared to +26.

The semi-finals will take place on the weekend of September 19-20 and the championship is now gearing up for a very exciting conclusion. Niall Smith, Jack Walsh and Jamie Evans were in sensational form for Gracefield against Erin Rovers and the Laois border side are slight title favourites with Durrow a very close second while Tubber command the utmost of respect and have very realistic prospects. Ballycumber are the rank outsiders but have a proven pedigree of surprising teams at this stage of the championship.

The relegation play off will be between Walsh Island and Shannonbridge – Walsh Island's struggles have been expected while Shannonbridge have found the going much tougher than epected at the higher level, after winning intermediate last year.