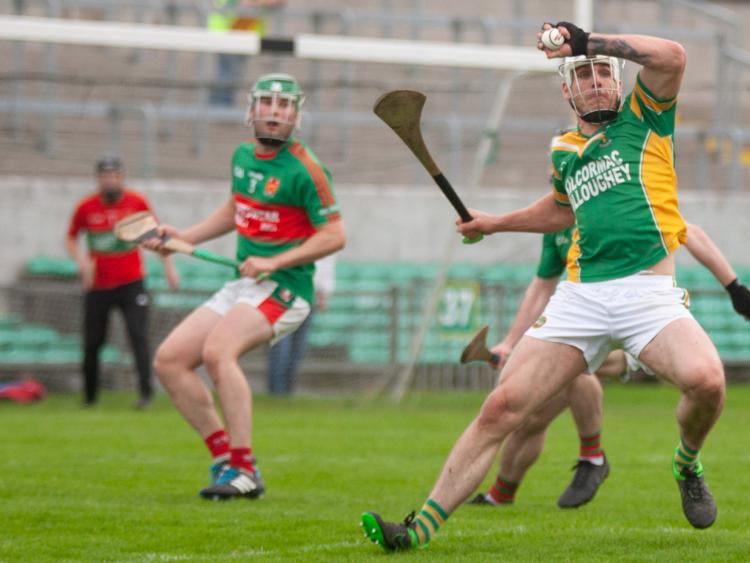 K/K hurler, Conor Mahon, is also an excellent footballer and much in the IFC depends on how they manage their dual commitments.

THE semi-final line-up in the Tullamore Court Hotel Intermediate Football Championship was completed when the final round of group games took place on Friday night.

Kilcormac/Killoughey have topped group 1 and they will meet the runners up of group 2, Ballycommon in one semi-final while the group 2 winners, St Rynagh's will take on Clonbullogue, runners up in group 1, in a semi-final that most definitely won't be for the faint hearted.

The semi-finals will take place in a fortnight's time and a thrilling finish to the championship is in store with all four teams having realistic chances.

Kilcormac/Killoughey have come into a rich vein of form in recent weeks and if they can get the balance any way right between them and their hurlers – hurling very much takes priority in K/K -, they could very well be the team to beat in this championship.

They had a run away 5-15 to 2-9 win over an outclassed Doon. The result was not a surprise as Doon have not adjusted to life in the higher grade after winning junior last year. With last year's junior footballer of the year Callum Boland having emigrated to Australia, they were always going to find it tough and they are heading to the relegation play off where they will meet Clodiagh Gaels.

Clonbullogue still go through despite a 1-8 to 0-10 defeat by St Brigid's in Rhode. St Brigid's win meant that they tied on four points with K/K and Clonbullogue but their scoring difference was nowhere near good enough to get through: -10 points compared to +28 for K/K and +22 for Clonbullogue.

In group 2, St Rynagh's had an excellent 2-6 to 0-7 win over Ballycommon to top the table. Ballycommon were already through while St Rynagh's were in pole position as they could only be denied if Clodiagh Gaels beat Raheen and overturned scoring difference in the process – St Rynagh's were on +2 points, Clodiagh Gaels on -2 going into this game. As it was, however, Clodiagh Gaels came a cropper in a parish derby against Raheen, losing by 3-11 to 0-9. While Raheen had been very poor before this, that result was not really a surprise as the Geashill-Cloneygowan club would normally expect to beat Clodiagh Gaels and they also had the very attractive enticement of avoiding the relegation play off.

St Rynagh's and Ballycommon served up a compelling game of football. Ballycommon will be disappointed at their performance but they have the redeeming factor of knowing they were already through and this may have contributed to a display where they really struggled to convert and create chances.

The concluding games of this championship will make compelling viewing and no one will be putting big money on the outcome. St Rynagh's look to be coming into form while K/K have been scoring freely in their past two games and also ran Clonbullogue very close in their opening defeat. Ballycommon were many people's fancy at the start of the season but their performance against St Rynagh's does raise some very legitimate questions. And Clonbullogue, beaten by Shannonbridge in last year's final, certainly have the talent to win this one.

Clodiagh Gaels will be favourites to win the relegation play off.