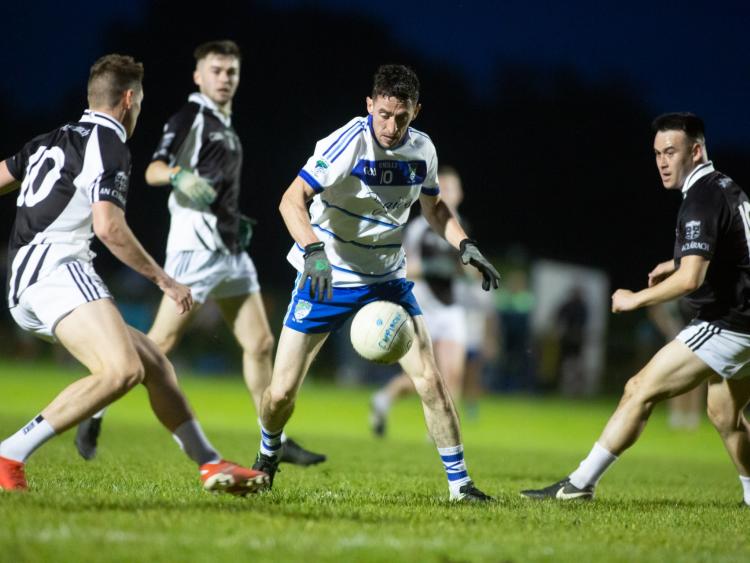 Kevin Minnock gets on the ball for Cappincur.

THE Tullamore Court Hotel Senior Football Championship is facing into an absolutely fascinating shootout after the second round of group games were played on Monday evening.

Delayed for two weeks because of the Covid-19 shutdown for Offaly, Laois and Kildare and then played in front of empty grounds following the ban on spectators at sports' events, there was still no shortage of drama and excitement.

The four results went as expected – in group 1, champions Ferbane look to be in very good fettle and they had a comprehensive 4-15 to 1-13 win over Bracknagh while Edenderry got their campaign back on track with a much easier than expected win over Shamrocks, 2-16 to 0-11.

In group 2, Rhode also continued their very impressive start with Niall McNamee on song, scoring 1-6 as they had a comfortable 1-14 to 0-8 win over Tullamore, who were shock first round losers to Cappincur. In the other group 2 game, Clara and Cappincur served up an absolutely enthralling evening in Croghan with Clara just edging it by 3-10 to 1-15.

It was an improved display by a young Clara side who were destroyed by Rhode in the first round but it was a very close run thing and Cappincur will look back on this game with huge regrets. Two of Clara's three goals came from penalties and Cappincur had ample chances to have got at least a draw. They had a golden opportunity of securing a semi-final berth but now find themselves on very tricky ground as they play Rhode in their last game.

The final round of games will take place on the weekend of September 6 and with the semi-finalists being determined, they will all be played at different venues at the same time.

Despite the surreal circumstances in which it is being played, it is arguably the most exciting championship in recent years. The format with the top two teams in each group going into semi-finals has greatly reduced the margin for error while the fact that it is being run off in a condensed time frame, despite the most recent shutdown has created a life of its own for it.

It means that we go into the final round of group games with no team out of the championship and none guaranteed a semi-final place. It doesn't get much tighter and more exciting than that though Ferbane and Rhode have been the very definite form teams. They have both won their two opening games and are sitting pretty at the top of groups 1 and 2. They should get through but it is possible for three teams to end up on four points in both those groups and scoring difference to determine the semi-finalists.

However, Ferbane's and Rhode's scoring difference is vastly superior to their competitors and it would take an extraordinary series of results for either of them to bite the bullet. Expect both to make the semi-finals and more than likely as group winners, which will keep them apart at that stage and set the scene for a potential rematch in the county final – Ferbane ended a long famine last year when beating Rhode in the decider.

In group 1, Ferbane have four points and their scoring difference is +15 points, followed by Edenderry (+7 points) and Shamrocks (-10 points) on two points with Bracknagh pulling up the rear as looking destined for the relegation play off.

In the final round, Ferbane meet Shamrocks while Edenderry take on Bracknagh. Ferbane and Edenderry will be favourites here and if these results emerge, both will go through. However, if Edenderry and Shamrocks won, then you would have three teams on four points while if Ferbane and Bracknagh win, Ferbane will go to six points and there would be three teams on two points – the head to head result determines placings when two teams are tied but scoring difference is the decisive factor when three are level.

Group 2 will make for an even more compelling conclusion. Tullamore have started very badly but Clara's win over Cappincur threw them a big lifeline – had Cappincur got a point, Tullamore would have been gone. Instead, they are alive and kicking and have a very realistic chance of progress.

Despite that, this group is very tightly poised. There is a distinct chance of Rhode and Tullamore winning their closing games and three teams ending up on two points. Cappincur have the advantage at the moment if such a scenario arises but a heavy beating by Rhode is possible. Cappincur, however, have played extremely well so far and the fact that they have such a chance of a semi-final place is a credit to the progress they have made.

There were also games in other grades on Monday night. In the Senior “B” Football Championship, Tubber had an important group 1 win over Erin Rovers, 2-10 to 0-8 while Durrow continue to set a red hot pace in group 2, blitzing an out of sorts Walsh Island by 2-21 to 2-8 to move to the verge of the semi-finals.

In the Intermediate Football Championship, Kilcormac/Killoughey made a serious statement of intent when walloping St Brigid's by 2-17 to 1-6 in group 1. They also had Clonbullogue on the ropes before losing their opening game and K/K look poised to mount a strong challenge, even if hurling is their priority.

In the Junior Football Championship, Ballinagar had to work hard before recording an important group 1 win over Kinnitty, 5-8 to 1-9 – they were well beaten by Daingean in their first game and had to win this one.

Other games continue across the senior B”, intermediate and junior grades this week and the final group games will also take place on the weekend of September 6.

See pages 50 to 53 of this week's Tullamore and Midland Tribune for reports of Monday's senior football games.