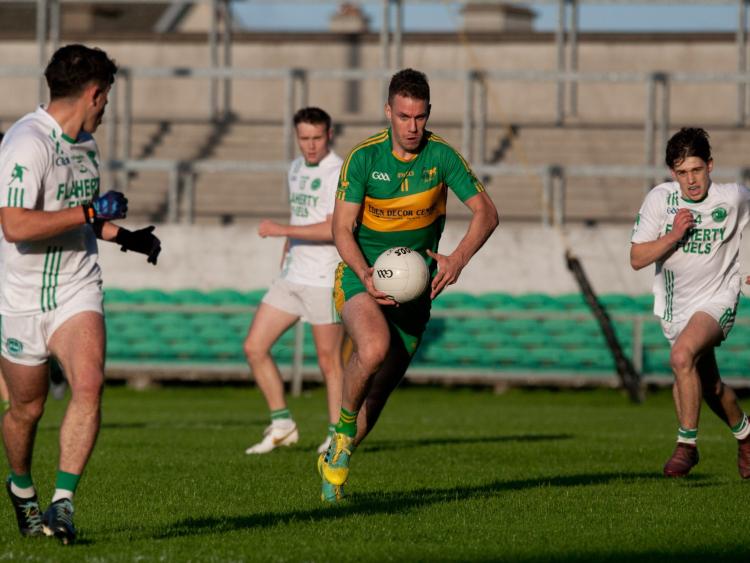 Niall McNamee, on his game for Rhode

Both Rhode and Tullamore brought plenty of intensity, pace and competitive spirit to tonight’s senior championship clash in Gracefield, but only Rhode brought a killer instinct in front of goal as they cruised to a 1-14 to 0-8 win in this second round clash.

It would be easy to say that there was 1-6 between the sides at the final whistle, which was exactly the tally racked up by Niall McNamee – and to be fair, the brilliance of the Rhode full forward was a key difference between the sides. He kicked two early marks, found space for a goal shortly before half time and generally looked capable of scoring every time he was on the ball.

Yet in general, Rhode’s kicking – both in terms of mid-range foot passing and when going for scores – was their trump card. They played the game at a high tempo, using space and keeping the ball out of contact, while Tullamore more often than not looked to barrel down the middle, albeit often with some success.

Close to goal however, only Luke Plunkett looked like posing any threat in the early stages. Once McNamee fired in his goal in the 29th minute, Rhode led by 1-7 to 0-3. A point each as added before half time, and the 2018 champions were able to keep Tullamore at arm’s length throughout the second half, with Alan McNamee, Aaron Kelleghan and Paul McPadden making significant contributions off the bench.