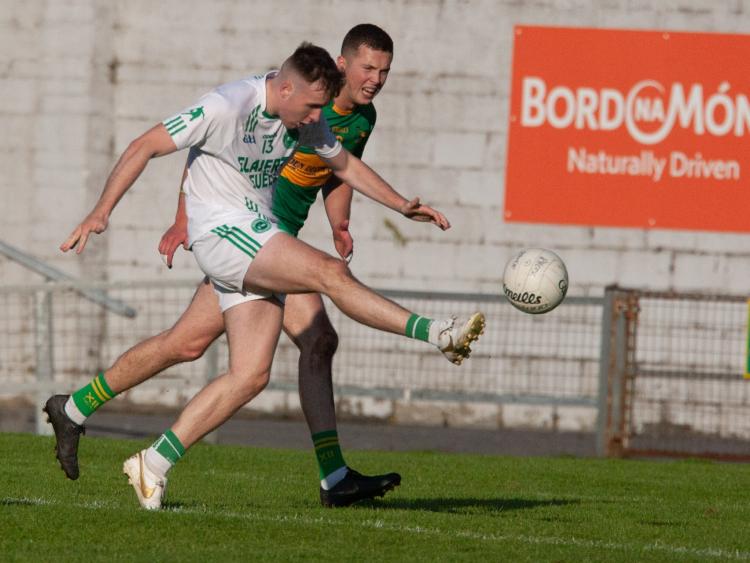 Ferbane dispatched Bracknagh in ruthless fashion in Rhode earlier tonight when they gave a clinical display of score-taking over the hour.

The scoreline is probably a bit harsh on Bracknagh who weren’t outclassed in the fashion the scoreline would suggest.

However, the difference was the movement off the ball and understanding shown between the Ferbane forwards, in particular.

Bracknagh had two other reasonable goal chances which Jack Cullinan dealt with effectively to clear the danger while Ferbane at the other end took the significant opportunities that came their way in front of goal.

Ferbane were a little more wasteful in the opening exchanges but once they found their stride, the outcome of this contest didn’t look in doubt.

When Cian Johnson scored Ferbane’s first goal to put his side five points clear it looked worrying for Bracknagh.

It might have changed were it not for a smart save when Michael Cunningham fisted first time and Cullinan got down well to save.

Ferbane quickly swept down the field and Joe Maher finished the move by finishing low to the net to open up an eight point lead.

Within minutes of the restart Cian Johnson sent an unstoppable shot to the top corner to kill any hopes Bracknagh might have had for a comeback.

This was Bracknagh’s second defeat, after their initial loss to Shamrocks while champions Ferbane will be entertaining thoughts of another county title.