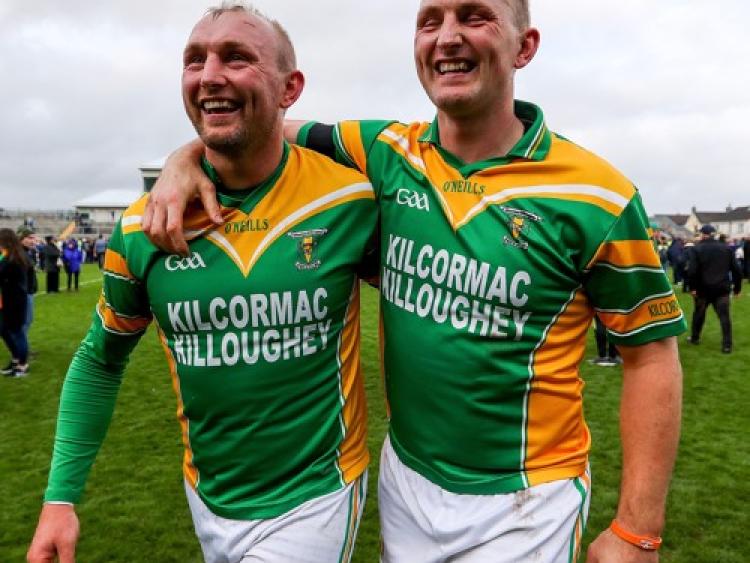 A RELIEVED Kilcormac/Killoughey claimed two crucial points in a thrilling Senior Hurling Championship opener when they had three points to spare over a brave Birr side in Banagher.

After playing second fiddle in the opening quarter and in the first ten minutes of the second half, Kilcormac/Killoughey eventually wore down their opponents in a game that they looked to be doing their best to puck away for a while late on.

Behind by 0-11 to 0-5 early in the second half, K/K were in trouble but they showed great character to wrestle it back from here. As the evening wore on and underfoot conditions became more difficult, K/K's physicality, strength and experience told save against a lighter Birr.

The introduction of the experienced Ger Healion and Ciaran Slevin off the bench helped their cause with Healion getting a point and Slevin striking two – though Slevin will be disappointed that he didn't get a couple of goals as he blasted one of his points over from point blank range and then drew an excellent from veteran Birr goalkeeper Brian Mullins with the goal at his mercy.

K/K got tweve of the closing fifteen points as Birr seemed to run out of steam. There was absolutely no disputing the merit of their win but for a while in the closing ten minutes, it looked like they were going to let Birr off the hook.

K/K got back onto level terms with nine minutes left, 0-13 each but then missed a sequence of chances. They had three bad misses before Peter Geraghty, who had an excellent evening with four points, edged them in front with a fantastic score from play. Colm Mulrooney, one of Birr's best players, equalised with a super point but with the winning post in sight, K/K drove forward relentlessly.

Slevin edged them in front with that goal chance and then drew that save from Mullins while Cillian Kiely was half hooked, tapping the ball wide, as he bore down on goals. Eventually, however, the pressure proved too much to bear on a Birr side who played really well for a good portion of this match as Conor Mahon got a great point from distance and Healion floated one over from thirty metres.

It was a hugely enjoyable game of hurling with full hearted commitment, great scores and some memorable individual displays.

There were two abiding memories of an absolutely compelling and engrossing first half – the sensational place ball striking of Birr's Eoghan Cahill and a quite imperious display of full back play by Kilcormac/Killoughey's Jordan Quinn.

With the wind on his back, Cahill's conversion rate was flawless as he scored six first half points, five of them from frees and one from a sideline. Some of them were from well inside his own half as he showed his importance to this Birr team and this was the difference between the teams as last year's beaten finalists led by 0-9 to 0-5 at half time - Cahill did miss one second half free and ultimately Birr proved a bit too reliant on frees for their scores.

Birr were clearly the better side early on and K/K had reason to be grateful to Quinn who made some fantastic catches from high ball and minded the end of the square like a baby. Birr led by 0-4 to 0-1 and 0-7 to 0-2 in the first twenty minutes as K/K found the going very tough.

However, K/K did improve as the half wore on, beginning to win more possession with wing backs Kevin, who also had a super second half, and Enda Grogan getting in crucial clearances. They got the gap back to four points with Jack Screeney, Conor Mahon and Peter Geraghty all picking off good scores from play, And they should have been closer at half time as they spurned some simple injury time chances – Cathal Kiely mishit a free, Cillian Kiely added a bad wide from play and Peter Geraghty opted to pass when a point was there for the taking.

Despite that, it meant that it was very much in the balance at half time and four points was far from irretrievable with the wind to come. The wind died down at the start of the second half and this helped Bitt who went six clear with fine points from Cahill (his first from play) and Brendan Murphy.

K/K, however, dug deep and began to get on top in a lot of sectors. They got it back to four and then took over after another Cahill free. They got four on the trot to reduce arrears to a point, 0-12 to 0-11 at the water break and they should have been level as Cathal Kiely had two poor wides, one from a free and one from play. From here on, K/K were the superior force and they eventually got the result, though they left the door open for a devastating defeat until almost the end.

Birr: Eoghan Cahill 0-8 (6f and one sideline), Paul Cleary and Colm Mulrooney 0-2 each, Craig Taylor and Brendan Murphy 0-1 each.