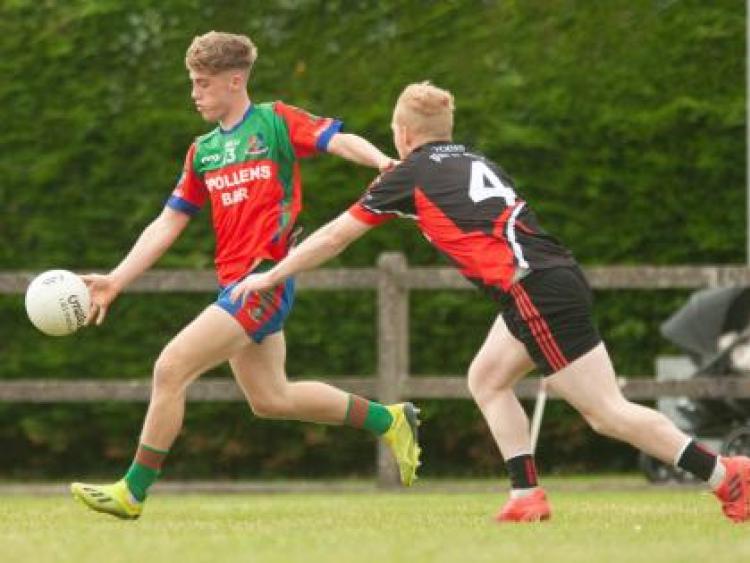 Jack Bryant, a sensational second half for Shamrocks.

A THRILLING game of football with a sensational first half display by Bracknagh that was matched by a second half one from Shamrocks saw the favourites scrape to a one point win in Bord na Mona O'Connor Park.

0-9 to 0-3 behind at half time and lucky to be that close, Shamrocks turned in a blistering second half performance to wrestle victory from the jaws of defeat.

It made for fantastic viewing, a great open and attacking game of football as both sides threw caution to the wind and went at each other.

It ended up as a shooting duel between Shamrocks' Jack Bryant and Nigel Dunne and the Cunningham brothers of Bracknagh, Peter, Mikey and Anthony. The Cunningham's got 2-8 of Bracknagh's 2-11 with Peter getting four points, Mikey 1-3 and Anthony coming forward from wing back to score 1-1.

Peter and Mikey were superb in the Bracknagh attack in the first half but it was the turn of Shamrocks duo, Bryant and Dunne to make hay in the second half. They scored all fifteen of Shamrocks' points with Dunne getting ten, three of them from play. Bryant's contribution was even more telling as his five points from play, four of them in the second half, were right out of the top drawer. Some of them just took the breath away and it was impossible not to get excited about his potential.

It was an extraordinary game of football as Shamrocks overturned that half time deficit almost in the blink of an eye as three quick fire points was followed by a neatly taken Paddy Dunican goal after Bryant resisted the urge of a tap over point and sent him in. Bracknagh responded in great fashion with Stefan Geoghegan's point followed by a Mikey Cunningham goal after a great burst forward by Jason Dempsey to put them 1-10 to 1-6 ahead after 35 minutes.

Shamrocks' physical strength told as the half wore on and they became increasingly dominant. Dunne levelled it up with four frees and then Bryant edged them in front in the 51st minute with a magnificent point from an acute angle. He followed up with a superb left footed kick before Peter Cunningham cut it to a point.

With the winning post in sight, Shamrocks went for the jugular. Dunne got two excellent points frm play and Bryant slotted over his fifth to put them four clear with time drifting away. David O'Toole -Greene spurned a great chance to kill it off and they almost paid the price as Anthony Cunningham brought Bracknagh back into it with a great injury time goal. Bracknagh, playing with such verve and intensity in their first game in top flight football in a long time, had a couple of attacks that might have yielded an equaliser but Shamrocks stood firm, got a couple of relieving frees out and held on for a crucial win.

Bracknagh played some fantastic attacking football in the first half with the Cunningham brothers Peter and Mikey torturing a besieged defence. They registered three points each as Bracknagh tore into a 0-7 to no score lead after 19 minutes,

And Shamrocks were fortunate that thety were not dead and buried as Bracknagh missed a couple of chances. Indeed, Bracknagh should have got a couple of goals. Jamie Sheridan's 9th minute point was a gilt edged goal chance while Jason Dempsey was also wide with a decent chance a few minutes later – Dempsey's miss was not as glaring as he was challenged just as he was kicking.

Still it was great football by Bracknagh and Shamrocks didn't have their first shot at the posts, a Jack Bryant wide, until the 20th minute. Nigel Dunne eventually got them off the mark with a 22nd minute free and Shamrocks improved from here to the interval. Dunne got another free and Jack Bryant got one from play but Bracknagh continued to attack with menace. Anthony Cunningham and Stefan Geoghegan kicked points and Jim Hendy was very unlucky to see his powerful shot rebound wide off the upright after the Shamrocks defence was opened up again.

A 0-9 to 0-3 interval lead represented very good work for Bracknagh though with the wind against them in the second half, Shamrocks were far from out of it.

See report in Tullamore and Midland Tribune on Wednesday for full report.