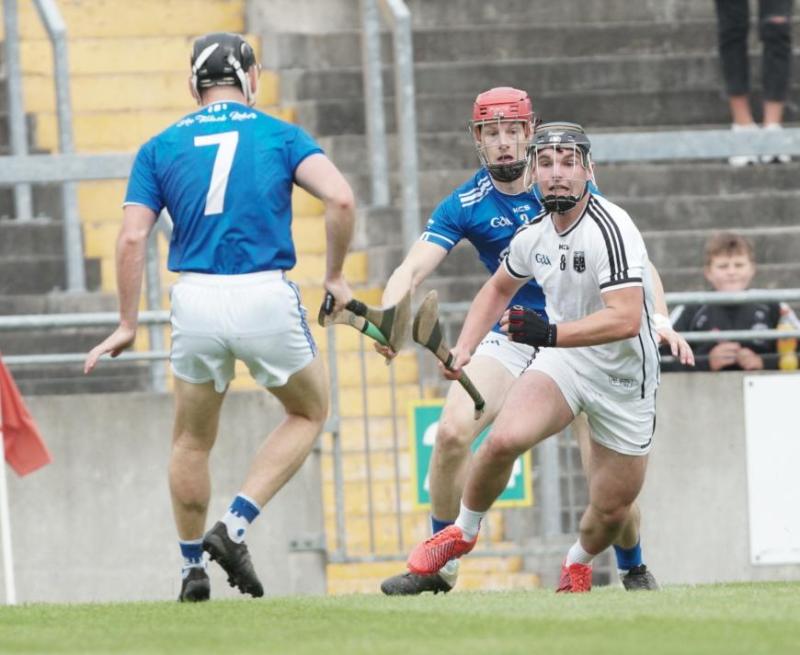 Action from the Offaly Senior B Hurling final.

TWO goals in three minutes late in the first half were instrumental in helping Tullamore to the Offaly Senior B Hurling title at O'Connor Park, Tullamore on Sunday and they will make their return to the top tier of Offaly hurling next season.

Clara remained in contention for much of the game but a late Shane Dooley goal finally put the seal on the victory for Tullamore and they were deserving victors in the end.

Both sides showed plenty of endeavour and commitment throughout in a wholehearted effort but the quality of hurling was disappointing at times. Both sides hit a lot of wides, with a total of 26 in all, 15 of them to the new champions, and the game never really burst into life.

Tullamore made a fast start with three points in the first four minutes and also went close for a goal. Clara were slow to settle and hit some early wides, including some long range frees, before finding the range after 11 minutes and they hit four in a row to go in front before Tullamore levelled and then hit two goals in three minutes to take control. The gap was four points at half time, 2-4 to 0-6.

The early stages of the second half witnessed a lot of misses from both sides and Tullamore were always able to maintain their advantage. Clara never got closer than the four point interval gap and the goal they needed to ignite a comeback never arrived despite their best efforts.

Tullamore now make the return to Senior A hurling next year and will look to make a double when their footballers take on Rhode in the Senior A final next Sunday. They very nearly made their exit from the championship at the group stage but they made the most of their opportunities when they got to the knock out stages and are now celebrating a county title win.

Over the hour Tullamore deserved the victory as they made the most of their opportunities. They settled quicker and although they missed a number of scoring opportunities they looked a little bit sharper in general.

Clara struggled for scores. It took them 12 minutes in each half to get off the mark and their starting forwards failed to score in the second half, their scores coming from wing back and two subs. They did have a couple of goal scoring opportunities but were unable to capitalise on them and that essentially was the difference between the sides.

Tullamore were strong in defence where Niall Houlihan and Ger Crowe provided a strong spine and Mike Feeney and Ger Treacy also did well. Both midfielders Gareth Mann and Ciaran Egan got on the scoresheet, while Shane Dooley was the star of the attack where Mike Fox also provided good support.

For Clara John Ledwith, Cormac Delaney and Conor Egan fought hard in their rearguard, Marcas Dalton had a good hour in the middle of the field and Josh Fleming provided most threat up front.

Tullamore made much the brighter start and Shane Dooley saw an early goal effort flash just across the goals and wide. Mike Fox opened the scoring after two minutes and Shane Dooley added two in the next two minutes, one a sideline cut. Both sides hit a number of wides as neither managed to take a grip on the game.

Clara slowly began to settle and they finally got off the mark in the 12th minute when Lorcan Hiney pointed. Alex Gavin added another and although Cathal O'Meara had the ball in the net it was ruled out for an earlier foul. Josh Fleming levelled in the 16th minute and five minutes later he put Clara ahead for the first time from a free 70m out on the right sideline.

Shane Dooley levelled from a free from 55m from his own goals after 22 minutes and a minute later they hit the front with their first goal.

Ciaran Egan won the ball about 65m out and went on a long solo run before steering his shot into the top corner of the net from about 20m out. Three minutes later they netted for a second time when a long ball from Ger Crowe broke and Shane Kelly found himself free and his low shot went into the net off the post. Two Josh Fleming frees reduced the gap to four at half time and kept Clara in contention.

Shane Dooley pointed a free four minutes into the second half but both sides missed chances. Gareth Mann got forward to score a good point before Clara's first point of the half from Conor Egan after 12 minutes. With Shane Dooley off the field temporarily for treatment to an injury, Mike Fox pointed a free but Pa Smith and Stephen Weir pointed for Clara to keep them in touch with 10 minutes left but they failed to score again.

Shane Dooley pointed a free and then with three minutes left he was on hand when Mike Fox's shot was saved well by Marius Stones, to bat the ball to the net. He sealed the win with another pointed free to signal celebrations for Tullamore.

Shane Dooley was the main man for Tullamore with 1-6 of their tally. He scored from play, frees and a lovely sideline cut. He was off the field for nine minutes in the second half receiving treatment for a head injury they missed a couple of scoring frees in that period but as soon as he returned he was on target again and then sealed the victory with the third goal.

Tullamore's first goal changed the direction of the match. After a slow start Clara had worked their way back into the game and had taken the lead but once Tullamore got the first goal, quickly followed by the second, they were in the ascendancy and didn't relinquish their grip on the game thereafter.

Declan Cooke did a good job in this game. He kept good control throughout and he consulted well with his officials, awarding a point to Clara in the second half, which had initially been waved wide, and disallowing a first half goal when there had been a foul in the build up. On the whole he did well throughout.

Tullamore almost made their exit from the championship in the group stages but now they are looking forward to a return to the top flight of Offaly hurling next year. They made the most of their opportunity and were the better team on the day.

Tullamore made the return to Senior A Hurling next year and will also get a crack at the Leinster intermediate club championship. For Clara it's back to Senior B next year to try again.

The O'Connor Park pitch looked in splendid condition for this final. A good crowd was in for a local derby and provided a good atmosphere and everything was well organised for the occasion.