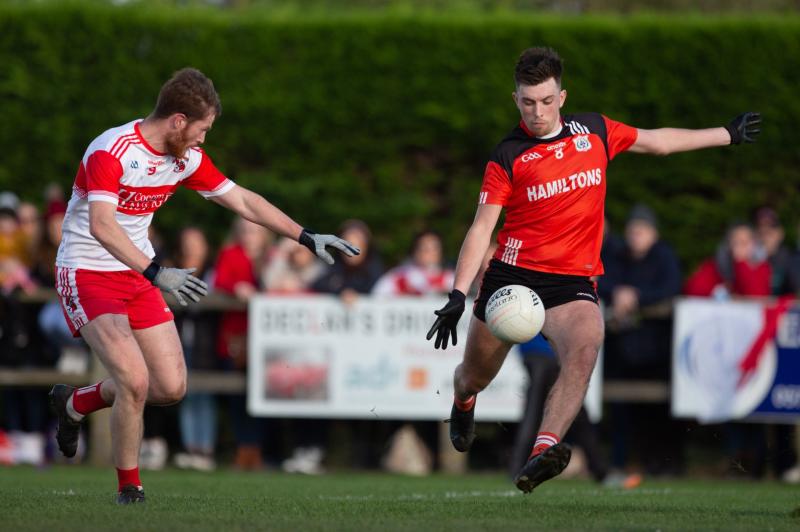 THE Offaly Intermediate and Junior Football Championship semi-finals went according to the form book when they took place on Sunday afternoon.

In the other intermediate semi-final, Ballycommon beat Tullamore by 0-13 to 1-8. Ballycommon led by 0-6 to 0-3 at half time. They opened up a gap in the second half but Tullamore came back at them and Ballycommon held on for a deserved win.

As expected title favourites, Kilcormac-Killoughey and a young, emerging Ballinagar team made the Offaly Junior Football Championship final when the semi-finals took place on Sunday afternoon.

Kilcormac-Killoughey were pushed hard before getting the better of a very hard working Rhode, 0-11 to 0-7 in Gracefield.

Kilcormac-Killoughey led by 0-5 to 0-4 at half time and finished strongly to win by four points. It was a significant win for Kilcormac-Killoughey who lined out minus flying forward Alex Kavanagh who scored 3-4 in their last group game while Peter Geraghty has gone back to Dubai. U-20 All-Ireland winning star Cathal Donoghue also went off after shipping a heavy knock – Donoghue just came back recently following a long lay off with a knee injury but thankfully it doesn't seem to be related to that.

Ballinagar were delighted to beat Edenderry by 0-15 to 0-8 in the other semi-final in Clonbullogue. Ballinagar went out minus some of their best players – another Offaly U-20 winning hero Morgan Tynan is out for the season with a hamstring injury while Ryan Strong is injured and his twin, Adam Strong is in Texas on a college placement.

It meant that Ballinagar were without some of their strongest and most physical players but they produced a fine second half to win. Ballinagar led by 0-7 to 0-5 at half time and restricted Edenderry to just three points in the second half – Ballinagar opened up a gap after a few minutes of the second half and were able to hold that to the finish.

The constant rain made conditions a lottery but the form book was upheld in both semi-finals – K-K will be favourites for the final but will be taking nothing for granted against a young Ballinagar who have a lot of exciting young players.