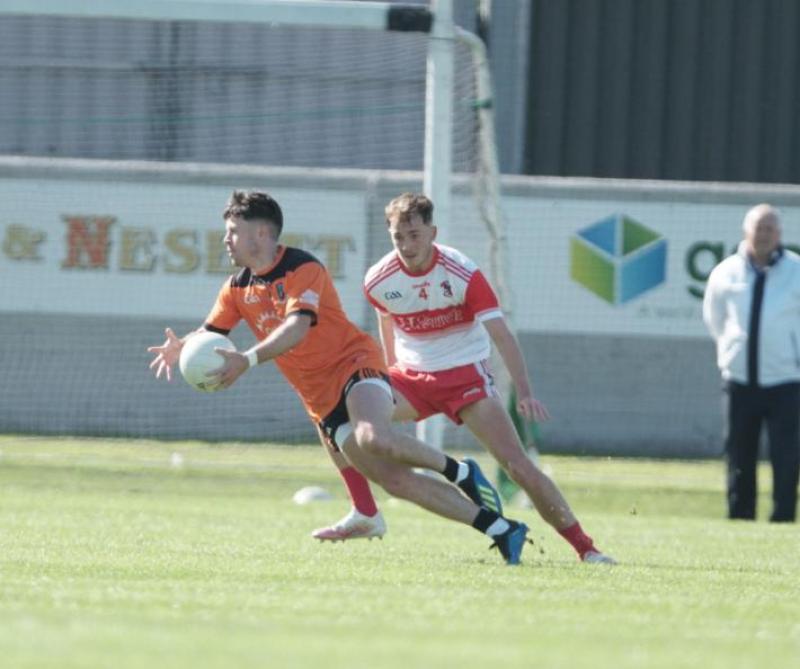 THEIR introduction and likely impact may have been a obvious as the nose on your face but super subs Keith O'Neill and Jamie Guing did everything that Clonbullogue could have hoped for when helping them into the Senior “B” Football Championship final in Tullamore on Saturday afternoon.

With neither starting because of injury, they always represented Clonbullogue's trump card here and they helped get them out of jail in normal time and then power them across the line in extra time.

Guing came on at half time with O'Neill, clearly uncomfortable with a hip injury but still making a significant impact, on the field six minutes later – unfortunately O'Neill had to be helped to the sideline after sustaining a hefty knock near the end of extra time and that was one blemish on the afternoon for the winners.

The other was late red cards for subs Darragh Hickey and Peter Byrne who got sent off for their role in a melee with time almost up – along with Tubber's Dan Kelliher, Ciaran Allen, Bernard Allen and Sean Farrell. That was an unfortunate end to a game that was tough but fairly contested up to that point.

Within two minutes of O'Neill coming on, Clonbullogue were in serious bother a Patrick Farrell's goal helped Tubber to a 1-7 to 1-4 lead. Tubber still led by three with thirteen minutes left but didn't score again as Clonbullogue got the final three points to force extra time.

In extra time, they were the clear masters, getting control in the first period and holding on quite comfortably in the second period.

Guing got 1-5 off the bench, 1-3 from play and it was a huge intervention while O'Neill got one point but had a number of assists and even if he never got a kick at the ball, the Tubber defence were immediately on high alert.

There was a lot more to Clonullogue's win, however, and they could not have done it without the defensive excellence of Jamie Quinn and Eddie Bennett while Jack McEvoy made a great contribution in midfield and Ruari O'Neill also showed his class and importance to Clonbullogue in attack.

It was a disappointing end to a topsy turvy season for Tubber. They struggled in the group but were very good against Ballycumber in the quarter-final. They had a final place within touch here but didn't close it out, missed chances when a point up that would have got them across the line and ran out of steam and ideas in extra time.

Eddie Kavanagh, Lee Colgan, Joe Higgins, Ciaran McManus, Bernard Allen and Patrick Farrell impressed for them but once extra time emerged, it was always likely that a younger Clonbullogue would get there.

Clonbullogue had made a flying start with Joe Foran and Shane O'Brien wide with early goal chances. There was very little between the sides in the first half and Tubber missed a great chance in the 26th minute when Lee Colgan blasted a penalty over the bar.

They suffered for that when Clonbullogue broke through for a 29th minute goal – Pauric Robbins lost the ball, Clonbullogue broke fast and Joe Foran goaled to give them the lad. A Ciaran McManus free for a foul that saw David Dempsey black carded left Tubber trailing by 1-3 to 0-5 at half time.

Tubber got on top in the second half. They were ahead by the 36th minute. Impressive sub Jamie Guing equalised for Clonbullogue before Patrick Farrell got a 38th minute goal after a Bernard Allen pass to put Tubber 1-7 to 1-4 ahead.

Tubber still had that three point lead, 1-9 to 1-6 with thirteen minutes left but couldn't score again as Clonbullogue threw the kitchen sink at them. Two Guing frees brought it back to a point and both sides missed chances before Jack McEvoy showed great composure to convert a “45” with the three minutes of injury time almost up, 1-9 each.

Clonbullogue grabbed control of the game in the first period of extra time. After the sides swopped early points, Clonbullogue attacked with great pace and got 1-3 without reply – the goal was a brilliant finish by Jamie Guing in the 64th minute after Keith O'Neill sent him in. Eoin Dunne's point left Tubber trailing by 2-13 to 1-11 at the end of the first period and in desperate need of inspiration.

In the second period of extra time, Clonbullogue's advance was never in danger. Tubber never looked like breaking through for goals and Clonbullogue outscored them by four points to one.

Jamie Quinn (Clonbullogue): While Jamie Guing made a powerful intervention off the bench, this boiled down to a choice between Jamie Quinn and Eddie Bennett. Both were immense in the defence and Quinn gets the nod as he kept a very tight reign on Bernard Allen late on, making great tackles and interceptions.

Kevin Williamson is a very good emerging referee and he did well here. Tubber did complain at some frees that went against them once they got three points up and you could see where they were coming from with a couple but these balanced out overall. The sending offs came after a melee and he consulted at length with his officials before showing them.

The introduction of Jamie Guing and Keith O'Neill.

It is a great time for Clonbullogue. They won intermediate last year and are now just one game from senior.

Clonbullogue play one of parish rivals, Bracknagh or Walsh Island in the final.