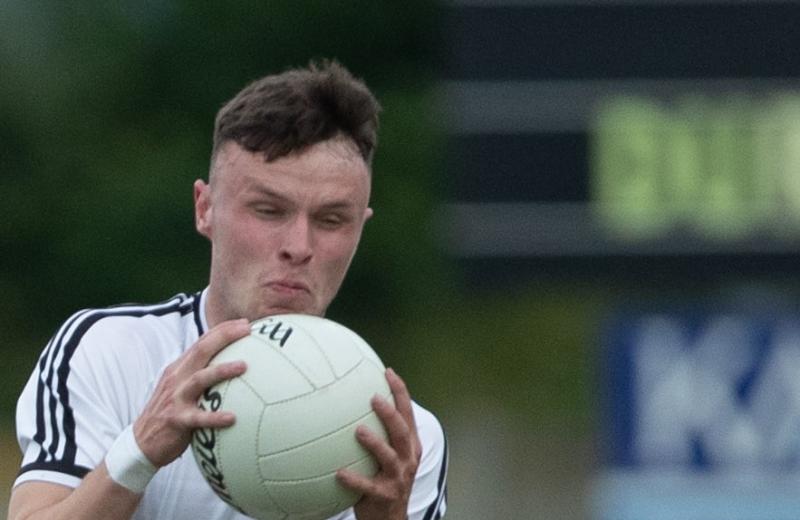 LADY luck certainly did not smile on Clara as they gave a very brave effort but still came up short against Rhode in their last group game in the Tullamore Court Hotel Senior Football Championship in O'Connor Park on Sunday afternoon.

A first round win over Durrow means that they have still qualified for the quarter-finals. They needed Edenderry to beat Durrow on Sunday afternoon to get through and as expected, that result duly arrived.

As it was, Clara competed better than their earlier form suggested they would here, even if the game was out of their reach by the three quarter-way stage.

It could, however, have gone right down to the wire as Clara paid a dear price for a first half sending off, the concession of a goal almost on the stroke of half time and the leakage of a very soft goal eight minutes into the second half. They then finished the game with 13 men after corner back Alan Gavin was stretchered off almost on the 60 minutes when they had their full quota of subs used.

In a bizarre incident, Clara had introduced a sixth sub for Gavin, Tomo Devine and he made one lightening sprint down the field in a support role before they were told to take him off by referee Eamon O'Connor.

The sending off of one of their brightest young prospects Marcas Dalton in the 20th minute undermined what was a very good first half display by Clara.

They were trailing by 0-6 to 0-5 at that stage but had been marginally the better team when Dalton picked up a deserved red for a stamp on Conor McNamee. It was an unfortunate incident for Clara and Dalton, who had been playing very well. He had won a free on his own half back line and unfortunately as he tried to escape McNamee who had grabbed his leg, he stamped back. It was an instinctual rather than a real malicious stroke by Dalton but it was a definite red card offence and it loaded the dice against Clara.

They recovered well with the next three points from Pa Smyth (2) and Cormac Delaney (f) to lead by 0-8 to 0-6 coming up to half time. Clara were good value for that lead but it unravelled for them before the break, A lovely point from Ruari McNamee, sublime in the first half, was followed by an excellent individual goal from Anton Sullivan in injury time to give Rhode a 1-7 to 0-8 half time lead.

A very fortunate goal for Rhode eight minutes into the second half left Clara with a mountain to climb. There appeared little danger as a long shot from Stephen Hannon bounced and appeared to be sailing over the bar. Instead, it hit the upright, landed perfectly for Niall McNamee who had the easiest of tasks in punching to the net. Ruari McNamee added a quick point for a 2-8 to 0-9 lead and that gave Rhode enough of a cushion to get home.

It is to Clara's credit, however, that they fought to the bitter end and ensured Rhode had to work the whole way. Rhode were 2-10 to 0-11 ahead on 21 minutes but Clara got the next two to make it a three point game. Rhode were able to respond when the real questions were asked. Clara were able to get the gap back to three a couple of other times but Rhode continued to break at peace as Shane Lowry, Anton Sullivan and Ciaran Heavey got relieving points to keep them just out of range.

It was a somewhat subdued performance by Rhode. They didn't fire on all cylinders but they were up for the game and produced flashes of excellent, fast moving football. Keith Murphy, Dylan Kavanagh, Conor McNamee, Ruari McNamee, Shane Lowry and Niall McNamee caught the eye at different spells. Rhode did what they had to do, just enough and the impression remains that they had more in the tank – they could have got another couple of goals here and made life very comfortable for themselves.

Clara can be very pleased with their display. It was a vast improvement from the horror show that they provided in their last game against Edenderry and they were clearly eager to prove a point. Carl Stewart, Ed Cullen, Ross Brady, Cormac Delaney and Pa Smyth were among their stand out performers on a day when every player gave his all.

Ruari McNamee (Rhode): He may have drifted in and out of the game but the quality of Ruari McNamee's play just took the breath away at times. He scored four points, a couple of them absolutely delightful ones, and his passing and footballing intelligence created a lot for Rhode.

Eamon O'Connor refereed this very well. He was in control and clearly knew the rules. He was not afraid to make a big call when it came to dishing out a red card to Marcas Dalton and he was very consistent.

The 20th minute red card for Marcas Dalton was a huge moment. Clara went very well in the first half but that loaded the dice against them.

The O'Connor Park pitch was superb, though there was a very small crowd and a very subdued atmosphere here.

Clara's display here was the big thing out of this game. It suggests that they can compete at this level, even if they are not on the short list of championship contenders at the moment.

Rhode are in the semi-finals while Clara have to wait for the result of Ferbane and Shamrocks to discover who they will play in the quarter-finals.