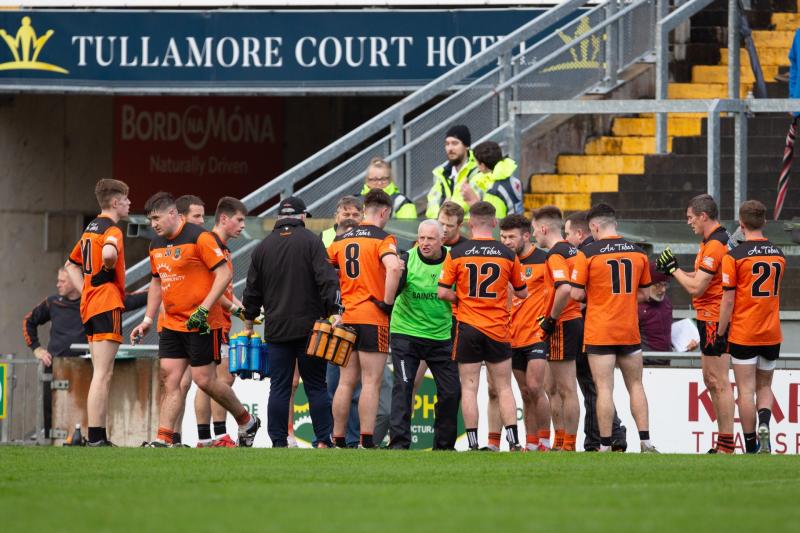 TUBBER kept their season alive when a win over Erin Rovers in their last group game was enough to get them into the quarter-finals of the Offaly Senior “B” Football Championship on Friday evening.

With Clonbullogue beating parish rivals Walsh Island in the other group 1 clash, Tubber's 1-17 to 1-11 win got them through. After losing their opening two games to Clonbullogue and Walsh Island, it was pure knockout football for Tubber – as well as Erin Rovers.

Once Clonbullogue beat Walsh Island, the meeting of Tubber and Erin Rovers was a winner's take all encounter with the winners going out and the losers into the relegation play off.

Tubber looked like winning nearly all the way, leading by 1-6 to 0-4 at half time and keeping a gap in the second half. Clonbullogue's convincing 4-12 to 1-11 win over Walsh Island earned them top spot on the head to head rule – they tied on four points each – and they go straight into the semi-finals.

St Rynagh's had conceded a walkover to table toppers Bracknagh in group 2 earlier in the week and the only issue at stake here was who finished second and third. Second spot went to Gracefield after they had a good 1-16 to 0-14 win over Ballycumber. Ballycumber had only scored two points when losing to Bracknagh in their last game and scoring was problematic for them in the first half here as they trailed by 0-10 to 0-5 at the break. They scored better in the second half but not well enough to pull off the win.

Bracknagh also go into the semi-finals as group winners and Friday's results mean that the quarter-final pairings are:

The relegation play off will be between Erin Rovers and St Rynagh's, who will be expected to field despite their unfortunate walkover to Bracknagh.

The biggest result of the night was Tubber's win and they could now emerge as serious contenders. Beaten in the final last year and knocking on the door for a few years, they have the potential to get very strong, even though one of their best forwards, Ian Daly was playing his last game of the season against Erin Rovers as he departs for Australia soon. Gracefield have also improved this year and their quarter-final against Tubber should be a cracker while Walsh Island and Ballycumber also looks to be a 50-50 game.