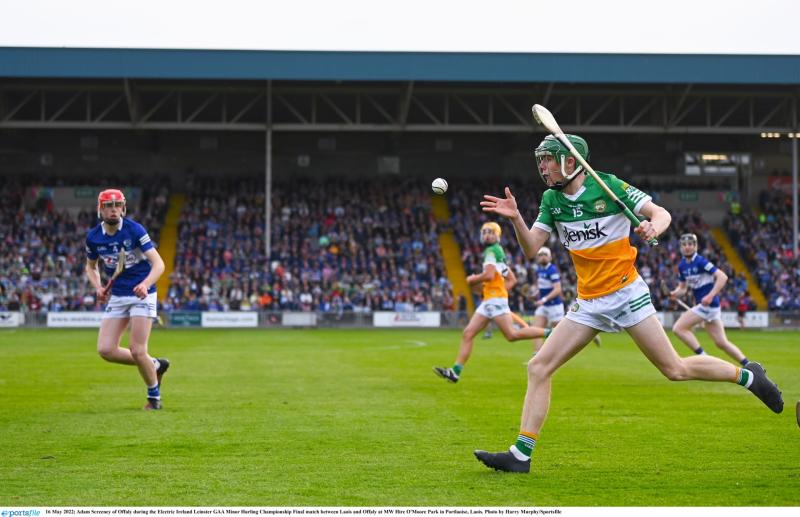 FLYING Offaly forward Adam Screeney has been named as the 2022 Electric Ireland GAA Minor Star Hurling Player of the Year.

The Kilcormac-Killoughey man has been announced as the outstanding player in the 2022 championship after some sensational forwards in the Offaly attacked.

Offaly performed heroics in 2022 as they won the Leinster Minor Hurling Championship and were only denied victory by a controversial late Tipperary goal in the All-Ireland final.

The team of the year was unveiled on Tuesday morning and both Offaly and Tupperary have four representatives on it. Kilcormac-Killoughey's James Mahon is full back, Tubber's Donal Shirley wing back, Durrow's Dan Ravenhill is centre half forward and Screeney is corner forward. The four Tipp players selected are Sam O'Farrell, Adam Daly, Paddy McCormack and Tom Delaney.

Electric Ireland are the All-Ireland Minor Hurling Championship sponsors and the team of the year also includes three Galway representatives and two each from Laois and Clare.
A brilliantly skilful forward, Screeney had a magnificent All-Ireland final and scored 5-51 from play and frees during Offaly's march to the final.

The team was selected by a panel of GAA experts and was determined in part by Electric Ireland’s ‘Minor Moments of the Week’ initiative on Twitter via @ElectricIreland and #GAAThisIsMajor.

2. Ciarán Flynn (Laois and The Harps)

The Electric Ireland GAA Minor Star Football Team of the Year and Football Player of the Year will be unveiled on Tuesday, 16 August.