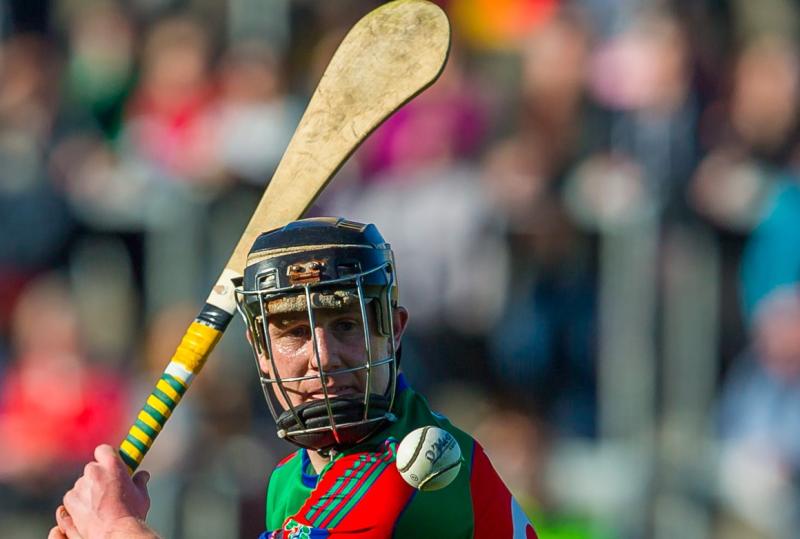 Shamrocks booked their place in the Intermediate Hurling semi-final on Sunday morning with a five-point victory over Coolderry. Despite being level at half-time, Shamrocks shot seven out of the last nine points to push them over the line and guaranteed their spot in the semi-final of the championship.

It was a real battle in the first half between two evenly matched teams and Coolderry gave as good as they got in all sectors of the field.

Andy Connolly was causing Shamrocks some serious problems in that first half and they notched over some impressive scores.

However, their challenge seemed to fade in the second half as Shamrocks stood tall and began to dominate. Conor Condron, Padraig Cantwell and Nigel Dunne were all exceptional for The Rocks and they will be relieved to have avoided another disastrous defeat in their quest to return to Senior ‘B’ hurling.

It was ideal weather conditions for the game and the sunshine contributed to an entertaining half of hurling with very little between the two teams.

It was very much point for point in the opening half and neither team looked like pulling away from their opponents with the heat and battle of Championship hurling in full swing.

Coolderry opened proceedings through before Nigel Dunne equalised soon after from a placed ball.

It was a tight affair in the opening 10 minutes before the game sprung to life. Andy Connolly picked up a break and he raced towards the Shamrocks goal before burying home for the game’s first goal.

David Molloy caused the Coolderry defence a lot of problems in the first half. He slotted over a beautiful point after some impressive wrist work to bring it to a three-point game after 18 minutes of play.

Soon after his point, Molloy was once again causing problems and he raced towards the Coolderry goal and unleashed a rocket which flew past Coolderry goalkeeper James McKennan to level proceedings.

Shane O’Toole Greene put Shamrocks a point ahead after the goal but Coolderry were quick to respond and they were level soon after with a fantastic effort from Declan Parlon from the sideline split the posts.

The sides exchanged points in the closing stages with Andy Connolly and Nigel Dunne trading frees and Conor Moran’s point in injury time of the first half meant the sides were level at Kieran Dooley’s half-time whistle.

Upon the resumption of play, Connolly and Dunne traded two points each for their side in the opening few minutes of the second half.

Co-incidentally, Connolly’s free in the 38th minute was Coolderry’s last score for nearly 15 minutes as Shamrocks gained a foothold.

They gathered momentum and shot five unanswered points as they looked to finally pull away.

Nigel Dunne shot four while Alan Foster also raised the white flag as Shamrocks pushed their lead out to four.

Connolly briefly reduced the deficit to three points with eight minutes left to play, but Stephen Malone increased the Shamrocks lead once again with a monstrous effort from distance to nudge them four ahead again.

Connolly once again reduced the gap to three again but Shamrocks never looked like losing or letting Coolderry back into it.

Another Nigel Dunne point and a Shane Heffernan score right at the death ensured Shamrocks were victorious as they booked their place in the semi-final in two weeks’ time.

Nigel Dunne (Shamrocks): Padraig Cantwell was also exceptional but Dunne shades it. He notched over six points from play and he was instrumental when Shamrocks began to pull away. He will be disappointed with a couple of wides, but he is such an important cog to the Shamrocks wheel.

Nigel Dunne’s point in the 50th minute which put Shamrocks four points clear. They never looked back from here and while Coolderry did briefly reduce it to three, Shamrocks never looked like losing.

After a disappointing group campaign, which saw them lose two out of their three group games, Shamrocks are back into the semi final for a third consecutive year. They have limped into the semi-finals but they have come in under the radar. They lost their management team right before the championship started and after losing the first round, relegation looked more likely. However, they are in the pot for the semi-final now and they won’t fear anyone.

Kieran Dooley was in control of the game at all times. There wasn’t one dirty stroke pulled, making Dooley’s day at the office a simple one.

Crinkill hosted the game excellently and there were no issues.

Shamrocks advance to the semi-finals while Coolderry’s year is over.