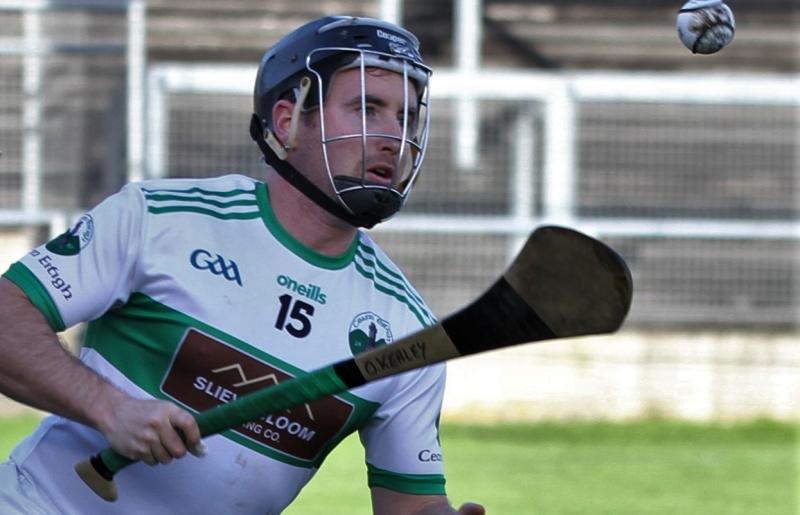 KINNITTY almost caused the upset of the season when getting a very deserved draw with St Rynagh's in the Senior Hurling Championship in Coolderry on Sunday afternoon.

Displaying tremendous courage, heart and determination, in the second half especially, Kinnitty were not far away from a sensational win. A draw might have been a fair result but a surprisingly vulnerable St Rynagh's were there for the taking and it would not have taken a lot more for Kinnitty to have won.

The result was still a huge one for Kinnitty and they now play Birr in the last round, knowing that a draw will be enough to put them through. With five points, St Rynagh's are safely into the quarter-finals and the winners of them and Kilcormac-Killoughey will go into the semi-finals as group winners.

It was Kinnitty's biggest result in the senior championship in years and it will give them great confidence and heart. They were way too loose in the first half, even though they competed well for much of it but once they tighetened up in the second half, the possibility of an upset began to loom into view.

Kinnitty matched St Rynagh's in most facets in the first half and a Shane Kinsella goal in the fourth minute put them ahead 1-1 to 0-3. Kinsella, who had dropped an early chance short, added a point from play and Kinnitty were value for their 1-3 to 0-4 lead after eight mkinutes.

Then St Rynagh's began to find form. Their forwards benefitted from some very slack marking but still floated over some quality points. Three in a row from Gary Kelly, Aaron Kenny and Stephen Quirke had them 0-7 to 1-3 ahead after 12 minutes.

Kinnitty regained the initiative with a Jason Armstrong point and a very soft 17th minute goal when Conor Clancy didn't clear and in the ensuing scramble the ball ended up in the net – it may have been an own goal, though Odhran Kealey was in the vicinity.

That gave Kinnitty a 2-4 to 0-7 lead but Rynagh's were back on terms by the 20th minute. Aodan Kealey edged Kinnitty in front but St Rynagh's got back in front with an Aaron Kenny goal in the 22nd minute. Kenny caused fierce problems for Kinnitty in the first half, scoring 1-5 from play and it was 28 minutes before the underdogs reacted by switching Willie Molloy off him, moving Paddy Rigney over and bringing Conor Hardiman back into defence – Molloy was very loose in the first half but ended up doing a lot of excellent work out the field in the second half as Kinnitty dug in.

St Rynagh's began to move with more menace coming up to half time and a 1-15 to 2-8 interval lead suggested that this match would go as expected.

Kinnitty, however, read from a different script. While their first half display was not bad and they had laid down important markers, they began to do the basics of tackling, closing down and work rate much better. Both sides missed chances before St Rynagh's conceded a crazy penalty with Conor Hernon cutting down Shane Kinsella as they were about to clear their lines in the 33rd minute. James Dempsey tapped the penalty to the net. Rynagh's got the next two points to lead by three but more poor defending allowed Dempsey in for an equalising 39th minute goal, 4-8 to 1-17.

Without truly putting the foot to the floor, Rynagh's steadied thing and Kenny's free put them back ahead. Kinnitty had a big let off when goalkeeper Niall Corrigan fumbled the ball and Niall Wynne was penalised for fouling as he hit the ball to the net. Inside the closing quarter, it looked like Kinnitty might come up just short.

St Rynagh's led by 2-19 to 4-9 after 45 minutes but points from Dempsey and Odhran Kealey got Kinnitty back to within two. They had it back to a point with five minutes left. Dermot Shortt got an excellent 58th minute point to put Rynagh's back in front but Kinnitty were relentless in the way they went for everything. Danny Flanagan, brilliant in the closing fifteen minutes, got a point and then James Dempsey equalised two minutes into injury time from a free after Tommy Leahy was fouled by Gary Conneely.

While they will have been disappointed not to have won it, Kinnitty will be delighted with the draw. Their second half performance commanded the utmost of respect as they worked with great hunger. Their defence were never comfortable and it is ironic that two of their players who were exposed, Willie Molloy on Aaron Kenny and Paddy Delaney on Stephen Wynne also did a lot of trogan work as did James Hardiman. Danny Flanagan was immense while James Dempsey did very well in their attack and Odhran Kealey sprung to life in the second half before tiring and being replaced near the end. Kinnitty also owe a debt of gratitude to Conor Meaney. A half time sub and not long back from a cruciate injury, Meaney was instrumental in Kinnitty's getting the result – he began to take St Rynagh's on, he revelled in the physical stakes and his runs helped inspire all around him.

St Rynagh's won be analysing this game or performance too much. They weren't fully tuned in, they were off the boil a bit but you wouldn't want to read too much into it - they are in the knockout stages and they are the title favourites. At the same time, it is a result and display that will give hope to everyone else aiming to dethrone the four in a row seeking champions.

Ben Conneely, Paul Quirke, Stephen Quirke and Aaron Kenny really stamped their mark on the game for long periods for them while Joey O'Connor and Niall Wynne had very good spells.

Danny Flanagan (Kinnitty): Aaron Kenny was the best player on the field in the first half while Stephen and Paul Quirke were excellent for St Rynagh's. The choice is Danny Flanagan. He defended very competently for Kinnitty and really rose to the challenge in the second half. He helped get them out of jail when moved to midfield late on as he got a point and delivered in quality ball.

Richie Fitzsimons had a good steady game, though there were a couple of times in the second half when Kinnitty could have been awarded frees in – he was unsighted for one certain foul on Danny Flanagan in the 50th minute and overall these results balanced out.

Danny Flanagan's 61st minute point was crucial. It brought the gap down to one and meant that a point was enough for Kinnitty to draw it.

Coolderry's location at the very south corner of Offaly means that they don't get many games but they have great facilities and clearly take great pride in them. They had plenty of stewards here, most making their way back from their intermediate quarter-final defeat by Shamrocks. They hosted the crowd very professionally and their pitch was in great condition.

The handpass rule has become a big issue in hurling. A lot of players are getting away with illegal handpassing and while that wasn't very evident here, it didn't stop both sides demanding a free every time a ball was passed with the hand. It is all adding more pressure onto referees.