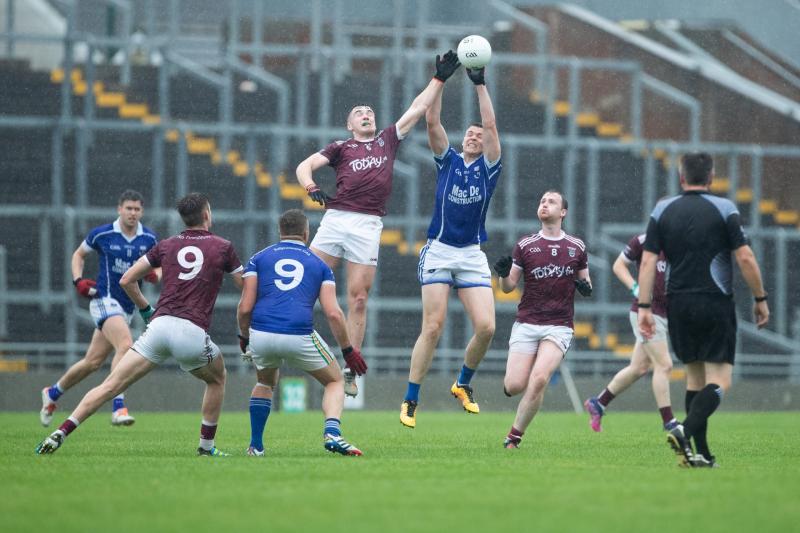 Cathal Ryan and Tom Mealiffe contesting a high ball during Ballycommon and Daingean.

Championship favourites Raheen have qualified for the knockout stages in the Offaly Intermediate Football Championship.

Raheen are top of group 1 with four points from their two games and can't be denied a quarter-final place while group 2 is up in the air after Shannonbridge didn't fulfill their fixture against Ferbane at the weekend.

Shannonbridge ran into difficulty, citing a Covid outbreak in their camp and the Competitions Control Committee will now have to decide whether to award the points to Ferbane or grant a refixture.

Technically, Shannonbridge's failure to play may have to be regarded as a walkover and that is the most likely outcome but the CCC will be making a decision on this on Wednesday evening and the possibility of a refixture can't be ruled out. Teams who didn't fulflill fixtures during the Covid years of 2020 and 2021 had to concede walkovers and the CCC may be unable to go away from that but time will tell and the stance of Ferbane may also have an influence – the CCC are operating on a very tight calendar and need their championships to run on schedule.

The outcome of that will have a major bearing on what happens in group 2 where Ballycommon are top with three points from two games and Daingean have two from two. Ferbane have one from one and Shannonbridge have none from one.

In group 1, St Brigid's and Tullamore have two points while Clodiagh Gaels have none. Raheen secured at least a quarter-final place as they had to work hard to beat parish rivals, Clodiagh Gaels, 1-11 to 2-6 last Friday evening. St Brigid's, badly beaten by Raheen in their first game, resurrected their season with a fine 1-14 to 0-14 win over Tullamore on Sunday, rallying powerfully in the second half to claim the points.

In the final round, Raheen meet Tullamore and Clodiagh Gaels meet St Brigid's. A draw will be enough to put Raheen in the semi-finals. Clodiagh Gaels have to beat St Brigid's to stay in the championship and this group presents the possibility of three teams finishing on both four and two points.

If Tullamore beat Raheen and St Brigid's beat Clodiagh Gaels, three will be tied at the top on four points. Raheen, Tullamore and Brigid's would all be through and scoring difference would decide placings with the top team into the semi-finals – Raheen are +15, St Brigid's -10 and Tullamore +5 while Clodiagh Gaels are -10.

Daingean did well to draw with Ballycommon, 1-10 each, in a parish derby on Saturday but detailed analysis of this group is pointless until the CCC determine what to do with the Shannonbridge and Ferbane game. However, if Shannonbridge do lose those points, Ballycommon and Ferbane will be through and Daingean will go through if they get a point off Shannonbridge in the third round.

In the final round, Ballycommon play Ferbane and Daingean meet Shannonbridge. Ballycommon will almost certainly qualify and the other two places are up for grabs – though the CCC decision on Wednesday will present the definitive picture.