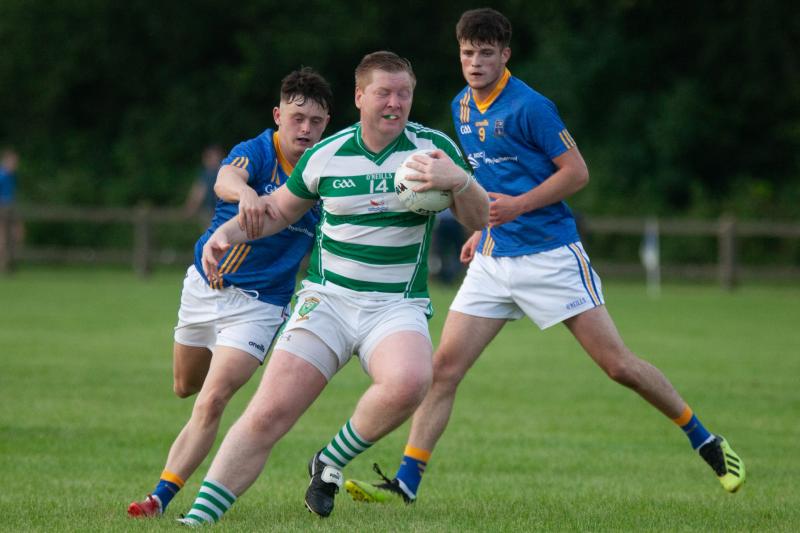 Walsh Island and Bracknagh are safely through in the SFC "B"

THERE was plenty of talking points when Round 2 of the Tullamore Court Hotel Senior “B” Football Championship took place last weekend.

The first thing to grab attention was the continued excellent form of Walsh Island as they secured a quarter-final place with a surprise win over Tubber: Bracknagh are into the semi-finals while Ballycumber and Gracefield are assured of quarter-finals out of group 2 with St Rynagh's in the relegation play off, irrespective of results in the final round of group games.

The second attention grabber was Erin Rovers bouncing back into contention after a shocking first round defeat to Walsh Island while the third was Bracknagh securing their place in the semi-finals after beating Ballycumber in a remarkably low scoring and defensive group 2 encounter. And the fourth is the struggles of last year's beaten finalists, Tubber who have lost two games and are staring an early exit in the face.

With one round to go and some fancied teams struggling or showing inconsistent form, it means that no clear cut favourites have emerged – Bracknagh are slight favourites but there are a few teams who will fancy taking them on and they certainly won't be booking a celebration dinner dance yet.

It remains very wide open and there will be plenty of twists before the season is over. Walsh Island have done brilliantly so far. Expected to be in the relegation battle at the start of the year, they destroyed Erin Rovers in the first round and grinded out a hard earned but fully deserved 0-12 to 0-11 win over Tubber on Friday evening.

Walsh Island's form commands complete admiration and respect. They have a limited pick with numbers an issue and are relying on some veteran war horses but they are performing to the best of their ability. They play very effectively to a system and now meet parish rivals Clonbullogue in the final round in group 1. A point here will put Walsh Island into the semi-finals but if Clonbullogue win, they could top it and go into the last four – if Erin Rovers don't beat Tubber in their last game, then Clonbullogue will top it on the head to head rule with Walsh Island. If Erin Rovers beat Tubber and Clonbullogue beat Walsh Island, you would have three teams on four points and scoring difference deciding placings. Walsh Island are in pole position if this happens, unless they got a really bad defeat against Clonbullogue – Walsh Island's scoring difference is +15 points.

Erin Rovers' first round defeat by Walsh Island suggested that they would not be at the races this year but they bounced back spectacularly last weekend with a 2-11 to 0-15 win over Clonbullogue.

It means that the race for the other two knockout berths from group 1 is red hot. Walsh Island are through with four points while Erin Rovers and Clonbullogue have two each and Tubber are bottom of the table with no points.

It leaves it all very simple for Tubber who have not ignited at all yet but could emerge as very serious contenders if they do get out of jail. They must beat Erin Rovers in their final group game and if they do that, it will get them through. If Clonbullogue get a result against Walsh Island, it will leave Tubber and Erin Rovers tied on two points but Tubber will go through on the head to head rule. If Clonbullogue lose and Tubber win, then they will be tied with Erin Rovers on two points and scoring difference will decide – however, Tubber will still get through in this scenario as their scoring difference will be better than Erin Rovers. At the moment, Erin Rovers are -12, Clonbullogue +1 and Tubber -2.

A draw will be enough for Erin Rovers and that result would put Tubber into the relegation play off. A point will be enough for Clonbullogue against Walsh Island but even if they lose, they will probably scrape through. The only way they can be denied is on scoring difference if three teams tie on two points and it is most unlikely if they will lose by a big enough margin against Walsh Island to put Erin Rovers ahead ahead of them – the score of the Erin Rovers and Tubber game would also have a big bearing but Clonbullogue should be okay.

Group 2 is done and dusted. Bracknagh have four points, Ballycumber and Gracefield have two and St Rynagh's have none. Last weekend, Bracknagh secured their semi-final place with a 0-8 to 0-2 win over Ballycumber. Bracknagh led by 0-2 to no score at half time and as the scoring suggests, this game did not make for pretty viewing but that won't worry Bracknagh as they are guaranteed top spot and a semi-final.

Even if Bracknagh lose to St Rynagh's in their final game, they can't be denied top spot. The winners of Ballycumber and Gracefield would join them on top spot but Bracknagh have beaten both of them and will go into the semi-finals on the head to head rule.

Gracefield had to work hard to beat St Rynagh's by 2-7 to 1-6 in the other group 2 game at the weekend. This means that Ballycumber and Gracefield have two points and both are certain to qualify. Even if St Rynagh's did shock Bracknagh, they will still go out on the heads to head rule as they have lost to both Ballycumber and Gracefield – three teams can't tie on two points in this group and in the event of them tieing with either Ballycumber or Gracefield, they will still be gone and they will be in the relegation play off.