Clinical Rhode have too much for brave Durrow 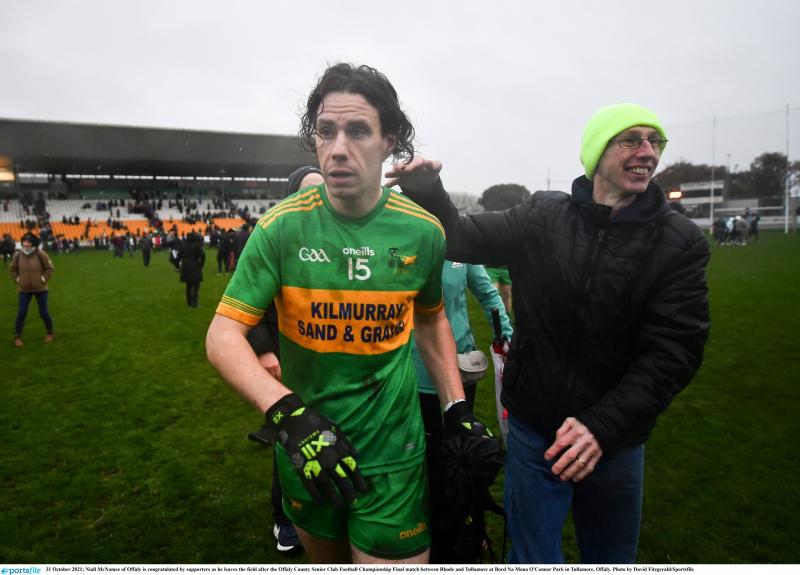 On a wet and dull Saturday evening in Gracefield, Durrow and Rhode served up an entertaining encounter. Durrow needed a strong performance to topple the strong Rhode outfit and despite an admirable effort, Rhode had more than enough to see them off.

Rhode started the better, racing into a 1-5 to 0-1 lead after 15 minutes. Ruairi McNamee was tremendous in centre forward, pulling the strings and converting some lovely scores. Niall McNamee was also in super form, remaining clinical from frees and grabbing a goal at the end of a wonderful team attack.

Durrow appeared to struggle breaking down the Rhode press, but their perseverance and patience was rewarded by a series of frees which were duly converted by goalkeeper Stephen Fitzgerald. Micheal Mooney was again a serious competitor around the middle, while Jack Fogarty, Ross Ravenhill and Brian Geraghty battled hard to stop Rhode’s charge up the field.

At half time it was 1-10 to 0-5, Rhode were firmly in the driving seat. However, to Durrow’s credit, they flew out of the blocks in the second half. The lively Mark Troy bagged a goal immediately after the restart. From this, Durrow piled the pressure on Rhode’s kickouts where they forced two more unanswered points courtesy of Ciaran Burke and Kevin McDermott.

Incredibly, Rhode were kept scoreless for the first 15 minutes of the second half. This was down to the hard work and determination of the Durrow men, not to mention their ability to punish in front of the posts. With the score now 1-10 to 1-07, the game had opened right up.

This did not last much longer as Anton Sullivan, who had been a constant threat in the first half grew back into the game, helping to drag his team back into the ascendency. As Rhode resisted the Durrow pressure, Keith Murphy and Conor McNamee were really good performers for their side. In the forwards Shane Lowry got on some good ball, while it was Ruairi and Niall McNamee who made the difference, ensuring Rhode were out of sight by the closing stages.

Overall, this was an entertaining affair albeit in awful conditions. The referee allowed play to flow and there were very few notable decisions. In the end Rhode had too much for Durrow, whose gutsy display proves that Edenderry have a difficult game ahead. Meanwhile, Rhode were deserving winners and face Clara next with a quarter-final in the bag while Durrow must beat Edenderry to have any chance of avoiding the relegation battle..