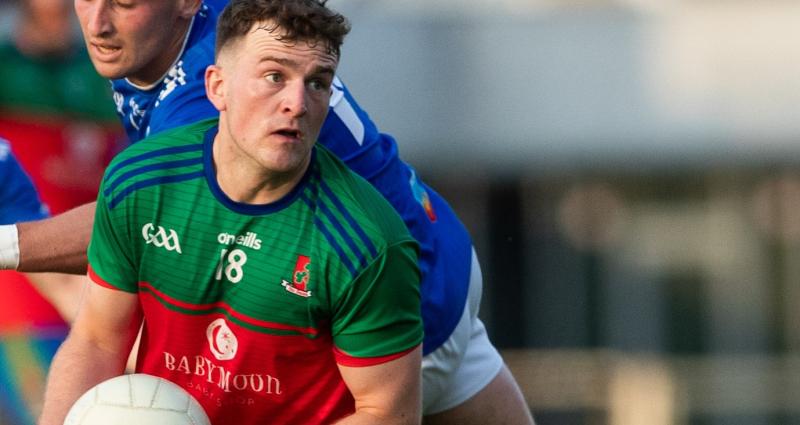 WITH their championship lives flashing in front of their eyes, Shamrocks produced a much improved second half display to keep their season alive with a win over Cappincur in O'Connor Park on Saturday evening.

Shamrocks were absolutely dreadful in the first half. They were miles off where they needed to be, struggling all over the field and their 0-6 to 0-2 half time deficit was an accurate reflection of the way they played.

In the second half, however, they were much better, outscoring their opponents by 2-8 to 1-2 for a deserved win. It wasn't anywhere near as comprehensive as the final score line might suggest. Shamrocks' closing two points from Jack Bryant and Nigel Dunne came deep in injury time and they got them across the finish line – ironically those points came after they had been reduced to fourteen men when Sean Cantwell was red carded in the 59th minute with referee Fergal Smyth signalling that he had kicked in a brief melee.

Tempers had become frayed late on as both sides played on the edge but that was a welcome change from a remarkably pedestrian and poor first half. In a much better second half, both sides showed how much they wanted it and it provided much greater intensity and entertainment.

Twice Cappincur had almost got in for an equalising goal inside the last five minutes. Sean O'Toole, back in goals after missing the first round, had almost fumbled a Sean Courtney delivery into the net with three minutes left on the clock while Scott Delaney rescued the winners a minute later with a remarkable goal line save from Courtney – though Bill Carroll possibly should have took on the shot himself instead of passing.

It was a frantic end to a frantic second half and Shamrocks lifted the siege to get those final two points and the win they needed.

The stakes were huge here. Shamrocks had lost to Tullamore in their first game while Cappincur did very well to draw with Ferbane. It was must win knockout football for Shamrocks while a point would have done Cappincur very nicely. It now means that Shamrocks are favourites to advance to the quarter-finals with Cappincur in the relegation play off, though you never know and Ferbane's result against Tullamore on Sunday afternoon will tell a lot more about the shape of this group.

Shamrocks did well to turn things around in the second half. They were so poor in the first half that it almost defied belief and there is no doubt that Shamrocks received a stern lecture at half time. The Shamrocks football supporter can also be a fairly critical person and the players would have been fully aware of the implications of a defeat here. They came out with all guns blazing in the second half and had the game turned on its head in the blink of an eye. A Paddy Dunican point from a mark was followed by a well taken Jack Bryant goal to level it up in the first minute of the restart.

Kieran Dolan was just wide with a goal chance before Alan Heffernan fired Shamrocks in front. They took complete control with a punched goal from Dunican in the 35th minute after Nigel Dunne did very well. Suddenly Shamrocks were 2-4 to 0-6 ahead and Cappincur were buckling at their knees. David Carroll and Nigel Dunne exchanged points before Heffernan put the winners 2-6 to 0-7 ahead.

Paddy Dunican was wide with a half goal chance and just when it was looking like Cappincur woul be blown out of the water, they rallied powerfully. They got right back into it when Bill Carroll punched a goal after Ger Treacy brilliantly rattled the underside of the crossbar with a rocket of a shot – a ball watching Shamrocks defence should have cleared the danger.

Ciaran Farrell's point made it a one point game and it was wide open. Shamrocks responded very well and a Nigel Dunne free followed by a lovely Paddy Dunican point after a great break forward by Shane O'Toole-Greene put them 2-8 to 1-8 ahead with ten minutes left.

There was great excitement and tension in the closing spell as both sides went at it with everything they had. Cappincur needed a goal and almost got one while at the other end, Nigel Dunne took the wrong option when opting to shoot instead of passing to Andrew Delaney who was unmarked inside near the goals.

Ultimately Shamrocks got away with it and their ability to break fast was telling. Jack Bryant's point to put them four in front was an example as Shane O'Toole-Greene put a great ball into space, Bryant collected it, raced forward and floated over a quite fantastic score.

Bill Carroll was the best player for a brave, resolute Cappincur side who also had good displays from Brion Carroll, Diarmuid Carroll, Ger Treacy and Sean Courtney but ultimately their attack hadn't the fire power to get the job done. You have to admire the way Cappincur have survived at senior football level for a few years and the way they are competing this year. They are a a great example of a club making the most of what they have but their limitations were exposed in the second half here - they simply have't a strong enough panel, they have a few weaklinks on the field and they are swimming against the tide.

In a very mediocre first half, Cappincur were the better side by a distance and fully deserved their 0-6 to 0-2 half time lead.

Cappincur played okay in the first half without being anything special but Shamrocks were way off the pace.

Cappincur did the basics well in terms of tackling and working hard, doing the simple things but all those things were a struggle for Shamrocks.

The Rahan-Mucklagh club managed only two points in the first half and that was a fair reflection in the way they played. The first came from Alan Heffernan to level it up at 0-1 each early on and the second was a 19th minute Nigel Dunne free. That left them trailing by 0-4 to 0-2 but Cappincur got the closing two points from Peter Daly and a Sean Courtney free for that half time lead – Bill Carroll had got two superb points for them earlier on.

Nigel Dunne (Shamrocks): Nigel Dunne was a major factor in Shamrocks' win. He drifted out the field to win ball, distributed superbly and also got four points, including two crucial ones from play. He should have passed to Andrew Delaney instead of shooting in the second half but that was the only real blemish on his display.

Fergal Smyth had a good game though he lost his way a bit late on as tempers became frayed. He did particularly well to spot one foul by Alan Heffernan in the second half when he had a hands off on a defender while in possession – it is a foul that is often not spotted or ignored by referees. His decison to hop one ball late in the second half after awarding a free to Shamrocks was questionable – Cappincur appeared to be as much the instigators of the brief altercation as Shamrocks and it nearly ended up being a Cappincur goal.

Alan Heffernan's point in the 39th minute was memorable for the audacious dummy by Paddy Dunican who let the ball through his legs to him. It came during a spell of sustained Shamrocks pressure and put them 2-6 to 0-7 ahead.

The O'Connor Park pitch held up very well despite a lot of rain. The match was well hosted though it is worth noting that Cappincur did not line out as numbered in the programme with midfielders Ger Treacy and Bill Carroll wearing the wrong numbers – that is a basic that clubs should always get right.

The poor quality of some of games, the lack of excitement and the tame atmosphere. The first half of this game and the Edenderry v Clara game on Friday evening did nothing to excite the senses, though at least the second half rescued this one..