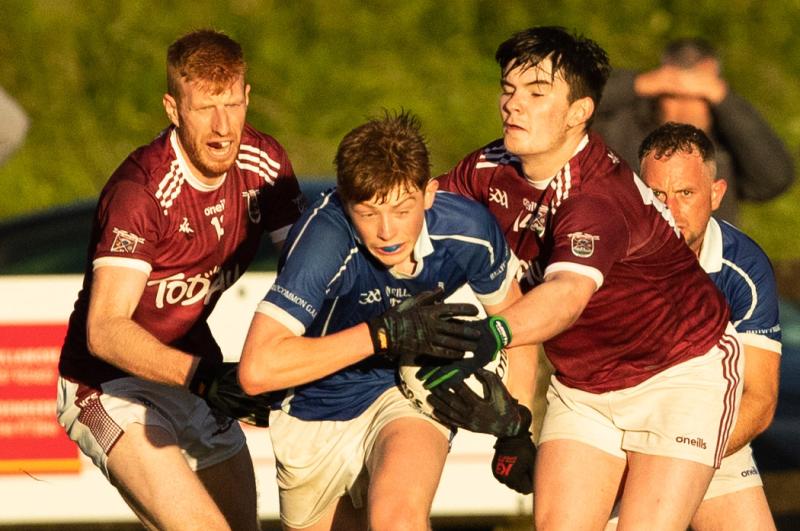 Ballycommon and Daingean played out an entertaining draw.

DAINGEAN were the happier side after drawing with Ballycommon in a well contested parish derby in the Tullamore Court Hotel Intermediate Football Championship in Tullamore on Saturday evening.

A Jamie Hayes free two minutes into injury time, softly awarded for a tackle on Cathal Ryan, gave Daingean the share of the spoils but apart from that, Ballycommon will feel they should have won.

Ballycommon had eleven wides compared to just one from Daingean and that shows who enjoyed the majority of possession. They had ample chances to have won it while they also missed a great goal chance 14 minutes into the second half when Daingean goalkeeper Conan Curley made a fantastic save from Christopher Kenny – it was one of those ones where the goalie deserves huge credit but the forward will harbour huge regrets as Kenny was just five metres out and it really should have hit the net.

It was a good, entertaining game of football, played in very difficult conditions. There wasn't much between them and while Ballycommon had way more of the ball, in some ways Daingean deserved a draw. They played better in the second half, playing with more pace whereas Ballycommon were guilty of slowing things down and not playing with pace or real intensity. It was a definite part in them not winning the game.

Ballycommon were the better team in the first half with a well taken Tom Mealiffe goal putting them 1-4 to 0-3 ahead in the 19th minute. Gareth Mann's point put them 1-5 to 0-3 ahead before Daingean got back into it with a very good Odhran Connolly goal.

It was 1-7 to 1-4 at half time and Daingean played their best football in the third quarter. They attacked well and got four of the first five points to draw level, 1-8 each after 42 minutes. It was in the balance from here to the finish with Ballycommon dominating possession but rarely driving at Daingean.

Ballycommon got their noses in front twice in the closing quarter as both sides struggled to score. Gareth Mann put them 1-10 to 1-9 ahead with two minutes left but that 62nd minute Hayes free earned Daingean a share of the spoils.

Daingean worked very hard over the hour, turning the ball over regularly and they did well to draw. It was a day when their main forward Shane Tierney was kept out of it by county star David Dempsey but Jamie Hayes rose to the challenge scoring seven points, two from play. Cathal Ryan, Adam Bolger, Scott Milne and Cian O'Reilly also played well for Daingean.

It puts Ballycommon on three points in the group while Daingean now have two. Shannonbridge didn't fulfill their fixture against Ferbane after a Covid outbreak and the points are likely to be awarded to Ferbane, though this may be challenged.

Tom Mealiffe (Ballycommon): Tom Mealiffe got through a mountain of work, putting in heavy hits, working hard and using the ball well at midfield.