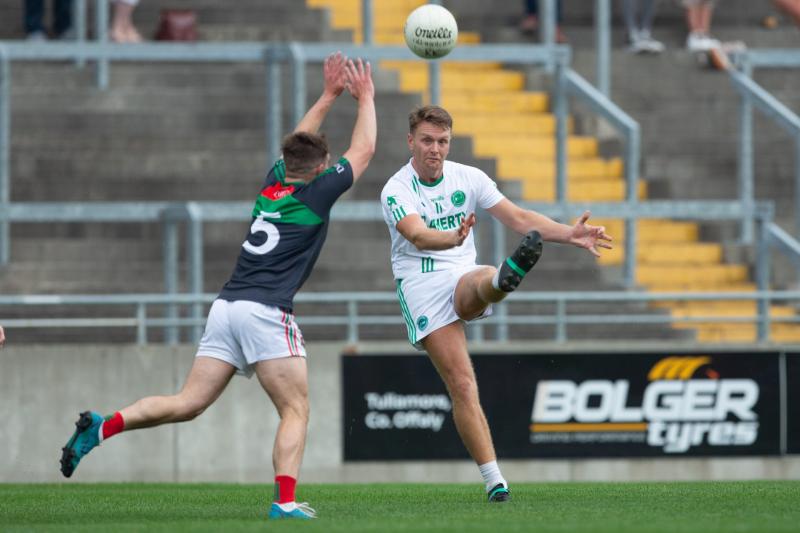 Joe Maher and Ferbane have a big game against Tullamore.

NO team will be definitely out after the second round of the Offaly Senior Football Championship next weekend but the stakes are getting very big for some teams.

Shamrocks in group 1 and Edenderry and Durrow in group 2 have the pressure on after losing their opening games. A second defeat will stack the odds against them though the possibility remains of three teams finishing level in both groups.

The top team in each group goes into the semi-final with the next two in the two quarter-finals. The bottom team meets in a relegation play off.

After one round, Tullamore top group 1 with two points, Ferbane and Cappincur have a point each and Shamrocks have none.

Rhode and Clara have two points in group 2 while Edenderry and Durrow are waiting to get off the mark.

While neither Cappincur or Shamrocks are likely to be around on county final day, their meeting on Saturday is the most attractive one at the weekend. The stakes are huge for both sides with the winner likely to head to the quarter-finals and the losers in the relegation play off.

Cappincur had an excellent draw with Ferbane in the first round and should have won that day. Shamrocks competed very well against Tullamore for forty minutes but fell away badly in the closing twenty. This is a real 50-50 game and the point Cappincur won against Ferbane is a very important one. Cappincur will perform well while Shamrocks are more unpredictable but have potential match winners in forwards Jack Bryant and Nigel Dunne.

Tullamore are the championship favourites and are moving very nicely while there are now serious doubts about Ferbane's credentials. They were poor in their league final defeat by Tullamore and their draw with Cappincur in the first round raises more questions about them.

Tullamore are without young stars John Furlong, Cormac Egan and Oisin Keenan-Martin but are still a very formidable, finely tuned team. Ferbane were without Cian Johnson against Cappincur. They really need him back as they search frantically for their best form. Tullamore look to be a step ahead of Ferbane but this is a very tricky game for them. It is not far off 50-50 and the Ballycumber venue will suit Ferbane. Tullamore are well capable of losing this one and a Ferbane win would not be a big surprise but the form book is the most reliable guide.

Durrow were missing several first team players through injury and illness for the first round, yet were within a point of Clara. They could have won but now find themselves on tricky ground with Rhode next up.

Durrow shocked Rhode in the first round last year before the tables were turned in the semi-finals. They will be hoping to do the same again here but the odds are against them. They should be much stronger with most of their players back and Durrow have a very decent senior football team. Rhode looked good in their first round win over Edenderry and have an excellent forward line with Niall McNamee, Anton Sullivan, Ruari McNamee and Aaron Kellaghan all capable of hurting. Durrow will push them but Rhode are favourites.

This will be an interesting game and we will learn a lot about Edenderry in particular. They were very close to Rhode in the first round, despite missing the injured Cian Farrell. They are likely to be without midfielder David Hanlon for this one – he was red carded late on against Rhode and will be a big loss.

Clara got a very important win against Durrow and this sets them up nicely. Their main aim this year is to consolidate and retain senior status. They are in pole position for that and a quarter-final place is within touching distance, though the possibility of Durrow taking a scalp and changing things is considerable. Clara will give this a lash and it is a banana skin for Edenderry. The reds will need to be fully tuned in but the stakes are huge and should ensure they are on the ball.