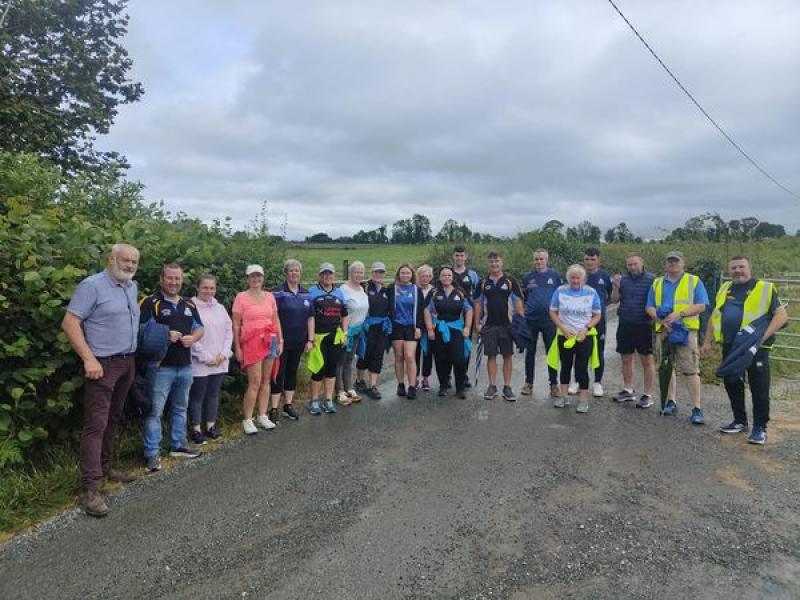 Arlene and Sean Beatty with the Clodiagh Gaels team of walkers as they pay tribute to the late Donal Beatty.

THE Offaly GAA Grand Canal Walk raised over €143,000 for the County Board and clubs in the county when it took place last Saturday.

On Tuesday morning, the figure raised was €143,449 and this is likely to rise further in the coming days before the fundraising venture is shutdown.

The fundraising event has proven to be a resounding success since being instigated by the Offaly GAA Supporters Club, Club Faithful a few years ago.

It was extended last year in scale with the County Board making it a joint fundraiser between them and clubs. Clubs are asked to get walkers to raise funds and everything is split 50-50 between the club and the board.

The County Board will have cleared a bit more than clubs as some walkers raised funds for them alone but it was still a very financially rewarding venture for clubs.

Golf hero Shane Lowry boosted the County Board's take with a €20,000 donation from himself, family and golfing friends. Lowry had given the board a boost by backing the walk a few weeks ago and he raised the highest amount, €20,235.

192 walkers participated and a particularly big effort was made by Clodiagh Gaels. The Killeigh-Killurin outfit used it as a tribute to one of their most cherished members, the late Donal Beatty, who died last March.

A native of Tullamore but living at Fintir Lane in Killeigh for several years, Donal was a passionate GAA supporter and worker. He gave great service to Clodiagh Gaels and the underage Na Fianna Minor Club and his premature death after a battle with illness devastated his family and community.

His death was a hugely emotional experience with hundreds attending his wake and funeral in Killeigh.

Apart from Shane Lowry, Donal's son Sean Beatty raised the most money, collecing €5,350. Clodiagh Gaels had a number of other walkers participating and they raised around €10,500 in all – Katherine Buckley was their second highest with €1,635.

There was a great turnout in Killeigh for the walk on Saturday morning with Sean Beatty and his mother Arlene leading the walkers out.

Some clubs made a huge effort and there were a few individuals who really pushed the boat out. Part of the appeal of the fundraiser is that you can see the amount donated for each walker on the Grand Canal Walk website, as well as the people who donated money to them.

This introduced an element of competition into it with Offaly GAA vice chairman James Murphy collecting €5,310 for them and Rhode. A great Coolderry mother and daughter team, Maureen and Mary Hanley also went very well, raising €4,100.

Belmont also made a big push with three members clearing €2,000. Former Offaly hurler, Colin Egan led the way with €3,100 while Patrick Kenny raised €2,685 and Joe Turley got €2,505. Carrig-Riverstown had five members with over €1,000 collected.

Offaly GAA chairman Michael Duignan collected €1,780, mainly in the last week while his 1990s Offaly hurling team mate John Troy raised €1,670 for Lusmagh and the board.