Ballinamere show buckets of character to get huge win against Coolderry

Fennelly watches Ballinamere come of age as they reach quarter-finals 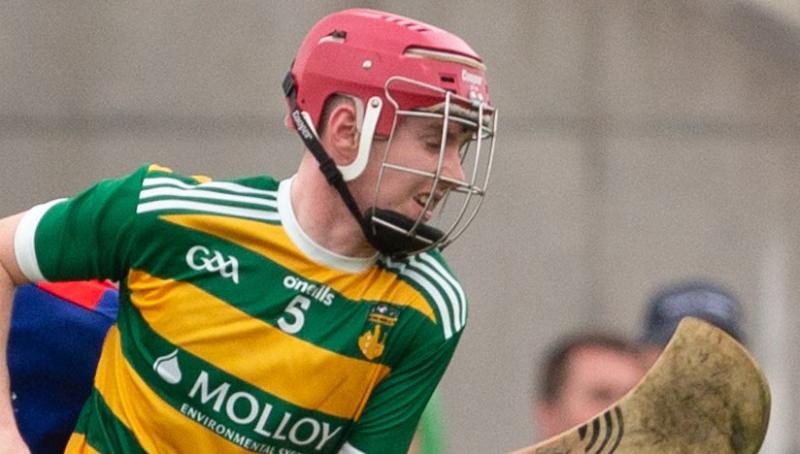 Sam Bourke had a fine game for Ballinamere.

BALLINAMERE showed oceans of character as they recorded a hugely important, season defining win over Coolderry in the Senior Hurling Championship at Birr on Saturday evening.

Ballinamere had to fight with every fibre of their being for the result and just barely got there in the wind up. It was an absolutely compelling game of hurling, one that commanded attention from the throw in to the final whistle.

There was of course some scrappy hurling, poor misses and suspect stick work but there was also oceans of fine hurling, quality scores and a real ferocity and hunger by both sides.

It was a huge win for Ballnamere and with five points from three games, they are now in the quarter-finals. It also places huge pressure on Coolderry who have lost their opening two games and are now staring an early exit in the face and need results to fall their way to survive.

The stakes were massive for both sides. With a number of the Offaly senior hurling side on board – last year's manager Michael Fennelly was watching on, which suggests that he may be about to return for another year -, Ballinamere needed to make their mark and take a big scalp. This was their biggest win since returning to senior hurling a few years ago and if they beat Belmont in their last game, they could find themselves in a semi-final.

It was not easy as a fiercely motivated Coolderry side threw the kitchen sink at them in the second half. Coolderry knew exactly what was at stake here and you had to admire the way they fought. They almost pulled it off and the game ended with a bit of controversy as Eoghan Parlon had the ball in his hand about 21 metres out and was about to put the boot down and go for goal when referee Richie Fitzsimons blew the final whistle – over three minutes of time had been added on at this stage and that was probably more than what should have been played so it may have been the correct decision but it was still a big call.

Ballinamere played with a strong wind in the first half and were fortunate that they got the last six points of the half to lead by 0-16 to 1-8 at half time. Without that run of scores, they would have beaten and would have found it hard when Coolderry found their game in the second half. As it was it gave Ballinamere enough of a cushion but just about.

The second half provided outstanding entertainment. It was fiercely fought and you were almost afraid to blink for fear of missing something.

Coolderry began to ask questions from the throw in as the wind died down a bit but Ballinamere kept the score board ticking over and their noses in front for a long time. They led by 0-19 to 1-10 after forty minutes, 0-20 to 1-11 after 44 minutes before Coolderry began to make real inroads.

Brian Carroll (free) and Kevin Brady got the gap back to four while Ballinamere keeper Mark Troy made a fantastic 49th minute save to deny Kevin Connolly a goal.

When Ballinamere's need was at its most acute, Brian Duignan stepped up to the mark, showing tremendous leadership. He got two super points to put Ballinamere 0-22 to 1-14 clear but Coolderry got back into it with a fantastic 50th minute goal from Brian Carroll – the Ballinamere defence failed to clear their lines and Carroll's finish was out of the top drawer.

Duignan replied with a free but Coolderry were back on terms by the 56th minute after three without reply from Brian Carroll (free) and Kevin Connolly (two), 2-17 to 0-23. With the wind on their backs, the smart money was on Coolderry but somehow, Ballinamere found another gear. Brian Duignan floated over a beaut and then after Brian Carroll uncharacteristically dropped a “65” short, he converted a 60th minute free to give them a two point lead. Brian Carroll cut it to the mimimum with a free two minutes into injury time but a lovely point from the outstanding Dan Bourke moments later was enough for Ballinamere.

As a unit, Ballinamere worked their socks off while they had heroes all over the field with Chris McDonald, Sam Bourke, Ciaran Burke, Dan Bourke, Brian Duignan, Joe Maher and Kevin McDermott having outstanding games.

The wind picked up to close to a gale before the throw in and Ballinamere struggled to make it count for long periods. However, their shooting improved drastically in the eight minutes plus injury time coming up to half time as they got six points without reply for a 0-16 to 1-8 half time lead.

It was doubtful if it would be enough but without that run of scores Ballinamere would have been in real trouble. They were the better side early on with Joe Maher (2), Kevin McDermott (2) and John Murphy all finding the range as they led by 0-5 to 0-1 after six minutes. They also had a few bad wides as they led by 0-7 to 0-2 after fourteen minutes and then 0-8 to 0-3.

They then lost their way badly for a few minutes. Stephen Corcoran was crucial to Coolderry in this period, generally able to find Eoghan Parlon from puckouts and it took Ballinamere a while to react to this – funny enough Corcoran's puckouts were not as influential in the second half when he went too long with a handful of them, including a couple that went wide. Coolderry played very well for a ten minute spell with David Tooher getting in for a 19th minute goal with the very lively Kevin Connolly feeding him to level it up at 1-5 to 0-8.

Coolderry got three in a row through Eoin Ryan, David Tooher and Gearoid McCormack to lead by 1-8 to 0-9 after 21 minutes and it was looking bad for Ballinamere. However, they regained their composure and form coming up to half time. The points began to fly over with Sam Bourke, who made a big impact when moved to centre back on Brian Carroll firing over two super scores. That 0-16 to 1-8 half time lead changed the complexion of the game for Ballinamere and gave them a fighting chance.

Brian Duignan (Ballinamere): The fact that most of the man of the match contenders wore the Ballinamere jersey suggests that the result was a just one. Kevin Connolly was Coolderry's main contender while Eoghan Parlon's first half physicality kept them in it. Dan Bourke, Joe Maher and Brian Duignan all staked serious stakes for Ballinamere. Maher got six points from play but the choice is Brian Duignan. He got eleven points with four from play. That was a pivotal return but there was a lot more to his game here as he really stood up in the closing quarter when Ballinamere were crying out for leaders.

Richie Fitzsimons ended up a central figure. Coolderry won't be happy at him blowing up with Eoghan Parlon in possession right at the end though Ballinamere would have been furious if they had lost out to a goal with almost four minutes of injury time up. Four minutes injury time was too much. Fitzsimons was very fair and he was consistent, especially with applying advantage. There were a couple of soft frees given but both sides benefitted and these things balanced out overall: Sam Bourke was harshly penalised for overcarrying for a free that cut the gap to one in injury time but Cathal Burke were entitled to a free in moments later – it would probably have been pointed by Carroll for the equaliser.

Mark Troy's 50th minute save from Kevin Connolly was absolutely crucial. Troy encountered a few problems with the accuracy of his puckouts but this save more than earned his keep and Ballinamere would probably have been beaten without it.

The St Brendan's Park pitch was in great order and the Birr club hosted the double bill with complete professionalism, and plenty of stewards on hand.

Coolderry's second defeat and the fact that last year's beaten finalists are now staring an early exit in the face.

Two big games as Coolderry meet Shinrone and Ballinamere face off against Belmont in round 4.