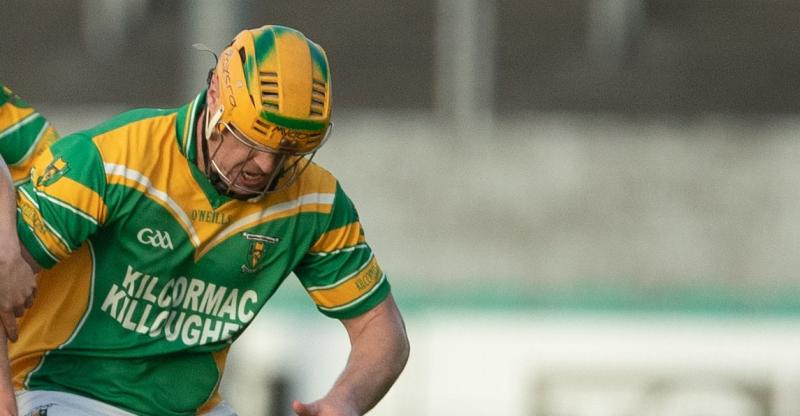 Cillian Kiely, on song for K-K.

WITHOUT hitting top gear yet, Kilcormac-Killoughey have qualified for the quarter-finals of the Offaly Senior Hurling Championship and their early season form won't be costing them one wink of sleep.

K-K have blown hot and cold in their three games but the bottom line has been wins over Birr, Clodiagh Gaels and now Kinnitty, who they were just too strong for in Tullamore on Friday evening.

It was a flawed display with a few misses and spells when they were not sharp but it was still arguably their best performance of the season to date – though Kinnitty were far from the toughest opposition they will encounter. While Kinnitty battled with everything they had and were very competitive for much of the first half, an upset was never truly on the cards here.

K-K had finished well in the first half to lead by 0-14 to 1-9 and the outcome had an air of inevitability about it from here. They have a break now before they face St Rynagh's in the final round and K-K are exactly where they want to be.

Kinnitty to their credit refused to surrender as K-K didn't put them away and they were still alive and kicking inside the last ten minutes as they got the gap back to three points. K-K, however, were able to pick off points whenever questions were asked and they got across the line with a bit to spare.

Overall, it was a decent enough display. It wasn't brilliant, they weren't world beaters and the other Sean Robbins Cup contenders won't be quaking with fear but they will get better. K-K can now do serious training, improve their fitness levels and most importantly, their sharpness and stickwork which has been a bit deficient to date.

They welcomed back the Geraghty twins, Peter and Thomas here. Both came on in the second half and while they need match practice and sharpening up after their absence, they will make K-K much stronger, increasing their options in the attack.

This was a competent, professional performance by K-K. 26 points was good scoring and they always looked like they would have enough to win here. K-K had fine individual performances all over the field. Conor Slevin made a couple of fine saves in goals while Enda Grogan, Jordan Quinn, Jack Screeney, Cllian Kiely, Colin Spain, Lochlann Kavanagh, Conor Mahon and Alex Kavanagh really impressed for them.

With a win under their belt against Clodiagh Gaels, Kinnitty are on course to avoid the relegation battle. With games to come against St Rynagh's and Birr, their chances of a quarter-final place are slim but staying up was always their primary aim this season. They were very honest in the way they went about their business, the way they competed but they were always swimming against the tide.

They got 1-17 but their attack was never able to threaten frequently enough in open play. Nine of their points came from placed balls and it took the introduction of Odhran Kealey at half time for them to have a real scoring threat in play. Kealey got three points whle Aodan Kealey got two from play. Paddy Rigney, James Hardiman, Danny Flanagan and Conor Hardiman had very good spells for Kinnitty, who were always chasing this one.

Once again, Kilcormac-Killoughey started off sluggishly. They weren't clinical in their play and shooting for twenty minutes as Kinnitty fought hard and were very competitive. However, the favourites improved as the half wore on and by half time they were in the driving seat with a 0-14 to 1-6 lead.

The standout statistic from the first half was that all six starting forwards and two midfielders scored from play for the winners. That was a great spread of score and their first half tally could have been higher as they had six first half wides as well as dropping another handful of balls short.

K-K led by 0-4 to 0-1 after nine minutes without doing a whole lot but Kinnitty got right back into it with a ninth minute goal against the run of play from James Dempsey. Kinnitty were very much in it for the next while. They were on level terms, 1-3 to 0-6 after eighteen minutes and trailed by a point, 0-9 to 1-5 in the 25th minute.

K-K, however, were much better and more efficient late on in the half as they outscored Kinnitty by five points to one to take a fairly imposing five point half time lead.

Kinnitty tried hard to get back into it in the second half and got the deficit back to three points on three different occasions. They were two points behind once, 1-10 to 0-15 after 36 minutes but even then, you never really got excited about an upset. K-K got five of the next six points to ull 0-20 to 1-11 clear but they then lost their way as Kinnitty rallied again.

Points from Odhran Kealey, James Dempsey (free) and James Hardiman brought it back to three points, 1-14 to 0-20 with nine minutes left but K-K responded very well to the pressure. They got the next three in a row and were able to cruise home from here.

Cillian Kiely (Kilcormac-Killoughey): Cillian Kiely was the most influential player on the field, and by a distance. He got three excellent points from play when K-K were not at their best in the first half, got further scores in the second half and mopped up a lot of ball in the midfield area.

Adam Kinahan was a good, efficient referee. He didn't give soft frees but he blew the whistle when necessary and was not a factor here. He also showed cards when needed and both sides knew where the line was.

There was no really big moment as such but Alex Kavanagh's excellent 53rd minute point was an important score for K-K. Kinnitty had the gap back to three at that stage and Kavanagh's point gave K-K breathing space.

O'Connor Park was in fantastic condition.

Kinnitty play St Rynagh's while K/K have a bye in the next round.