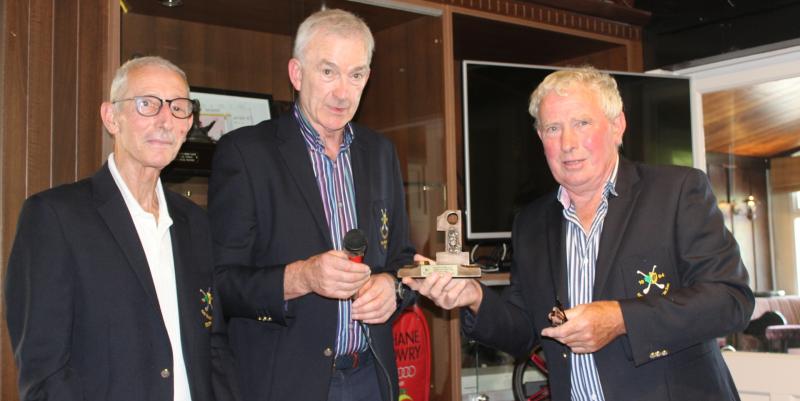 HE didn't quite jump around the place like he did after his famous goal in the 1981 All-Ireland senior hurling final, possibly because he is now in his 70s but Johnny Flaherty still celebrated in his usual imitable style when he recorded a hole in one at Esker Hills Golf Club last week.

No stranger to setting records during a sensational hurling career, Flaherty made history as it was the first ever hole in one recorded at a par four at Esker Hills Golf Club – the home club of golf superstar Shane Lowry.

Flaherty struck his ace in his own president's prize of the All-Ireland Hurlers' Golf Society at the Offaly course last Friday.

He got it at the par four second hole – a comparatively short par four, measuring 320 yards off the forward tees, 354 off the back. Flaherty took the “Tiger line” going out over the trees to the left and hitting the green. The Kinnitty man knew he had hit a good shot when his drive flew off but was still amazed to discover it had went into the hole.

Former Wexford hurlers Dan and John Quigley were actually on the second green when Flaherty's missile landed and they got out of the way as it rolled all the way into the hole.

Flaherty is president of the All-Ireland Hurlers' Golf Society and he decided to hold his prize in Esker Hills this year. The Society is a very active one, including famous former hurlers from all over the country as well as a handful of current ones. They hold a few outings each year and the highlights are the captain's and president's prizes.

Another member of the 1981 All-Ireland senior hurling champions, Tom Donohue is the captain this year and he held his prize in Tullamore Golf Club a few weeks ago. Donohue won an All-Ireland U-21 hurling medal with his native Galway in 1972 before transferring to Ballinamere after moving to Tullamore and then joining the Offaly squad. A tough, tight corner back, he was in Esker Hills Golf Club on Friday.

Flaherty was part of a star studded fourball on Friday. He was outstanding as Offaly won the Leinster and All-Ireland Senior Hurling Championships for the first time in 1980 and 1981. A brilliantly skilful, intuitive and imaginative corner forward, his late handpassed goal in the 1981 All-Ireland final win over Galway was pivotal to Offaly's breakthrough win and is part of folklore in the county.

He was an All-Star in 1981. Flaherty was in the winter of his career at that stage and he would have gone over the century of county appearances only for being out of the country for much of the 1970s. He didn't play at all for Offaly from 1975 to 1978 and his return from abroad was a big factor in Offaly's emergence at the turn of the decade.

He was brilliant during a golden era for Kinnitty GAA Club and their emergence along with St Rynagh's were hugely important to the Offaly hurling success story. Kinnitty came out of junior ranks to become one of Offaly's great forces. Flaherty was still in his teens but already showing promise as Kinnitty lost to the newly formed St Carthage's in the 1965 Junior Hurling Championship final – St Carthage's had just been formed as the various clubs in Rahan parish, Rahan, Blackwood Rovers, Mucklagh and the Island came together under the one banner. Even at that stage, Flaherty's reputation was soaring beyond Kinnitty borders and St Carthage's made sure he was tightly marked in that final.

A year later, however, Flaherty and Kinnitty could not be stopped as they won the Junior Hurling Championship in 1966. There was no intermediate at that time and amazingly, within another year, Kinnitty were senior hurling champions for the fourth time – they had won titles in 1920, 1923 and 1930 while another club in the parish, Cadamstown were successful in 1900 and 1902.

Kinnitty, however, came good again at the end of the 1970s and they had their real golden era into the mid 1980s. They won the Sean Robbins Cup in 1978, 1979 and three in a row from 1983 to 1985. They were very close to annexing a Leinster club title and they made a huge contribution to Offaly hurling in those years. Flaherty was outstanding for them as were county stars, Ger Coughlan, Pat Delaney and Mark Corrigan. Paddy Corrigan had emerged by the mid 1980s, winning an All-Ireland senior hurling medal in 1985 alongside older brother Mark, Coughlan and Delaney, who had all been outstanding in 1981. Kinnitty and St Rynagh's were really at the epi-centre of the Offaly success story in the 1980s. 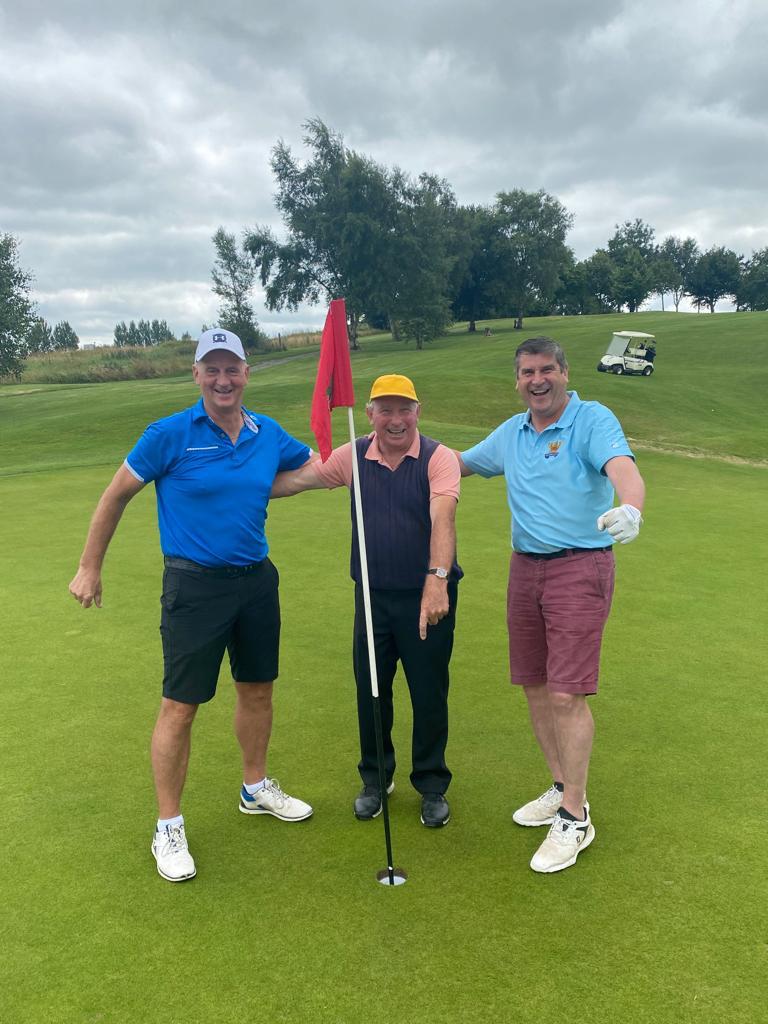 Pictured: Johnny Flaherty, centre, with his playing partners Joe Dooley and Michael Duignan after his hole in one at the par four second in Esker Hills Golf Club last week.

Flaherty has been a keen, capable golfer for several years. A member of Tullamore Golf Club, he is a noted long hitter of the ball – he has represented Tullamore Golf Club on teams in various inter-club competitions over the years. Now playing off 11, he was previously off single figures and only occasional problems with his putter has kept him out of the winners' enclosure more frequently. The Tullamore business man regularly practices as well as plays and has a great passion for golf.

His playing parters have also made huge contributions to Offaly hurling. Joe Dooley won All-Ireland senior hurling medals in 1985, 1994 and 1998 while Michael Duignan was there in 1994 and 1998. Both Dooley and Duignan won All-Star awards in 1998 as they played superb hurling that year. Michael Duignan is now in his third year as Offaly GAA chairman and is a huge factor in revitalising fortunes in the county. Brian Duignan is one of the new group of Offaly hurlers who are trying so hard to bring the county out of the doldrums – he won Christy Ring Cup and National Hurling League Division 2 medals in 2021.

The second hole is a very attractive one in Esker Hills. It is a real risk and reward hole – it always tempts the big hitters to go for the green but there is plenty of trouble on the left, with out of bounds, and accuracy is key. The big hitters will go straight over the trees on the left, the higher handicap golfers will go straight down the fairway, attempting to go over the brow of the hill. If you can do that, there is a short iron in and it is a hole that most golfers can hit in regulation – the vast green is hit off the tee about once every two weeks.

Esker Hills Golf Club has been a great addition to the Offaly golfing scene since opening in 1996. It was designed by the late Christy O'Connor junior on land owned by the Molloy and O'Brien families. It is a unique course, built on the Eiscir Riada with hilly terrain and a great variety of holes. It provides a unique challenge and it has achieved international fame because of Shane Lowry's achievements – the Clara man developed his game there as a young teen. 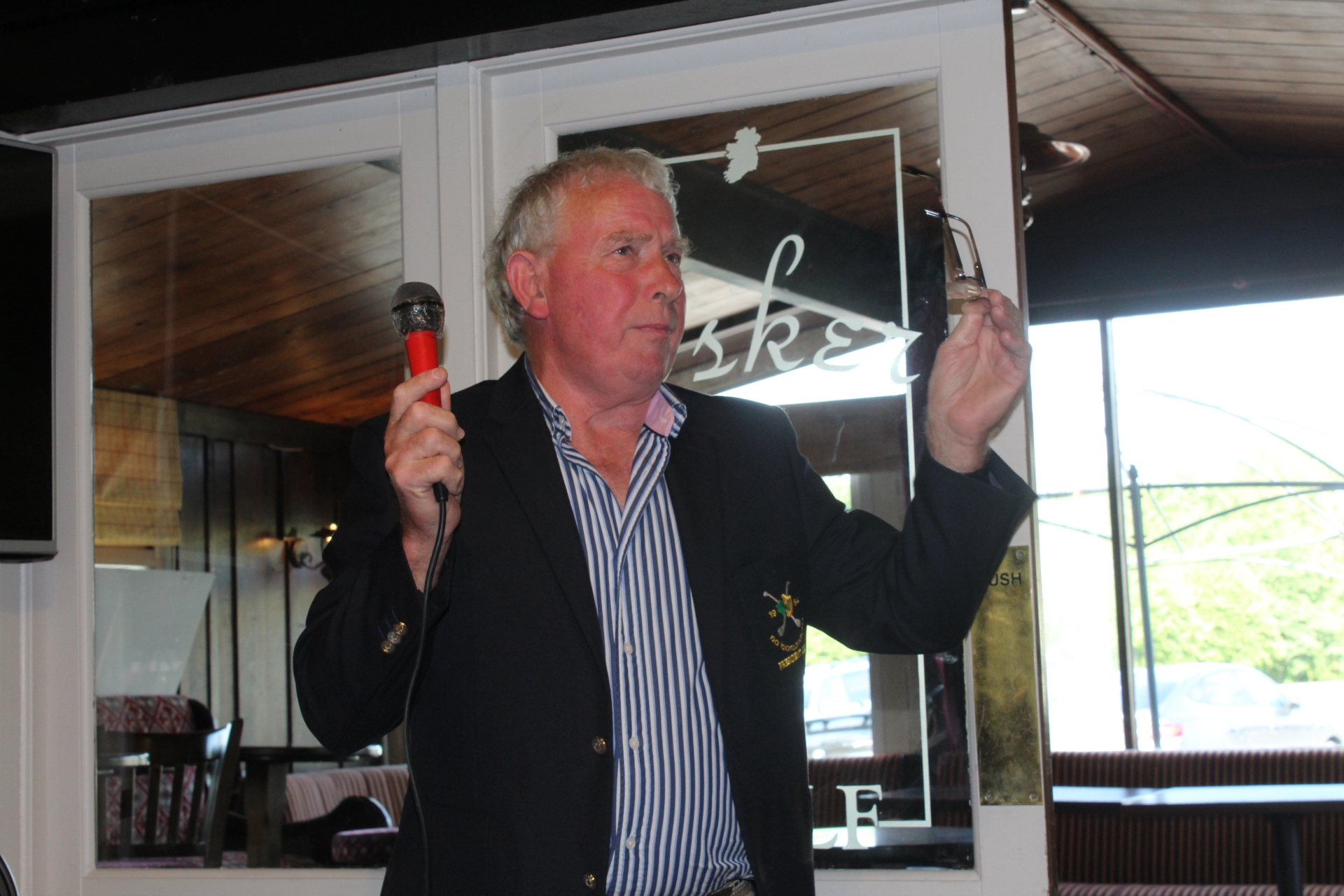 Pictured: Johnny Flaherty describing his hole in one at the prize giving ceremony in Esker Hills. 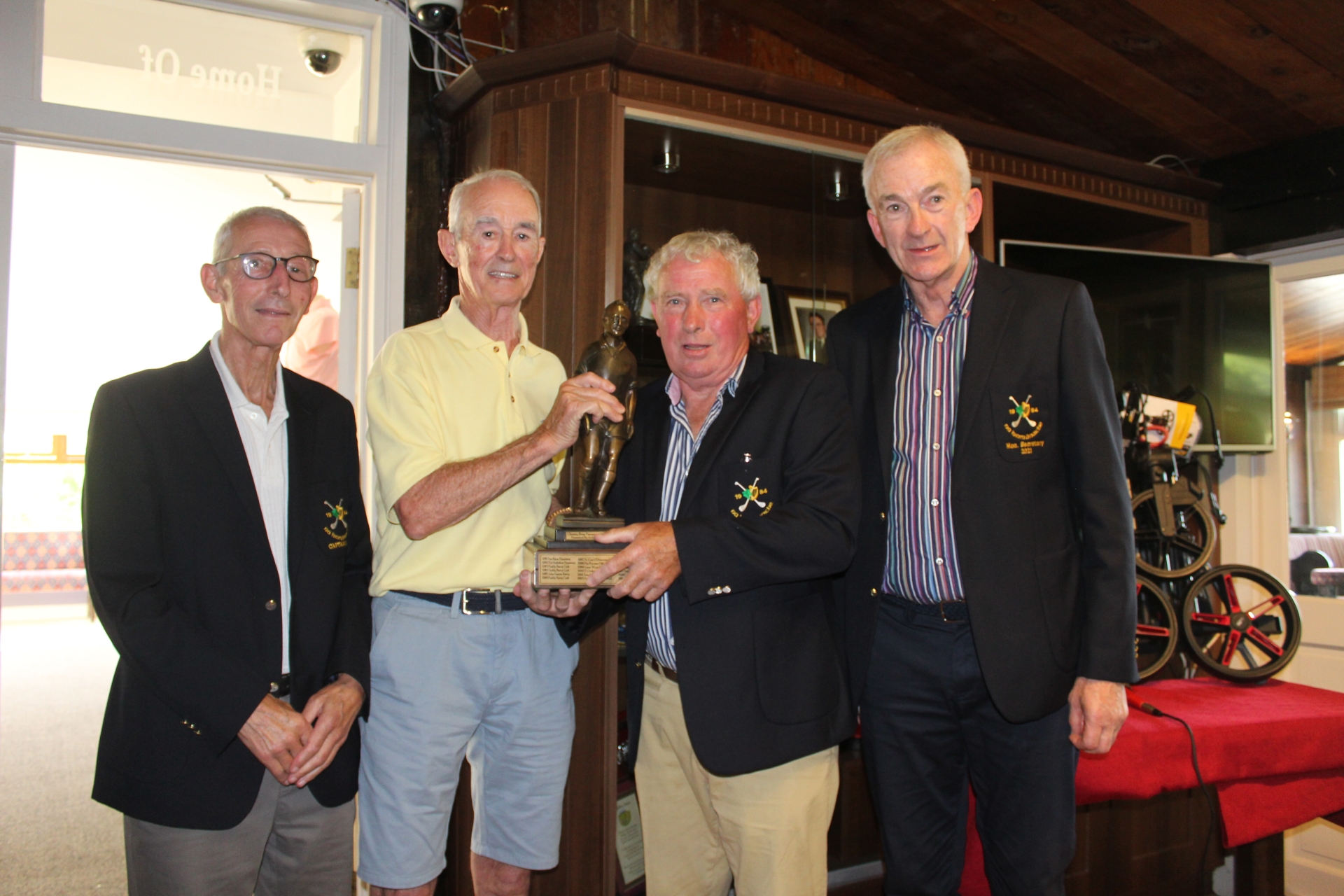 Pictured: Former Tipperary goalkeeper, John O'Donoghue (second from left) accepts the president's prize from Johnny Flaherty after the All-Ireland Hurlers Golf Society outing in Esker Hills last week. On the left is captain, Tom Donoghue and on the right is the secretary, Donie Collins, Cork.