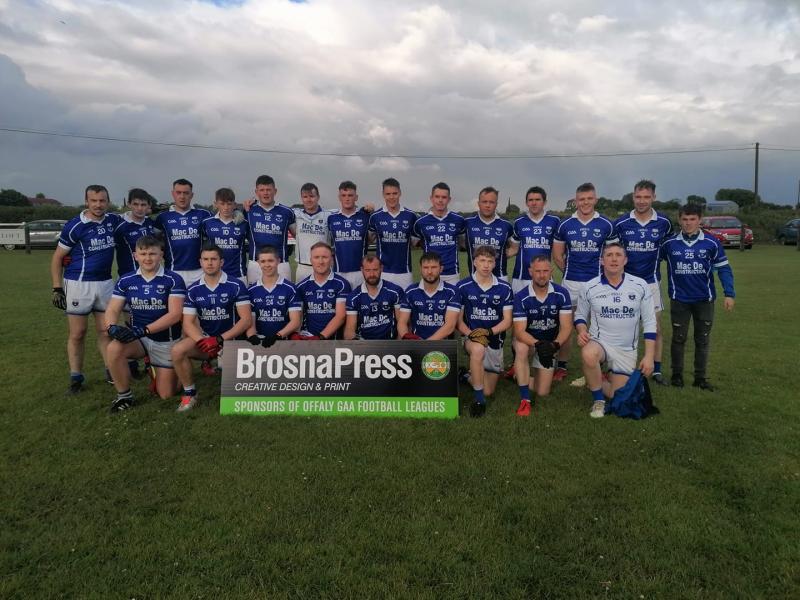 BALLYCOMMON had to dig deep to get the better of their parish neighbours Daingean in a no quarter asked or given Division 3 Football League final in Cappincur on Friday evening.

It was a fully deserved win for Ballycommon, though they had to work very hard for it and it was not as convincing as the final score line might suggest.

Ballycommon were leading by just three points, 3-7 to 1-10 in injury time and the door was very much open for Daingean but they got in for a late 1-1. The point came from a Tom Mealiffe “45” after Shane Lowery had a great goal chance deflected out for a “45” and then impressive sub Adrian Mann sealed it with a well taken goal in the 62nd minute after a good build up involving Sean Conway and Stephen Conneely.

On a dirty evening with regular rain making conditions very tricky, Ballycommon's ability to score goals told the tale. They struck for two in the opening five minutes and these meant that Daingean were chasing their tail the whole evening. The first came from Christopher Kenny after just 30 seconds, set up by Conor Dunne and then Stephen Conneely rattled home the second in the fifth minute after a very good move.

Daingean did well to recover from this and they were the better side for most of the remainder of the half. The Hayes, Jamie and Charlie caused fiere problems for the Daingean defence and began to score freely as Daingean hauled themselves back into it. They were 0-4 to 0-2 down after fifteen minutes and were right back in the game by half time. Charlie Hayes tapped over a free and thet set up Jamie Hayes for a super goal with a pinpoint pass from a free in the 27th minute. A Sean Conway free left Ballycommon ahead by 2-5 to 1-5 at half time but with loads of work to do.

By this stage, Daingean also had their most dangerous forward, Shane Tierney on the field, brought on just before half time and they hoped he would be a match winner. Instead Ballycommon took immediate action to nullify his threat. They moved county player David Dempsey back from midfield to corner back and he did exactly what they needed by keeping Tierney off the ball and on the rare occasions when he got it into hand, ensuring that he couldn't get shots off.

Dempsey was not Ballycommon's best player on the day but he is their most important player. He had started off very well before losing his way a bit but he showed his value to them back in defence – concentrating on his primary man marking duties. Moving him back was an obvious switch but it worked and as the conditions worsened and mistakes increased for both sides, Daingean never looked like getting in for the second goal that they needed.

They also suffered the body blow of another early goal. After Stephen Joyce had made it a two point game, Sean Conway punched a goal after a Stephen Conneely pass to make it 3-5 to 1-6. Both sides were guilty of some fairly hairy football from here on. Daingean fought hard and got the deficit back to three points twice before Jamie Hayes' free made it a two point game with twelve minutes left.

It looked like Daingean had the momentum as Ballycommon were now living on their wits, some of their players out on their feet. With Conor Dunne gone off injured, their forward line was struggling and it was there for Daingean. However, it was here that Ballycommon's character shone through. They may have been spilling ball and kicking it away but they became increasingly dominant in the closing minutes as Daingean's bolt was shot. Gareth Mann settled them with a very important score three minutes from time and that late goal and a point got them across the line.

Daingean simply couldn't break forward as Ballycommon's important players stood up to be counted. They needed to as fitness was an issue for some of this Ballycommon team and plenty of hard training and right living is needed ahead of their championship renewal in a couple of weeks. On the day, David Dempsey, Barry Bracken, Michael Conneely, Tom Mealiffe, Gareth Mann, Stephen Conneely and Adrian Mann were best for Ballycommon.

Stephen Conneely (Ballycommon): Stephen Conneely put in a serious shift for Ballycommon. His work rate and running was immense. He scored an important 1-1 and got on a huge volume of ball when moved out to midfield after David Dempsey went back on Shane Tierney. He broke tackles and generally found a colleague on a very productive evening.

Ger Keyes had a good game in difficult conditions. He allowed for the conditions and this helped ensure an enjoyable game. There were always going to be harsh frees given and ones missed in these conditions but he was on top of things and was very fair.

Gareth Mann's point three minutes from time was a crucial one. Daingean had it back to two points and had they got the next one, they may have been able to force extra time. Instead, Mann's neatly taken score opened a gap and left the losers needing a goal – Mann was among the players who came good for Ballycommon late on.

Cappincur had plenty of stewards and hosted an enthusiastic crowd very well. Their pitch held up well in bad weather.

This was a good, competitive game but the real business for both sides is in the chamionship in two weeks time.

The championship is next for both.