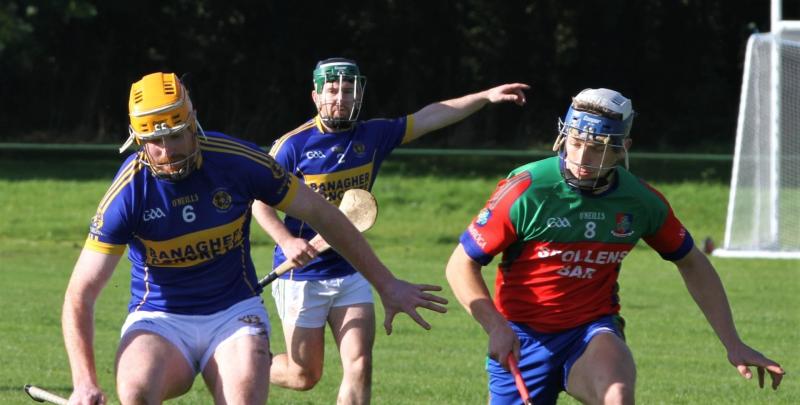 Damien McLoughlin (St. Rynagh’s) is first to the ball ahead of Padraig Cantwell (Shamrocks) in last year's IHC semi-final.

ONCE again the Offaly Intermediate Hurling Championship is wide open with all of the teams having some sort of prospects.

There are certainly no clear starters' favourites. Shamrocks should have that mantle but you just couldn't trust them to make it. They could do it but they have flattered to deceive since going back down three years ago – losing a semi-final and a final.

Former Offaly hurling Daithi Regan recently stepped down as the Shamrocks manager, complaining on an Off The Ball broadcast that their dual players were being over trained by their footballers. Birr man Regan lives in Mucklagh and even without this disruption there would still be doubts about their ability to win this championship.

Football is the priority in Shamrocks and making progress in the Senior Football Championship is the club's big ambition this year – the club also possesses a very loyal, passionate hurling fraternity and they are hungry to get back up to senior “B” level.

Yet Shamrocks remain very serious contenders. They will be as good as anyone else in the championship, they have a strong back bone and they will be hard to beat.

It should be a very good championship and the fact that so many teams have prospects adds to its attraction. It has eight teams, in two groups and the format gives teams plenty of margin for error. The top team in each group goes into the semi-final and the next two criss cross in two quarter-finals. The bottom two teams meet in a relegation play off.

Shinrone, St Rynagh's, Belmont, Coolderry and Seir Kieran all have teams in senior hurling and you don't know what you will get from any of these. Shinrone won it a couple of years ago and went straight back down last year. St Rynagh's have been the dominant force in the Senior Hurling Championship in recent years and their second team should be very strong. They won't be far away. Coolderry's second team should be reasonably strong while Belmont and Seir Kieran really shouldn't be strong enough to win at this level, though you never know, and Shinrone did get to the final two years ago.

Group 1 consists of Shinrone, St Rynagh's, Belmont an Coolderry while Shamrocks, Carrig and Riverstown, Seir Kieran and Brosna Gaels are in group 2.

Brosna Gaels' presence is interesting. They are an amalgamation of players from football clubs, Ballycumber, Doon, Erin Rovers and Tubber and they won't be bad at all. Most of their team play football and that means that hurling can suffer but they have some really good hurlers. They competed in senior a few years ago before falling down the ladder but they won junior last year. It is hard to know with them at the moment but they could get good.

Simlarly, it is hard to know what to expect with Carrig and Riverstown. It is their first team and they have no football complications. You would expect them to be there or there abouts and they were pipped by Birr in a thrilling semi-final last year. They have a very good chance.

You never know what way teams can progress at this grade with young players emerging. Teams can have wild fluctuations from one year to the next - for example, Coolderry were beaten in the 2020 final and had to survive a relegation play off last year. At the moment, however, Shamrocks, St Rynagh's and Carrig-Riverstown look to be out ahead of the others while Brosna Gaels could mount a challenge. It will take a few weeks before trends emerge.

See Offalylive for profiles of each team.