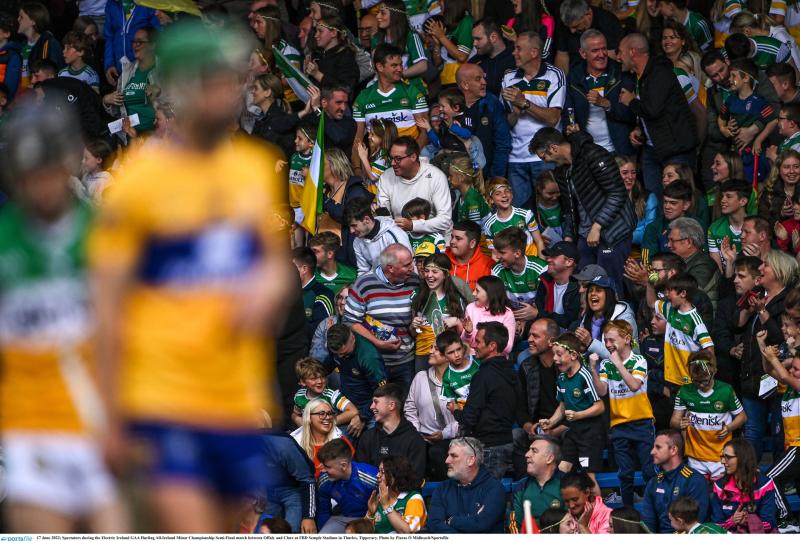 OFFALY will play a mouth watering derby against Tipperary in the All-Ireland Minor Hurling Championship final on July 2.

Tipp defeated Galway by 3-24 to 3-20 in a superb tussle on Sunday afternoon and it sets up a pairing that should attract a crowd in the region of 20,000 people. Munster champions Tipp will be favourites for the final but many Offaly people will be happier to be playing them on the basis that Tipp only beat Clare on penalties in the Munster final while Galway destroyed them in the round robin section to determine two All-Ireland semi-finals.

There will be huge interest in Offaly as they compete in their first All-Ireland minor hurling final since 1989 and their first hurling decider since the 2000 senior defeat by Kilkenny. The performances of this young team have captured the imagination of GAA supporters in Offaly while the county's lack of success over the past two decades has ignited a powerful flame in people.

Offaly captured the All-Ireland U-20 football title in sensational style last year and reaching an All-Ireland final in hurling a year later has given a tremendous lift to people.

It will be the third All-Ireland final between Offaly and Tipperary. Offaly won the 1987 minor final while Tipp turned the tables in the U-21 in 1989 at a throbbing Portlaoise.

There will now be plenty of speculation about the venue for the final. While people would like to see it in Croke Park, it is GAA policy that minor finals now be standalone fixtures – though this not a strict rule and there may be some room for leeway.

Speaking after Offaly's superb win over Clare on Friday evening, manager Leo O'Connor said Offaly will play it wherever authorities want. Asked were authorities right to change the minor being a curtain raiser to senior on All-Ireland final day, he said: “I don't think so to be honest. When minor hurling was U-18, there were still U-17s and U-16s playing. There was no rule at the time. When I grew up, we grew up with traditions where the All-Ireland minor hurling final was played with the All-Ireland senior hurling final. The minor went out As Gaelige. They are traditions. I don't see anything that was wrong with that but it is the way it is. Offaly are in an All-Ireland minor final, we will take it anywhere. We will play it at half eight in the morning if they want it on a Wednesday morning. It is progress for the county, it is massive and we will take it whatever way it comes and what goes with it. They are a very level headed bunch of lads and it is work rate and what they do for the county.”

While Portlaoise would be an obvious venue for Offaly and Tipperary, if it isn't in Croke Park, authorities will have to carefully consider the possible crowd that will be there. With their seniors going poorly this year, there will be huge interest in Tipperary in this final while authorities could be surprised by the amount of people in Offaly who will attend.

There was over 20,000 at the All-Ireland U-20 football final between Offaly and Roscommon last year. It is difficult to know if the minor hurling would attract that but if it did, that would be touching O'Moore Park's capacity. Gaelic Grounds in Limerick or Nowlan Park in Kilkenny would have to be considered then but that is all speculation at the moment and an announcement will be made early this week.