Carrig & Riverstown battle back against Tullamore to claim league title 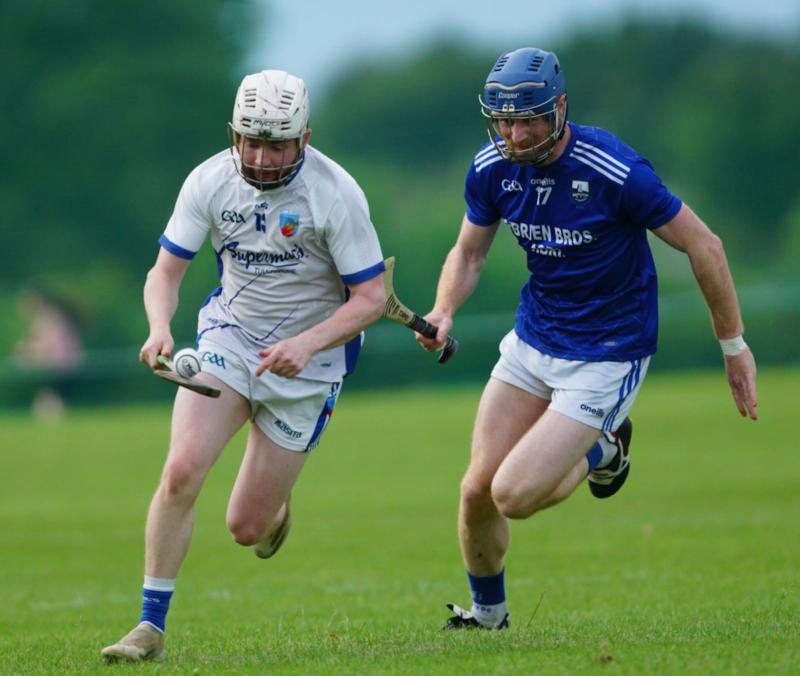 CARRIG & Riverstown put in a strong second half performance to overturn an interval deficit and claim the Division 4 Hurling League title with a two point win over Tullamore after a very entertaining final played in Kilcormac on Thursday evening.

There was little to separate the sides throughout the game and they were level on eight separate occasions over the hour. The result was in doubt until the final whistle as Tullamore lobbed a free into the goalmouth in the hopes of snatching a winning goal but the Carrig & Riverstown defence cleared the danger and victory was theirs.

Over the hour Carrig & Riverstown did have the edge and had they taken all their chances they could have won by a bigger margin but those misses ensured that Tullamore hung in there to the finish and they could have snatched victory at the death.

The sides matched each other point for point in the first 20 minutes but Tullamore then enjoyed their best spell as five points without reply in a six minute spell pushed them five clear but a couple of late Carrig & Riverstown points cut the deficit to three at the break, 0-10 to 0-7.

Tullamore had extended their lead by one when Carrig & Riverstown struck for two goals in two minutes to put them back in front. Tullamore replied with a goal of their own and again the sides exchanged points and the lead and they remained deadlocked with five minutes left on the clock. Carrig & Riverstown finished the stronger with two late points to seal the win.

Carrig & Riverstown had more of the possession in the second half but they missed a lot of chances. They hit 14 wides over the hour, double the total of their opponents, and they wasted a lot of other opportunities. They spurned a number of goal opportunities, including three in the first four minutes of the second half alone, and also failed to find the target from a number of frees. But their effort and commitment drove them on and when the chips were down they came up with the scores to get them over the line.

Tullamore never gave up and while their best moments came in the first half, they were still very dangerous after the break and only for a fine save from Daniel O'Meara, could have hit the front late in the game. They were the sharper side in the first half when the evergreen Shane Kelly showed the way but he probably lacked sufficient support in the scoring stakes from his colleagues.

Paddy King had a fine game at full back for Carrig & Riverstown with Marc Reedy and Michael Keane also performing well in defence. Shane Collins got on a lot of ball around the middle of the field while in attack John Cashen, Andrew Coakley and Aaron Dolan made most impact.

Dylan Hensey, Ciaran Waters and Kalvin Fenlon worked hard throughout in the Tullamore defence, Brian Hogan played well in the middle of the field while in attack Shane Kelly got best support from Colm Woodlock and Niall McCabe.

Carrig & Riverstown opened the scoring when Andrew Coakley pointed after three minutes and after Shane Kelly had popped over two for Tullamore John Cashen levelled. Carrig & Riverstown should have had a goal when Kieran O'Brien got through but his effort crashed off the crossbar and over the bar. Two Shane Kelly frees restored the Tullamore lead but Aaron Dolan levelled again and Niall McCabe and Aaron Dolan (free) exchanged points to leave it 0-5 each after 20 minutes.

Tullamore then went on a scoring spurt with five points in a row, one each from Paul Kelly and Colm Woodlock and three from Shane Kelly, one from play, one a free and the other a '65' after Daniel O'Meara had saved well from Niall McCabe. Andrew Coakley and a long range free from goalkeeper Daniel O'Meara cut the deficit back to three at the break, 0-10 to 0-7.

Carrig & Riverstown had three goal chances early in the second half but Kieran O'Brien and Peter King had shots blocked while Aaron Dolan was brilliantly hooked as he went to shoot. Five minutes in Shane Kelly did get the first point of the half from a free but Carrig & Riverstown hit back with two quick goals. The first came when Michael Keane's high ball in broke and John Cashen gathered and drilled to the net and less than two minutes later after a bit of a scramble Andrew Coakley gathered at a very tight angle on the left and somehow squeezed his shot into the net.

Tullamore hit back and two minutes later Colm Woodlock raced in from the right and fired a great shot to the net to put his side back in front. Aaron Dolan levelled and after Shane Kelly had put Tullamore back in front again, Dolan pointed two frees to leave Carrig & Riverstown one ahead with nine minutes left.

Tullamore then had another goal chance when Kevin Waters linked up with Colm Woodlock but this time his powerful shot was brilliantly saved by Daniel O'Meara. Shane Kelly did level again from a free but Aaron Dolan pointed another Carrig & Riverstown free and Andrew Coakley added another from play to give his side a two point winning margin. Tullamore were reduced two 14 men on the hour mark when Ronnie Hughes picked up his second yellow in three minutes and his side kept pushing but were unable to salvage the game with a winning goal.

There were a number of contenders on both sides but in the end I give the nod of Carrig & Riverstown centre half forward John Cashen. He scored the crucial first goal for his side but it is more for his hard work and effort to the very end which epitomised the Carrig & Riverstown display. He was constantly in the thick of the action and as well as scoring 1-1, helped set up scores and won frees for his side.

With the game finely balanced with eight minutes left, Kevin Water and Colm Woodlock combined for Tullamore and Woodlock's low powerful shot was brilliantly stopped and cleared by Daniel O'Meara. A goal at that point would have put Carrig & Riverstown two points up and could have been the catalyst to drive them on to victory.

Simon Whelahan managed the game well and there were few contentious issues. He had no option but to issue two yellow cards and a red in quick succession to Tullamore sub Ronnie Hughes late in the game for separate fouls. He did operate without a linesman on one side of the field for the duration of the game.

This proved to be a very good contest with the sides level eight times over the hour. With championship just around the corner, it was ideal preparation for both sides and they can now look to the months ahead with optimism and hopes of doing well in the championship.

This concludes the league for both sides and they can now turn to their attentions to the championships which will be getting underway in the coming weeks.

The Kilcormac pitch was in excellent condition on a lovely Summer's evening and the club controlled parking well and had other arrangements suitably in place for the final.