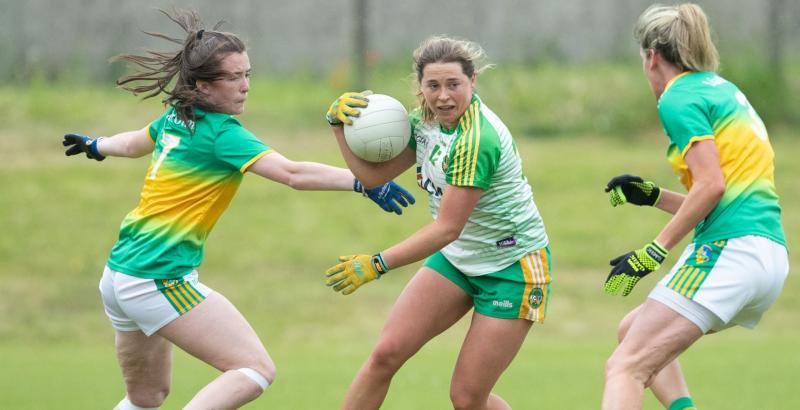 OFFALY ladies footballers got their championship season up and running when they performed very well to beat Leitrim in Clara's Bretland Park last Sunday.

After suffering an agonising defeat against Wexford in their opening game, Offaly really needed to win this one and a very highly motivated and focused team took to the field. They had been unlucky to lose to Wexford in Enniscorthy – staging a terrific recovery to get their noses in front near the end only to have the win snatched from their grasp at the death.

This was a huge, knockout game for Offaly and they now have their fate in their own hands – Wexford are through with two wins out of two and Offaly play Wicklow in a winners' take all showdown in Clara next weekend for the second qualification spot.

Offaly had to show real character to survive here. As in Wexford, they started badly and Leitrim hit them with everything they had early on. The sides had met in the National League Division 4 semi-final earlier in the season and Offaly only advanced after extra time so they knew they were in for a very tough battle.

Leitrim started like a high speed train against the wind, registering three early points before Offaly knew what had hit them. Three of those points came from Michelle Guckian and only a lucky goal kept Offaly ticking when Sarah Keohoe got the ball to the net after a Saorah Doyle shot for a point hit the post.

Leitrim responded very well and Roisin McHugh got an excellent 12th minute goal after a pass from Leah Fox. Leitrim led by 1-5 to 1-0 at the quarter way stage and were very economical, taking every chance they got while Offaly had hit seven wides.

Yet by half time, the entire complexion of the game had changed. Offaly found their feet and began to breach the Leitrim defence with great regularity. Saorah Doyle got a couple of frees and then Mairead Daly showed her vast experience as she sped through the Leitrim defence and equalised with a goal. Michelle Mann gave Offaly the lead for the first time and they went on to lead by 2-9 to 1-5 at half time.

It was an extraordinary turnaround after a shocking start and it very much put Offaly in the driving seat. Leitrim fought with everything they had in the second half. They finally got their sixth point from Guckian a minute into the second half and almost got two quick goals as Eimear Evans denied Roisin McHugh and then Laura O'Dowd.

After Leah Fox added a point for the winners, McHugh blazed wide with another goal chance and Leitrim ultimately paid a very dear price for these misses. As often happens in those cases, the goal came at the other end with Saorah Doyle hitting the net after a Saoirse McGuinness shot was blocked.

That more or less ended it as a contest though Leitrim kept trying. Guckian got two points, one free but Roisin Ennis and Mairead Dalt replied for Offaly and Leitrim's day was summed up in injury time when Guckian was wide with a final goal chance.