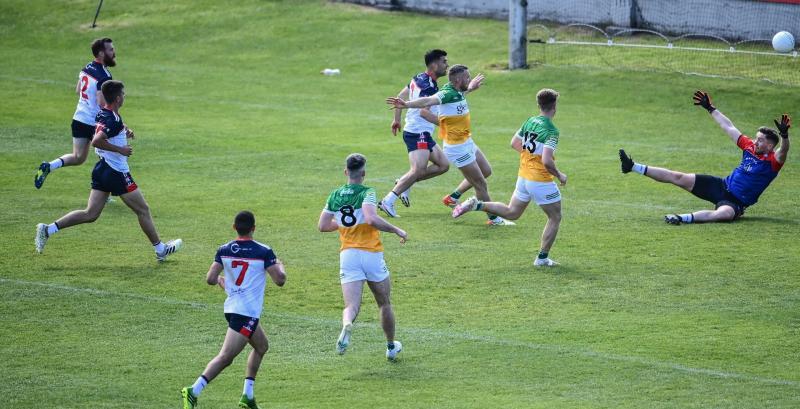 HUNGRY to salvage something from the year, Offaly qualified for the semi-finals of the Tailteann Cup with a very comfortable win over New York in Tullamore on Saturday afternoon.

It was a decent display by Offaly who had their safe passage assured at half time when they led by 2-10 to 0-5. They had played with a strong wind in the first half and it meant there was still a small bit of work to be done but it was still a very significant half time lead and there was to be no way back for the American visitors.

Offaly had left the door open for New York for a good while in the first half but they emphatically closed it with the opening four points of the second half. That gave them a 2-14 to 0-5 lead and while New York fought for their pride from here on, they were in the hunt for nothing else

While there will be much tougher tests ahead, it was a satisfactory win for Offaly and they are clearly focused on doing well. The Tailteann Cup is serving Offaly extremely well and the games are a great bonus. They will now have at least four with an open draw for the semi-finals on Monday and it has to bring the younger players on in particular.

Some of these are clearly growing into themselves as senior county players with Lee Pearson and Keith O'Neill really showing their class and promise. Jack Bryant is also beginning to find a bit of form – outstanding as Offaly won the All-Ireland U-20 football title last year, he missed most of this year with injury. He wasn't fully fit a few weeks ago as the Tailteann Cup campaign started a few weeks ago but management have adopted a policy of giving him plenty of game time and this is paying off. Bryant oozed class here at times, he set up two goals and could have had a couple himself as well as scoring two points.

Cathal Flynn and Morgan Tynan came on early in the second half and Flynn once against showed his promise. The Ferbane man took New York on and showed great footballing intelligence – maybe the time has come to give him a start and it would be wrong to condemn him to the role of an impact sub, not that an impact was required to win here. Tynan also showed some good moments and the games are absolutely crucial for him at this level.

Apart from that, it was a professional and very competent display by Offaly. They did what they had to do as they controlled all facets of play. They killed the game off early and were able to cruise home in the second half. Only New York forward Jack Reilly caused real problems while Adrian Varley posed occasional ones and apart from that, Offaly were on top all over the field – it was a measure of Offaly's dominance that Reilly couldn't get on the ball in the secon half and was replaced ten minutes from time. Lee Pearson and Cian Donoghue were excellent in defence, Jordan Hayes was very effective at midfield and the Offaly attack moved very well. Ruari McNamee was once again superb at centre half forward while Niall McNamee was also very good.

Offaly's win does come with a very obvious caveat. New York were not at the races and were poor. It was not surprising that Offaly would be fitter and faster than them. It had to be that way with New York having little real competition back in the States but their tackling was noticeably deficient and this let them down in the first half in particular.

Offaly laid the ground work for their win with a solid first half display. There were times when they could have attacked at more pace as they played with a strong wind that was blowing straight down towards O'Brien Park. Offaly were 1-7 to 0-5 ahead at the half hour mark and that was a fragile lead with the wind on their backs but at half time, the gap was 2-10 to 0-5 and there was no way New York could salvage that.

It was clear that Offaly were the better team from the start and a punched Keith O'Neill goal in the 10th minute after a Rory Egan ball in gave them a 1-3 to 0-1 lead. They didn't go for the jugular and Jack Reilly had an outstanding first half for the visitors, scoring four points, three from play as they battled hard without ever looking to be good enough to win.

They still hung on in there and were happy to be five points behind after 32 minutes but Offaly opened daylight before the break. Niall Darby got two points, one free, Ruari McNamee floated over a beaut an a 39th minute goal from Anton Sullivan after Jack Bryant sent him in really put them in the driving seat.

Niall McNamee (free), Keith O'Neill Ruari McNamee and Cathal Flynn got four quick fire points after the restart and they knocked the stuffing out of New York. Jack Bryant missed a great goal chance and New York rallied briefly with three points in a row. Offaly got the next 1-2 with the goal coming from Cathal Flynn in the 52nd minute after Jack Bryant sent him in.

That gave Offaly a 3-16 to 0-8 lead as it all dwindled out very harmlessly.

Jack Bryant (Offaly): Several contenders and all wearing the Offaly jersey. Cian Donoghue was the standout in the first half, rampaging up the wing with great pace and intent and driving into dangerous positions. Ruari McNamee distributed superbly from centre forward and is playing some of his best football at this level while Keith O'Neill was superb. My choice is Jack Bryant. It wasn't A flawless performance by the Shamrocks man as he made a couple of errors and coughed up a small bit of ball but there was still something very compelling about the way he played. He got the full game which was great for him, improved as it went on, scored two points, had several assists, should have got two goals and floated into dangerous positions all afternoon, with menace dripping out of him every time he got on the ball.