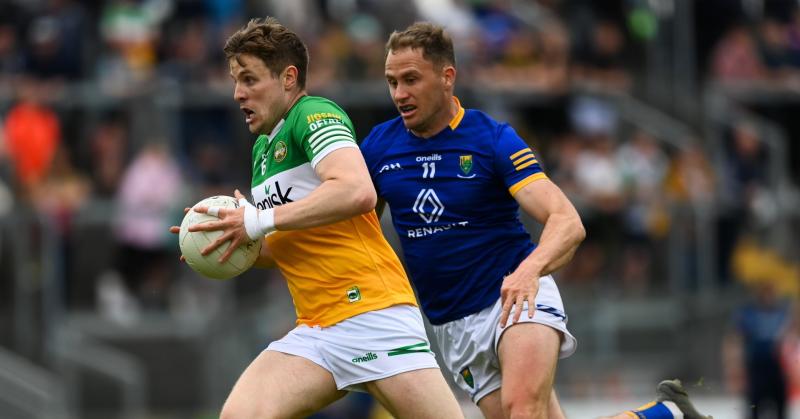 Johnny Moloney, outstanding in the win over Wicklow.

OFFALY senior footballers will be giving New York their very full respect but Monday's draw for the quarter-finals of the Tailteann Cup has still given them a great opportunity of further progress.

The visitors will travel to Tullamore with a decent team and an absolute determination to acquit themselves well but it will still be a big upset if they have to return to Ireland for a semi-final.

While Offaly's football has been far from flawless and supporters would love to see them adapt a more attack orientated game, they have been clearly up for the second tier competition. They have demonstated a good hunger and attitude in their two games to date and they would love to get a semi-final berth in Croke Park.

There will be bitter disappointment in Offaly if they don't achieve that and their form suggests that they should be able to get at least another day.

Offaly lived on their wits in the first round in Wexford and were quite fortunate to escape with a win. They improved considerably against Wicklow last Sunday. They were still defensive at times but they did move forward with pace and they cut down on the volume of errors that blighted their display in Enniscorthy.

There is an opportunity for Offaly in the Tailteann Cup. There is an open draw for the semi-finals and if they beat New York, Offaly could meet anyone of Westmeath/Carlow, Leitrim/Sligo or Fermanagh/Cavan.

It is a big chance for them. It is likely to be John Maughan's last year as manager and it is possibly the last year for some of the county's longest serving players. Niall McNamee, Johnny Moloney and Niall Darby have earned the right to bow out on their own terms and at their choosing but that day is imminent for all three. A Tailteann Cup win would be a great way to end, if they are on the verge of making that decision.

There are tough battles ahead but Offaly have a chance in this competition. They will, however, have to be fully tuned in to get over New York. The Americans have a lot of good players, some with inter-county experience in Ireland, and they will be giving it everything. Offaly, however, should have ample quality to make the semi-finals.