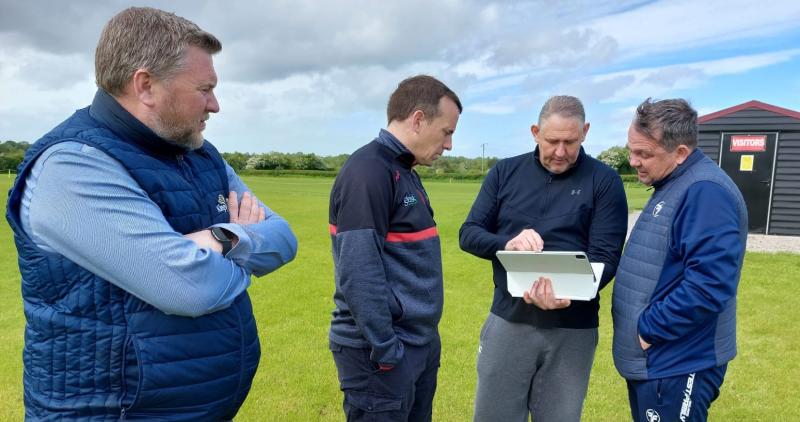 CLARE hurling folk hero, Davy Fitzgerald has urged spectators to turn out and enjoy themselves at a novelty fundraising challenge for the Killeigh Schoolboys and Girls Soccer Club.

The Midlands Fittest Superstars Team Challenge is based on the hugely popular television show that he orchestrated some years ago, Ireland's Fittest Family. It will take place at the Killeigh Club's impressive facilities at Derrybeg, on the main road between Tullamore and Killeigh, on Saturday, May 28 – starting at 10.30am and finishing around 4pm.

He will be present throughout the event on Saturday, refereeing the teams and offering encouragement. A decent level of fitness will be required for the obstacle course but Fitzgerald explained that it lasts for just 10-12 minutes and participants don't need to be super fit.

“You need a decent level of fitness but you are only as strong as your weakest link and you have to be smart in how you do stuff. It is only 10 to 12 minutes of work so it is doable for everyone.”

The challenge will start with hang toughs and box step ups and if certain targets are hit, the teams will get between 30 to 10 seconds off their time for the full course. The course will include a variety of challenges, including a 6 foot to 10 foot wall, monkey bars and bringing tractor tyres through bollards – Fitzgerald said that the tractor tyres is one of the hardest things as participants get their co-ordination mixed up on this.

He hopes there will be close to thirty teams on the day and slots are still available at €300 a team. He also hopes locals will turn out to watch the event, promising a fun filled and entertaining day.

“Life is about having fun and doing things. You might think you are between 30 and 40 and shouldn't be doing this but everybody should be doing it an having a bit of craic,” he remarked.

He generally organises between 3 to 5 of these type events each year, citing insurance costs and his busy schedule for limiting it to this. He promised a warm welcome for everyone who attends Saturday's event.

Since its establishment in 1992, the Killeigh club has grown into one of the largest soccer clubs in the Midlands School Boys/Girls League.

The club continues to develop and attract members at all age groups. It has a vibrant cub’s academy with over 40 members aged from 4 to 6 years.

At underage level it fields teams from under 7 to under 19 across both boys’ and girls’ leagues.

Killeigh now boasts one of the largest girls’ clubs in the Midlands School Boys/Girls league with over 120 registered members.

Illustrating its progress at schoolgirls level, the club recently had four players selected for the U13 FAI Centre of Excellence and had ten players in the Midlands Emerging Talent Squad which beat Kildare 2-1. A number of players are also in the U14 ETP Gaynor Cup squad.

The club is also the only one in Offaly to field a team at schoolgirls u16 level, a team which is unbeaten all season.

The club also fields a senior men's team, and two senior ladies teams, with 500 players registered to play across all levels.
The club has moved to various locations in the Killeigh area since its foundation, but settled at their forever home with the purchase of a 10-acre site in Derrybeg, Co. Offaly.

A state of the art playing and training facility will be developed here to facilitate the club's continued expansion.

This new development is situated 3 km from Tullamore on the N80 Portlaoise Road. It will incorporate facilities such as three new pitches, dressing rooms, a gym, and an all-weather pitch with floodlighting and all ancillary services.

Log on to https://www.killeighfc.com/events for registration and further information.