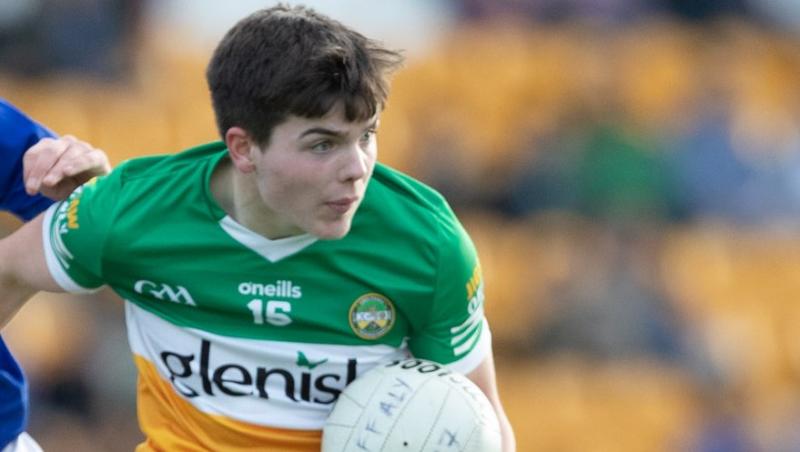 Niall Furlong, one of Offaly's best players in Parnell Park.

A NOTICEABLE difference in power and physicality was the big difference as Dublin ended Offaly's dream of making the Leinster Minor Football Championship final in Parnell Park on Wednesday evening.

Offaly worked terrifically hard, emptying the tank all over the field but it was nowhere near enough as Dublin won comprehensively and had their final place booked well before the final whistle.

It was a strange sort of game with Dublin leading by 1-5 to 0-2 at the break and getting well clear in the second half. It was a brave display by Offaly and there was absolutely no quibble about their work ethic. They simply didn't have the power to break tackles and struggled to get free of their men all evening.

The scoreline was a bit harsh on Offaly in that their performance merited a more respectable scoring tally, yet there was no disputing the merit of Dublin's win. Offaly simply made too many mistakes, kicked too many wides and didn't play well enough to win.

Offaly had three problems in the first half and they combined to leave them with a mountain to climb as they trailed by 1-5 to 0-2 at half time.

Offaly worked their socks of, displaying a tremendous work ethic but it was an energy sapping game and it took a lot out of them. They needed that work rate as they conceded a power advantage to Dublin, struggling to break the tackle and get free once they got decent possession.

The big problem in Offaly in the first half was the concession of a desperately soft sixth minute goal as goalkeeper Sean Kavanagh misjudged a Joe Quigley free and it dropped into the net. It was a complete fluke, it gave Dublin a 1-1 to 0-1 lead and it was always there in the first half.

The initial free was very soft and that was another problem for Offaly in the first half as some soft frees were given against them by referee Andrew Smith. They also got a couple of soft ones later on and it all combined for a very dogged, tight first half.

Another soft free saw Ciaran Donovan point Dublin into a 1-2 to 0-1 lead in the 11th minute. A further seventeen minutes elapsed before the next point, the first from play from Paul Reynolds Hand. Niall Furlong got Offaly's first point since the second minute with a super 30th minute free but two injury time points put Dublin in the driving seat.

Offaly had a great goal chance at the start of the second half with Conor Fox just failing to get on the end of a through ball. They desperately needed that goal to ask serious questions of Dublin but unfortunately the home side were in a comfort zone of sorts all the way home. They got the first three points of the second half to lead by 1-8 to 0-2 after 39 minutes, with Shane Rigney getting a black card for pulling down Nathan Fitgerald for the free that led to that eight point.

There was simply no way Offaly could pull it back from here, though they did well to batten down the hatches when down a man. Luke Kelly got in for an opportunist goal in the 42nd minute and Offaly were still semi-alive, trailing by 1-10 to 1-3 when they went back to fifteen – Robert Carney replaced Rigney at that stage.

However, in the next few minutes they were emphatically put to the sword as Dublin added three points and David Mulqueen got a 60th minute goal to make it 2-13 to 1-3. Niall Furlong got a late consolation goal from a poorly defended free and then had another pile driver deflected over by David Leonard as Offaly finished well – the losers deserved those late scores but they were really only of cosmetic interest.

It brings a topsy turvy year to an end for Offaly with their run away knockout wins over Carlow and Laois the big positives. This performance was not as bad as the bare statistics suggest – just two points and no score from play in the first half and just 2-4 overall with 1-1 coming in injury time.

Their performance could not win this game in a month of Sunday's but their work rate and desire commanded full respect. On the day, Offaly's error count was just too high and their wide count of nine was too high. They gave away too much hard ball and were unlucky on occasions when they brilliantly turned ball over, dispossessing an opponent but too much of this ball ended in Dublin hands.

On the day, Cathal Guinan, Cameron Egan, Padraig McLouglin, Cillian Bourke and Niall Furlong were among Offaly's better players but many of these contributed to the volume of mistakes – Bourke for example got through a mountain of great work at midfield but had a couple of poor wides and kicked a bit of ball away. It was that type of game for Offaly and overall, they were just not good enough on the day.

Dylan Clark (Dublin): Dylan Clark had a powerful game at midfield for Dublin. He won a lot of ball and used a lot of it very well in addition to scoring two points.