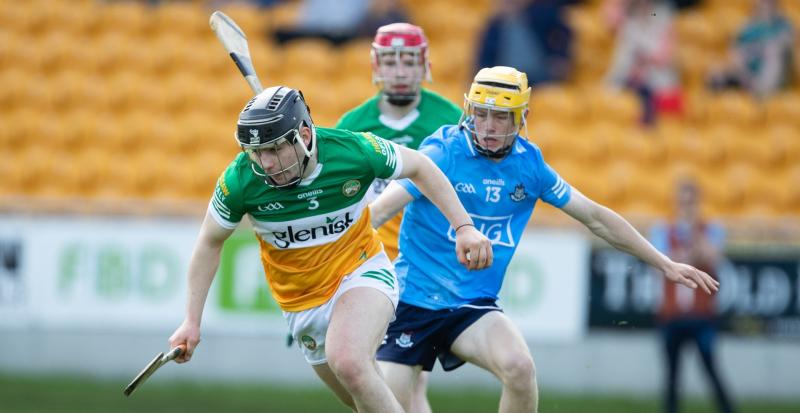 The super James Mahon powers out of defence for Offaly, leaving Conor Newton in his wake.

WITH a display of controlled skilful hurling that excited the senses, whetted the appetite and set the spine tingling with anticipation, Offaly qualified for the Leinster Minor Hurling Championship final with a very impressive win over Dublin in O'Connor Park on Saturday afternoon.

It was the best performance and biggest win by an Offaly underage hurling team in years and with Laois shocking Kilkenny in the other semi-final, they will now have a great chance of winning their first title at this grade since 2000.

The final is fixed for Saturday in Kilkenny but Offaly are playing Kerry in the Joe McDonagh Cup that day and have sought a switch to Sunday. Leinster Council are now seeking Laois' agreement for this and a fixture will be made on Sunday or Monday.

The prospects of this team have been discussed in quiet corners for a couple of years now and they have shown their ability throughout the canmpaign but this took things to a different level. It was their biggest test, facing off against opposition who this team have regularly beaten on their way up but coming from a county that have punched at a higher level for a long time.

Offaly passed their test with flying colours. It was a superly controlled performance by Offaly – they did the simple things so well, they were so disciplined in the way they performed and they had just the right amount of aggression.

They made a slow start and struggled in the first quarter but once they got going, their superiority was profound. They were never quite home and dry and it was only in the last five minutes that they could really relax. Ahead by 2-11 to 1-9 at half time, Offaly kept Dublin at arm's length in the second half – their defence was magnificent and they stopped them getting in for the goal that would have caused real anxiety. The closest Dublin could get was seven points and keeping that gap between them was very important for Offaly.

It completes a quite spectacular week for Offaly minor teams. The footballers destroyed Laois in the quarter-final on Wednesday evening and are now preparing for a semi-final in Dublin this Wednesday. Three of that team, Donal Shirley, Shane Rigney and Niall Furlong were all in action here and it is to their credit that they all played very well with Shirley and Furlong playing the full game while Rigney only went off near the end.

The minor hurlers now find themselves in new territory. They would have been underdogs against Kilkenny but will be favourites against Laois and after this top quality display, there will be a new level of expectation around their prospects. That will put new pressure on them for the final against Laois but they look to have most of the attributes necessary to cope with this.

At the moment, they can reflect in the satisfaction of a really professional, competent display. It was also of a very high quality and it was just heart warming to see an Offaly minor team perform in this manner. It was like a blast from the past for Offaly hurling supporters as the team showed great skill but equally as importantly, tremendous character and work rate.

As a unit, they worked their socks off with the focus on doing the right thing in all phases and at all stages. Not everything worked out, mistakes were made and their wide count – 15 – was way too high, especially as many of those could have been scored. However, they got the vast majority of things right, they took plenty of great scores and after that very uncertain first quarter, they were on top in most positions.

Individually, Offaly had players who stood up all over the field. James Mahon was a tower of strength at full back – his physicality and ball winning meant that the end of the square became a no go zone for Dublin. Niall Furlong excelled in a sweeper type role while Ter Guinan was so tidy on the full back line. Leigh Kavanagh was very good at midfield while his partner Cillian Martin was pivotal – Offaly had more fluent hurlers on the field, but the Tullamore man, a son of 1990s hero, Kevin, inspired with his work rate, getting through the hard yards that is so important for any winning team.

Up front, Dan Ravenhill and Adam Screeney were the main men. Ravenhill was on the verge of having a sensational game but contributed a couple too many to Offaly's wide count – however, on a different day some of those will go over and he looks a real prospect. Adam Screeney was the star of the show. The skill level, the score taking and the audacity of the Kilcormac-Killoughey man was just breathtaking and Dublin never got to terms with him – they had three different men on him and none of them could cope with him. Screeney was carried off in injury time and Offaly will be hoping that his injury is minor. Cathal Robinson also impressed in an Offaly attack where Daniel Hand was missing.

Offaly made a sluggish enough start and it took them a few minutes to settle into the pace of the game. Dublin led by 0-4 to 0-2 after six minutes and a Ruan O'Connor goal after loose marking put them 1-4 to 0-4 ahead after eight minutes.

Offaly settled down after this and it soon became evident that they were a match for Dublin. Ciaran Donovan put Dublin 1-5 to 0-4 ahead and the visitors looked like they could breach the Offaly defence once they powered forward.

Adam Screeney lightened up the first half with some sensational skill and his great individual goal in the 14th minute left a point in it. Dublin recovered to lead by 1-8 to 1-6 after fifteen minutes but Offaly soon got on top in most positions and they turned the tide quite spectacularly.

Dublin didn't score again until the 27th minute and by that strage, Offaly had 2-9 on the board. The second goal cam from an expertly taken Dan Ravenhill penalty in the 23rd minute to give Offaly a 2-7 to 1-8 lead. Conor Brennan ended Dublin's long scoreless spell but Dan Ravenhill got two points, one from play to give Offaly a fully deserved 2-11 to 1-9 half time lead.

Offaly should have been further ahead as Dan Ravenhill, Cathal Robinson and Cillian Martin all missed scoreable chances but a five point lead represented a very good body of work for the first half and left them in a strong position.

They continued to control the game in the second half and a 34th minute goal from Adam Screeney when he tapped home a rebound after his first shot was saved put Offaly 3-13 to 1-11 ahead. It gave Offaly the cushion they needed and left Dublin chasing the game. The visitors did have spells where they got on top and put considerable pressure off but Offaly's defence was heroic and Dublin never got the run of scores they needed.

They did get the gap back to seven, 3-14 to 1-13 after 45 minutes and there were a couple of minutes where a goal might have changed the game. Dublin, however, also had some bad wides and it is perhaps the biggest tribute to Offaly's display to note that they never got two scores in a row in the second half. It is also a measure of Offaly's dominance that Dublin had their five subs used up by the 55th minute and were resorting to hit and hope hurling.

Adam Screeney (Kilcormac-Killoughey): Adam Screeney was magnificent. His forward play was an absolute joy to watch. His stick work, intelligence, imagination, finishing and ability to beat his man was of the highest order. Every good team needs a couple of really outstanding performers and in Screeney and Dan Ravenhill, this Offaly team has this, along with others who are very good hurlers.