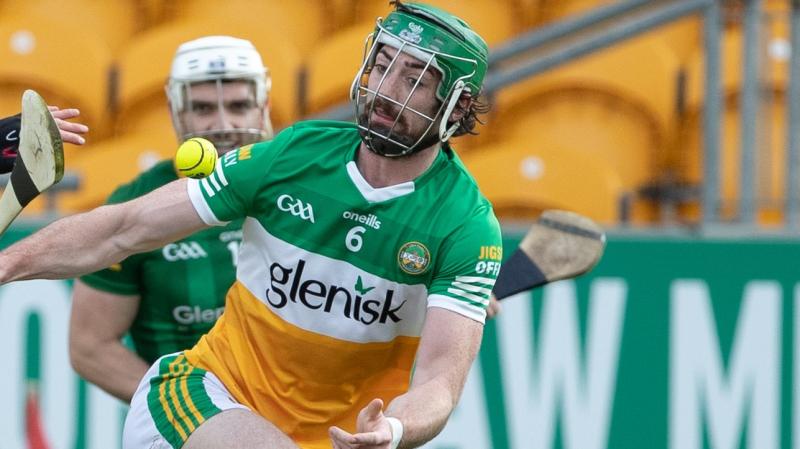 OFFALY produced another mixed performance as they stayed on course for the Joe McDonagh Cup final with a hard earned but deserved win over Down in Ballycran on Sunday afternoon.

The final score of 1-26 to 2-18 summed up perfectly the way this game went. Offaly were never truly comfortable and could possibly have been caught but they never really looked like losing.

They weren't at their very best and it was quite disjointed at times but it wasn't a very bad display either. It was a middle of the road performance by Offaly, just enough to get the win and while they will have to play much better to win the Joe McDonagh Cup, the results are all that matter at this stage.

With one defeat and two wins out of their three games to date, Offaly still have their fate in their own hand. That is all they want at this stage and this win will bring them on a bit more. They are in a hectic schedule of games at the moment with aching bodies and miminal recovery time and a long trip to the Ard Peninsula represented a banana skin for them.

They slid on it a bit but ultimate held their feet to get the win. It should have been easier and Offaly made life difficult for themselces with the careless concession of a goal and a point in first half injury time.

Down gave them plenty of it early on but Offaly were 0-6 to 0-3 ahead after twelve minutes and doing okay. They were 0-10 to 0-5 ahead, 0-13 to 0-7 and then 0-17 to 0-8 ahead at different stages in the first half. It looked like being a very routine afternoon for Offaly at this stage but they took their eye completely off the ball in injury time.

The concession of a goal in the 37th minute was a disaster for them. Jack Screeney, who had settled down to play very well after a slow start, had carried the ball out over the sideline and when Conor Woods floated the ball in, it broke for Daithi Sands to flick to the net. Conor Woods added a point and what should have been a comfortable half time lead was a much tighter 0-17 to 1-9.

Offaly were against the wind in the second half and it meant that a large body of work remained to be done. They got three of the first four points to lead by 0-20 to 1-11 after 41 minutes but again, they made life very hard for themselves by conceding a soft goal – it was obvious that Down were going for the goal once they brought Conor Woods up the field for a 25 metre free and his strike found the net via a couple of deflections.

It left Down trailing by 0-20 to 2-10 and still alive and kicking. Offaly knuckled down to the task at hand and crucially, they never let Down get within a score of them They were able to preserve a four point gap and a 50th minute goal from the superb Killian Sampson gave them a 1-22 to 2-12 lead and some breathing space. They didn't kill off the game fully from here and that is a black mark against them.

Liam Langton came off the bench, clearly eager to impress and working hard after falling out of favour this season but he hit three wides, including two poor ones just after coming on. It left the door open for Down and it left Offaly on tender hooks for the closing quarter. Again the closest Down could get was four points. They got there in injury time and almost got in for a goal that could have saved them. Fortunately for Offaly Eoghan Sands flick went inches wide four minutes into injury time and a late David Nally free gave Offaly a five point lead at the end.

It wasn't Offaly's best display but it wasn't their worse either. They had just enough players standing up to be counted at both ends of the field to get the job done. In the defence, David King and Ben Conneely showed the leadership and excellence you would expect from those two. They were so solid and efficient in what they did.

Killian Sampson (Offaly): This was Killian Sampson's best game in an Offaly jersey. There has been a debate about whether he should be wing back or wing forward. He has done well at wing back in other games but was wing forward here and he was superb with 1-5. His goal had a tinge of good fortune as the Down goalkeeper will have been disappointed not to make the save but his point taking was excellent and he brought one other huge attribute to the table – a great work ethic as he tackled very efficiently off the ball and turned over Down on a handful of occasions.