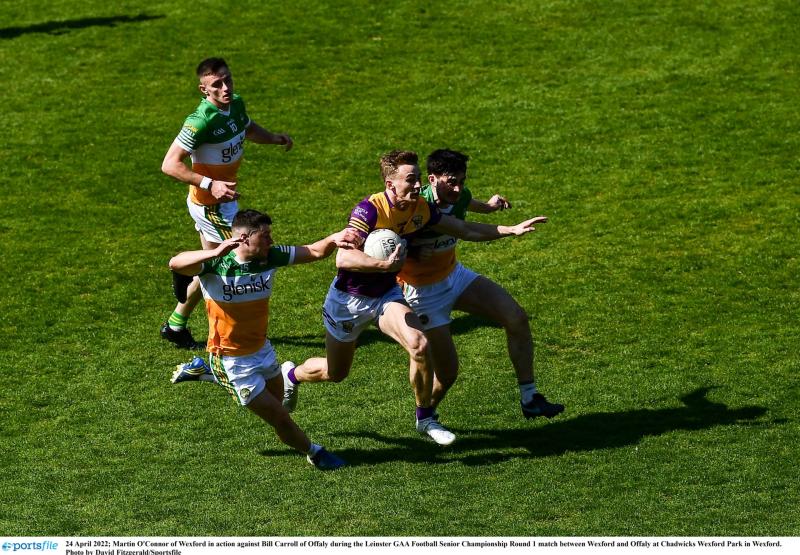 THE impression that an injury stricken Offaly were sitting ducks, there to be taken out of it, proved to be very well founded as a highly motivated Wexford sent them into the Tealteann Cup with a bitterly disappointing defeat in the Leinster Senior Football Championship at Wexford Park on Sunday afternoon.

The alarm bells had rang loud and clear for Offaly when the team was officially announced on Friday morning and it became clear that two of their marquee forwards, first cousins Niall and Ruari McNamee would not feature.

It meant that Offaly took to the field without most of the best forwards in the county. Cian Farrell was a long term absentee as he recovers from a cruciate injury, Peter Cunningham was not on the panel this year as he was on army duty in Syria while one of the most promising up and coming attackers in the county, Jack Bryant was out with a hamstring injury.

It left Offaly with a very depleted lineup and they suffered a further blow before the game as U-20 flier Keith O'Neill could not play. O'Neill had been named on the panel along with fellow U-20 players Lee Pearson and John Furlong on Thursday and became available after Offaly's defeat by Kildare that evening – O'Neill had suffered a leg injury near the end of the Kildare game and he would have been a big help if fit while Tullamore speed merchant Cormac Egan is getting an operation on his injured hamstring..

Another of last year's All-Ireland U-20 players, Cathal Donoghue was also out injured – full back Eoin Rigney was another cruciate victim while Eoin Carroll had taken a year out to travel Australia. It was a savage list of absentees and it left Offaly very vulnerable. Those are the extenuating circumstances and need to be presented to place this defeat and performance in its proper perspective.

That, however, is as far as the extenuating circumstances go. Even with those absentees, there had been hopes that Offaly might be able to edge out a win – after all, they had competed in Division 2 this year while Wexford didn't make much headway in Division 4.

On the day, however, it all unravelled badly for Offaly. A 0-6 to 0-5 half time lead after playing with a strong wind was nowhere near enough but they did improve early in the second half. A Lee Pearson goal put them 1-7 to 0-6 ahead in the 39th minute but by the time they got their next score in the 60th minute, Wexford had 1-13 on the board and the exit signs were looming large in front of Offaly.

They rallied briefly to get the gap back to two but then Wexford got the next two to shut the door on the visitors and end their ambitions of a home tussle with Dublin.

It was a disspiriting afternoon for Offaly, whose flashes of good, fast football were too infrequent. They tried hard but their football and efforts at breaking down Wexford were just not good enough. They had absolutely no complaints at the result and Wexford fully deserved the win.

There has been rumours of discontent among some Offaly players in the camp floating around for some time now in hushed circles. Whether this is the case or not is immaterial in many ways now and there will always be some unhappy players in the high intensity of an inter-county panel - the Tealteann Cup will tell more and it will be interesting to see if more players opt out for travel or other reasons. Either way the changing of the guard in Offaly football will gather pace in the next two seasons as last year's U-20s develop and are given their head.

There will now be speculation that this is John Maughan's last year in charge but they will try and give the second tier competition a good go. Maughan has been a good steady influence in Offaly, raising the bar for players and if this is his last Leinster championship game in charge, it was a sad way for it to end.

However, it was always going to be a tough challenge for them and the Offaly team that started and finished here was always going to find it difficult to survive. The starting forwards found it hard to make headway against a dogged Wexford defence but Offaly were very limited in their options. A couple of players finished the game when they would have been replaced or were taken off later than might have happened with stronger options on the line. Instead Offaly ended up bringing in mainly defenders for their attackers with Carl Stewart, Joseph O'Connor, Cian Donoghue and Conor McNamee all replacing forwards.

It simply couldn't be done and Offaly's defeat was not a surprise. As Wexford got into a winning position, Offaly hadn't the options to turn the tide. On the day, their better players were in defence where Declan Hogan was outstanding, Lee Pearson did very well when introduced and David Dempsey held the centre well: 1-15 was still a big score to concede. Jordan Hayes carried the ball well at midfield at times while Bill Carroll produced some good play, getting two points. Up front, Offaly were struggling almost the whole way – Johnny Moloney, pushed into a forward role because of their attacking scarcity, and Anton Sullivan tried to rally the forces without much real success.

Offaly found themselves on very tricky ground at half time when they led by 0-6 to 0-5, having played with a stiff wind.

It looked like a 3-4 point wind but at the same time, no one was writing Offaly's obituary at this stage. They had moved well at times, without attacking with real menacing intent or pace and they allowed Wexford to hold onto the ball a bit at times.

It was a tight, nervy championship battle and Wexford settled quicker, leading twice in the opening four minutes. Then Offaly began to find a bit of momentum and three on the trot from Colm Doyle, Mark Abbott and a Johnny Moloney free had them 0-4 to 0-2 ahead after 13 minutes.

They didn't build on this, hitting four poor wides in a few minutes while a great block from Declan Hogan prevented a Mark Rossiter goal.

Offaly led by 0-5 to 0-3 after twenty minutes and almost got in for a goal when Dylan Hyland won an Anton Sullivan break and had sight of goal from five metres. His shot was saved and the rebound from Mark Abbott went wide, via a deflection. Wexford were on level terms after 32 minutes and a well worked Bill Carroll point gave Offaly a half time lead that was at least something with the wind.

Offaly began to do things a bit quicker from the restart and it yielded immediate dividends. While Wexford had equalised with a Kevin O'Grady free, Offaly quickly strick for 1-1. The free came from a Paddy Dunican free and the goal was well finished by Lee Pearson in the 39th minute after Johnny Moloney did well – Pearson had followed Kevin O'Grady upfield as Wexford began to pull players back: O'Grady had picked up a yellow card moments earlier on his own 14 metre line.

Offaly then went back into their shell and were turned over a couple of times as Wexford got back into it. Indiscipline and fouling also crept into Offaly's game as Wexford got four without reply to level it up by the 47th minute 0-10 to 1-7.

Another turnover, this time with Niall Darby losing the ball, resulted in Ben Brosnan firing Wexford ahead in the 50th minute and within a couple of minutes Offaly were staring a devastating defeat in the face. A Brosnan free extended Wexford's lead and he then fired home a great 53rd minute goal after the Offaly defence was opened up to give them a 1-12 to 1-7 lead after 53 minutes.

Paidi Hughes made it 1-13 to 1-7 but Offaly fought with everything they had. They emptied the tank and got back into it with points from Dylan Hyland, Paddy Dunican and Niall Darby frees and a Bill Carroll point to make it a two point game with four minutes left -a super Carl Stewart turnover had stopped Wexford from breaking through for goal in the middle of this.

Unfortunately for Offaly, they ran out of steam after this. Goalkeeper Darragh Brooks got a huge free for Wexford and sub Tom Byrne put them a safe four ahead in injury time. Offaly were a beaten docket and a Joseph O'Connor point in injury time over time didn't make one bit of difference - Kevin O'Grady got second off for a second yellow card in the 74th minute.

Ben Brosnan showed his vast experience with a very composed attacking display for Wexford. He got 1-8 with 1-4 from play and was a threat every time the ball went near him.