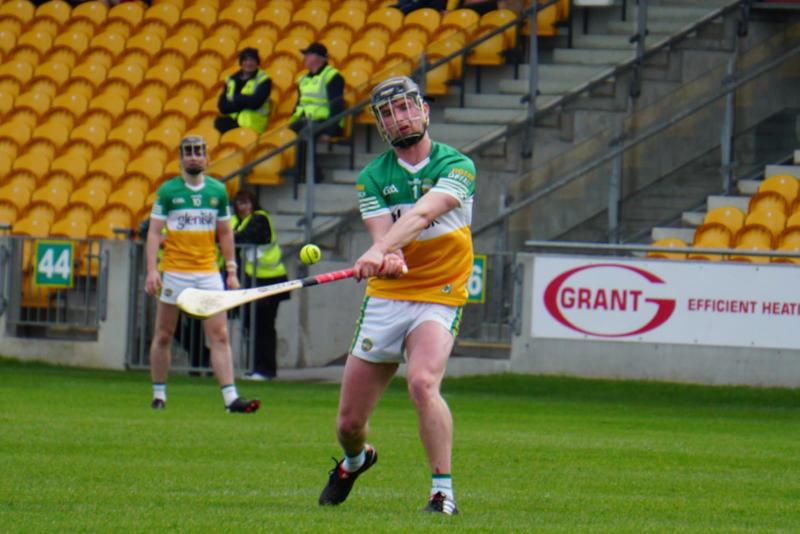 THE result was all that mattered for Offaly as they got their Joe McDonagh Cup campaign up and running with an easy win over a very mediocre Meath team in O'Connor Park on Saturday afternoon.

Having lost to Antrim in their first game, Offaly' margin for error is almost nil as they bid to reach the final and this win was every bit as comfortable as the final scoreline suggests.

It was, however, an unconvincing win, a somewhat unsatisfying display by Offaly. The win was the bottom line and the performance shouldn't be damaging to Offaly, though they didn't take the gilt edged opportunity to enhance their scoring difference. It was, however, a disjointed, stuttering display by Offaly, one that raises as many questions as answers about their title prospects.

This type of performance certainly won't win the Joe McDonagh Cup and the second half was particularly frustrating for the home side. Offaly led by 2-14 to 0-10 at half time after playing with a strong wind but they never clicked into top gear in the second half.

They could only add a further seven points as Meath managed nine and something was off with the way Offaly played in the second half. It wasn't all their fault as Meath introduced a completely unnecessary needle into the game early in the second half, institigating a couple of fairly harmless melees. They paid a dear price for this as full back Shane Brennan was red carded for his role in the first one just a few seconds after the restart.

That ended Meath's chances of a shock win and the game became increasingly scrappy and messy as it wore on. It was very stop-start and the referee Michael Kennedy contributed to this. In particular, the Tipp man blew a huge amount of frees for illegal hand passes. Meath suffered more but Offaly were also pulled up a lot and it helped remove any fluency from the game. An exact count of the frees blown for hand passes wasn't kept but it was somewhere between 15 and 20 – a lot of them were right but some of them certainly looked harsh and while illegal passing should be removed from the game, if this volume were punished in a big top tier game, there would be uproar. And there is always likely to be dodgy hand passes there where the intensity levels are much higher and time at a premium.

Despite that and even taking the wind into account, seven points in the second half was a miserable return. It was nowhere near good enough and Offaly were guilty of some very poor shooting. Offaly hit seventeen wides and many of these were very scoreable. It was that type of game. The normally deadly accurate Eoghan Cahill was as guilty as anyone. The Birr marksman has a couple of wides in every game but his conversion rate was lower than usual – he did top score for Offaly with nine points, four from play but missed chances from both play and placed balls.

There was plenty of others in it and Offaly have a lot of work to do before they make the long trip to Ballycran in Down next Sunday for their third game.

Offaly made a sluggish start here as they found it hard to settle into the pace of the game. They had a strong wind on their back and it took a few minutes for them to get their intensity levels right.

Meath asked some early questions and led twice in the opening five minutes before Jason Samspon levelled it up. Offaly took the lead for the first time in the 10th minute with an Adrian Cleary point – Cleary had a fine first half as he hit three points – and extended it with an excellent Leon Fox score.

Jack Regan cut it to the minimum with a free but by the time, he got their next score, Offaly had opened up daylight. David Nally did well to tap home a 16th minute goal after a Jason Sampson pass as Offaly went 1-8 to 0-3 ahead.

Their second goal arrived in the 23rd minute when Leon Fox squeezed the ball in under the body of Charlie Ennis, who could have done better. That put Offaly 2-9 to 0-4 ahead and they were 2-11 to 0-5 clear by the 26th minute.

With the wind on their back, Offaly really should have pulled out of sight from here but instead they became a bit complacent and took their foot off the pedal. They conceded some careless frees and Regan punished them as Meath outscored Offaly by five points to three to trail by 2-14 to 0-10 at half time.

It meant that Offaly still had a bit of work to do in the second half, though it was impossible to envisage them losing the game. The dismissal of Shane Brennan ended any slim chance that Meath had and the game dwindled out very harmlessly. Without doing anything spectacular, Offaly kept the score board ticking over for a while and were 2-19 to 0-12 ahead with twenty minutes left.

They should have went for the jugular and improved their scoring difference in case this comes into play but instead, they lost their way. They did have a couple of goal chances – hard working sub Brian Duignan drew a good save from Charlie Ennis while he also blasted over the bar with Offaly's final point in injury time. John Murphy had pointed the rebound from his first one to make it 2-20 to 0-13 and Duignan added a score to make it 2-21 to 0-14 but Offaly then went to sleep, allowing Meath to score five on the trot before that late Duignan point.

It wasn't a good display by Offaly and their better players on the day included David King, Ben Conneely, Jack Screeney, Leon Fox, Eoghan Cahill, David Nally and Adrian Cleary, in the first half.

David King (Offaly): On a day where good hurling was only produced fleetingly, it was solid, workmanlike performances that caught the eye. David King had a very steady game in the Offaly defence, defending well, doing the simple thing efficiently and using the ball intelligently.