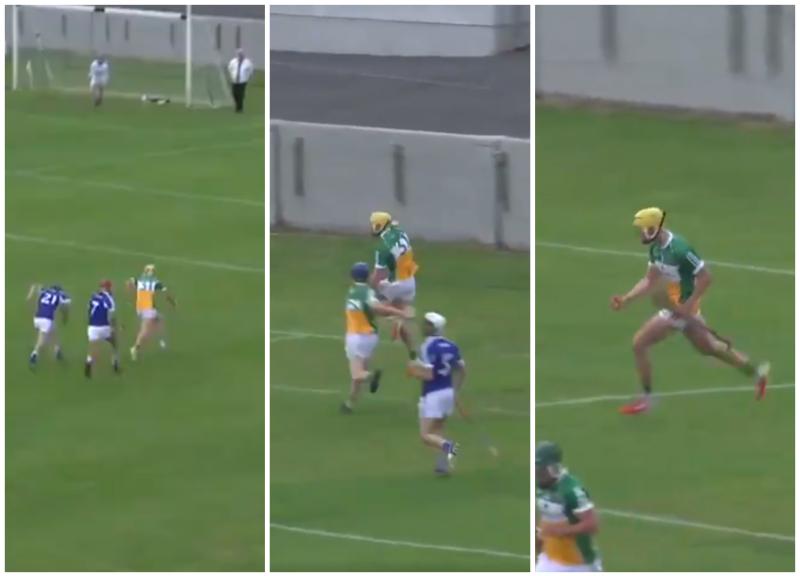 Offaly secured a place in the quarter finals of the Leinster Minor Hurling Championship when they defeated Laois by a three point margin in an entertaining game at O'Connor Park, Tullamore on Saturday.

Victory secured top spot in the group for Offaly and a direct route to the quarter finals on April 30, while Laois finish runners up in the group and face an away preliminary quarter final against Westmeath next Saturday.

The outcome of this game was in doubt until the final whistle but Offaly should have secured the victory earlier as they got on top in the second half but a string of bad wides meant they never pulled away from their opponents.

It was a lively open game with both sides showing good attacking intent. The exchange of scores was swift in the first half with the lead changing hands on a number of occasions and the sides level eight times in that half alone and nine times in all over the hour.

The opening half was fast and furious with both sides showing their capabilities to pick off scores and after a lively 30 minutes of hurling Offaly held a slight edge, 0-13 to 0-11.

They maintained their advantage early in the second half but were then struck by a Laois goal which put the O'Moore men back in front. Offaly responded well and Niall Furlong's 40th minute goal put Offaly back in front and they opened a four point gap with 13 minutes left. Offaly then missed chances to push on and Laois kept picking off points to keep in touch and also saw one effort come off the woodwork in the closing 10 minutes but Offaly did enough to hold on for a deserved win and they will look forward now with optimism to their quarter final tie on Saturday April 30th.

Offaly began brightly with two points inside the first three minutes from a Dan Ravenhill free and a good score from Shane Rigney. Laois hit back and points from Jer Quinlan and frees from Eoghan Cuddy and Ben Deegan had them ahead for the first time after eight minutes. A great point from the right sideline by Conor Doyle and an Adam Screeney free restored Offaly's lead but once again Laois replied with three in a row from Jack Breen and two from Jer Quinlan to lead by two after 13 minutes.

Cillian Martin and Adam Screeney quickly got Offaly back on level terms but Ben Deegan's free edged Laois in front again. Dan Ravenhill levelled with a great point from inside his own 65m line and a brace of frees each from Ben Deegan and Adam Screeney had the sides level again after 24 minutes. Dan Ravenhill and Thomas Brennan had the sides level for the eighth time before Adam Screeney hit three in succession (one free) to push Offaly three in front. Jer Quinlan's late point then reduced the half time deficit to two points, 0-13 to 0-11.

Ben Deegan cut the gap back to the minimum from a free early in the second half but Adam Screeney (free) and Leigh Kavanagh extended the lead to three again. Then Laois struck back and after Ben Deegan pointed another free, Offaly lost the ball in defence, Jer Quinlan drove forward and when the ball broke loose, Cormac Byrne finished it to the net and Laois were a point up again.

Adam Screeney levelled matters for the last time with a lovely point but Jack Breen put Laois back in front before Offaly got their goal. Adam Screeney's cross from the right wasn't dealt with by the defence and Niall Furlong finished the ball to the net, picking up an injury along the way which saw him being substituted a few minutes later.

Points from Dan Ravenhill and Shane Rigney pushed Offaly four clear but Laois wouldn't go away and Thomas Brennan and Ben Deegan (free) kept the game in the melting pot. Dan Ravenhill pointed a long range free but Jack Breen replied for Laois. Sub Ruairi Kelly burst forward to fire over a long range point for Offaly and Laois did have one last drive for an equaliser but Caelum O'Brien's low shot was well saved by Liam Hoare.

Offaly held on for victory and can now plan ahead for a Leinster quarter final.

There were a number of strong contenders with James Mahon, Dan Ravenhill and Adam Screeney having strong claims but Brecon Kavanagh gets the vote for an assured performance at centre half back. He read the game well and delivered good ball into the forward line.

Offaly's goal 10 minutes into the second half was the crucial score. They had led at half time but Laois hit the front again with a goal five minutes after the break. Niall Furlong's goal put Offaly back in front and they were never headed again. They could never quite shake off their opponents but they just had enough in tank to get them over the line successfully.

Matthew Redmond handled the game well and wasn't really a factor in the outcome. He let the game run and called the game back and issued cards when necessary, all of which were justified.

Both sides showed good potential and are capable of troubling sides in the latter stages of the provincial championship. Offaly will be concerned by the number of wides they hit, 15 in all – 10 of them in the second half. Five of those wides also came from placed balls and that is an issue that will have to be addressed. In a tight game they had the opportunities to kill off their opponents but those misses left Laois in the game until the final whistle.

O'Connor Park looked in splendid condition for this game on a fine Spring day. After all the dry weather the pitch was firm and the bounce of the ball caught players out on occasion.