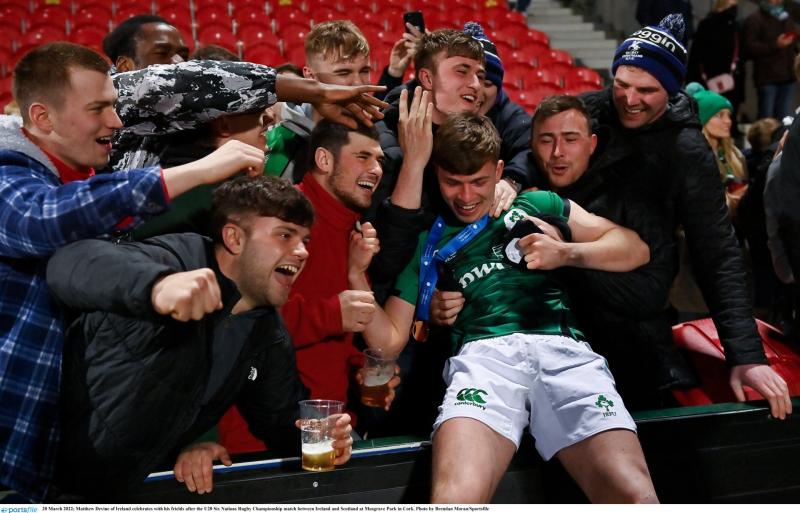 THE son of a former Offaly footballer has played a starring role for the all conquering Irish U-20 rugby side who won a historic Grand Slam last weekend.

Matthew Devine had a great campaign for a fantastic Irish side, who completed the Grand Slam with a run away 59-5 win over Scotland in Cork on Sunday evening.

He is a son of a former Offaly footballer, Shannonbridge man, Mick Devine. Matthew Devine scored an excellent try early in the second half, chasing his own kick forward to touch down as Ireland sauntered to the easiest of wins. He had a great tournament and it was his fourth try of the campaign.

Now 20 years of age, Devine plays at half back and has featured on Irish underage squads on his path up. He has grown up in Ballinasloe and began his rugby with the local club there while he also played with Garbally College, winning a Connacht Schools Senior Cup with them. He now plays with Galway Corinthians and will have a great chance of making the grade at professional level.

Offaly people retain fond memories of Mick Devine. He was a tenacious, solid and very capable football defender for the county, and would have played more only for his rugby commitments – he was a flying winger with both Connacht and Buccaneers in the 1990s.

Sporting quality is very much part of the family DNA. A first cousin of Matthew Devine, Cormac Egan was a brilliant forward on the Offaly side that won the All-Ireland U-20 Football Championship last year while another first cousin, Diarmuid Egan had an excellent year as Tullamore won the Senior Football Championship in 2021 – their mother Michelle is a sister of Mick Devine.

Mick Devine also has an All-Ireland U-21 Football Championship medal as he was on the panel that won a famous title in 1988, beating Cavan in the final at a thronged Longford. He won a Leinster U-21 football medal with Offaly in 1986. He played 24 league and championship games for Offaly, mainly at centre and full back, from 1990 to 1994, when rugby began to take over. He was a key part of the Shannonbridge side that won a historic Senior Football Championship title in 1996, coming on as an early sub in their final win over Tullamore – he would have been on the team but had missed the semi-final after getting injured playing rugby.

Sport also oozes out of Matthew Devine's maternal family – his mother, Catherine is a sister of a former Galway footballer from the 1980s, Ballinasloe man Barry Brennan.