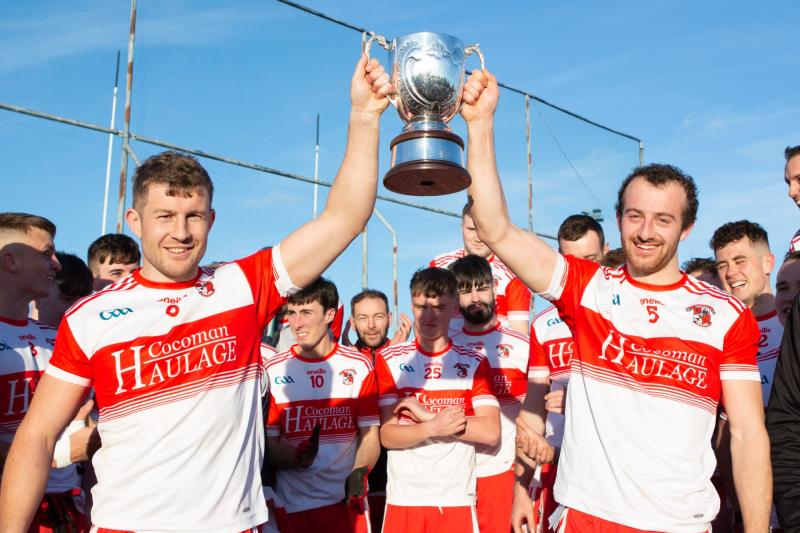 IT has been a sensational year for Clonbullogue and as they now set their sights on glory in the All-Ireland Junior Football Championship, it seems strange to note that it got off to a nightmare start with a surprise defeat by Daingean in the first round of the Offaly Intermediate Football Championship.

There is, however, a silver lining in every cloud and as joint captain Eddie Bennett remarked after Saturday's fantastic win over Kildare's Kilcullen in the Leinster club junior football final, that defeat served as a big wakeup call for them.

They went on to easily beat Daingean in the Offaly semi-final, they produced one of the performances of the club football year when beating Raheen in the final and have now gone onto capture provincial honours.

Saturday's 5-3 to 1-10 win over Kilcullen was heart in you're mouth stuff as Clonbullogue scored more goals than points to come through a hugely entertaining shootout in Newbridge.

“It was a long year for us. We knew with the talent we had coming up at underage level it was bound to come at some stage. We were just keeping it going, trying to get the team right, trying to get everything going so that we could keep on progressing and that is what we did. We lost against Daingean in the championship this year and I think that loss brought us on a lot. When we were playing a semi-final against them and then a final, we settled ourselves and we knew the team we wanted to play. We knew how we wanted to play football.

“It is local rivalry and in fairness to Daingean, they were set up brilliantly this year as well. Even in the semi-final, we found it tough at times to break them down. It is just the intermediate championship, it is always going to be a dogfight.”

He revealed that they decided they won give the Leinster campaign ago after beating Raheen in the “We kind of did say we would give it a go. After the Raheen game, we were upbeat and ready to play football. We are all young lads on this team. The average age is about 22. I am only 22 and am classified as an old boy on this team. With the talent that we have and the legs we have, we just wanted to keep going and play football.”

Bennett was asked about what has changed for Clonbullogue this year?

He talked about the influence of county U-20 star Keith O'Neill and other young players.

“Unbelievable. It is a huge pick up to get lads of talent. Even Jamie Guing played in the Leinster minor football final and my brother (Peter) was on the Offaly U-20 panel that won the All-Ireland. We had plenty of lads who played underage with Offaly and we just wanted to ground the team and then get out and play football.”

“That is winter football, though the ground here wasn't too bad. We have played in Gracefield for the guts of our Leinster championship and it was very heavy ground. We came here today and the fact that we got into a county grounds here was a help. We weren't used to that all year. Even though we got to a Division 2 league final and an intermediate, we still didn't get to play in a county grounds. Maybe that kind of got us but when you can win on tough days like today, that is what makes a team really.”

Bennett was wing back in an excellent defence and when it was suggested that they earned the plaudits in the final rather than the attack, he grinned:

“Throughout the year our forwards would have been putting up good scores. A forward always looks great but the defence is always there to try and help them out. We always try to settle ourselves to be a team. We don't want to be individuals going up the field and whoever gets this many points, they are the great lads. It is all about playing as a team, that is what we wanted.”

Clobullogue will quickly get back to business ahead of the All-Ireland semi-final against Mayo's Kilmeena on January 29-30.

“We will get back to basics very quickly. The last day, we had a bit of Covid spike after celebrations and we are not going to have any of that this time. We are going to enjoy it tonight and after that, we will be training on Monday evening.”

Manager Joe Kilmurray knew they had come through a tough, classic battle but the enjoyment factor was limited for people on the sideline while it was going on.

“It was extraordinary. Even the first half, we kicked eight wides. It is not like the lads inside but they worked really hard. Our backs were brilliant. Look, Kilcullen are a good team, they came at us from every angle. It was good to watch for a neutral but not for a Clonbullogue person. It was tough but we are delighted. It is brilliant. People dream about this. They deserve it, they really do.”

The Rhode man said he wasn't concerned when Clonbullogue didn't kick a single point in the first half.

“I was never concerned because the lads know themselves. They just needed to calm down. We got them in for the water break and they improved a small bit. Kilcullen kept ticking along too but we never panicked. We knew we were three, four, five points better to be honest with you but realistically we should have had the game over at half time. We are just delighted, it was a brilliant finish. Great excitement here, it is great for Offaly when a club team gets over.”

Kilmurray is looking forward to the All-Ireland semi-final.

“We don't mind who we play, we are in it now and it is brilliant. We will let them enjoy it and get back then.”

During the second half, an clearly annoyed Kilmurray complained to a linesman about decisions that were going against them and he explained that he felt Clonbullogue were being illegally stopped as they tried to move the ball out of defence.

“We were coming out of the back line and the ball was being stopped. There were a few things that he was constantly doing, it was emotions.”