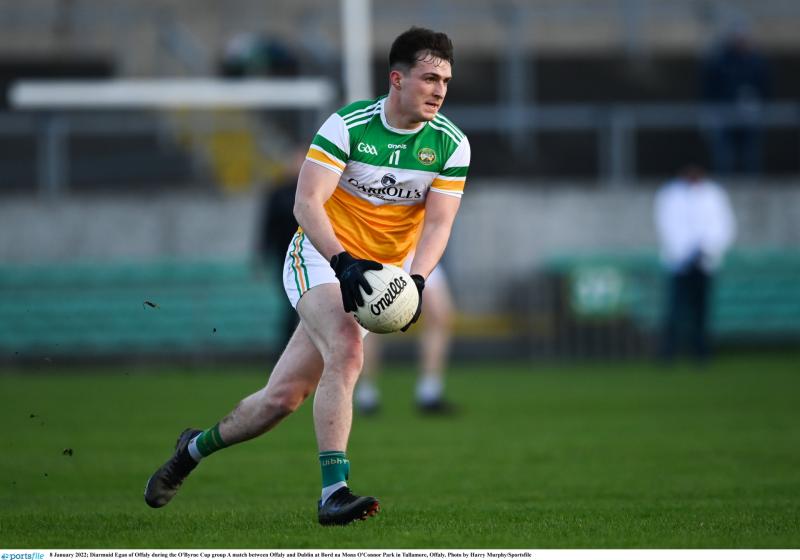 Diarmuid Egan, a second half sub for Offaly.

A SENSATIONAL late late show from Niall McNamee saw Offaly snatch victory from the jaws of defeat when they pipped Longford in a dramatic O'Byrne Cup tie in Kilcormac's Faithful Fields on Wednesday evening.

Offaly were on the verge of a bitterly disappointing defeat when the veteran McNamee rode to the rescue with a magnificently well taken goal and a point deep into injury time.

It was a sensational end to a lively, very keenly contested and entertaining game. Offaly were in quiet control when they led by 0-15 to 1-9 with the game ticking towards the last five minutes. Almost in the blink of an eye, they found themselves trailing by three as Longford super sub Padraig Joyce turned the game on its head.

Even though the lead was only three points, Offaly had been clearly the better side in the second half and were full value for that three point lead. A Jayson Matthews free cut the deficit and then Joyce got in for a goal. He followed up with two points to leave a shell shocked Offaly side trailing by 2-12 to 0-15 in injury time and they seemed to be beaten.

It was some turnaround but the drama was not over yet. Longford were braying for full time and some Offaly supporters had headed for the exit when Niall McNamee finished excellently to the net after getting the ball in the danger zone with three minutes of injury time gone. Still the play went on and four minutes had elapsed when McNamee got possession again, this time about thirty five metres from goal. The Rhode scoring machine showed his vast experience, resisting the temptation to shoot off his left, turning inside his marker and arrowing a super kick over with his right.

Longford had no time to respond and a delighted Offaly knew they had got out of jail as they kept their O'Byrne Cup hopes alive with a game to come against Louth in Ardee on Saturday – they will need Longford to beat the Dubs and them to beat Louth to get through, and scoring difference could come into it.

Offaly had mixed the good and the bad in the first half and trailed by 1-7 to 0-8 at half time. They played well for a lot of the second half, taking back the initiative with four points without reply to lead by 0-12 to 1-7 after seven minutes of the second half. As both sides emptied their bench, Offaly looked like they had the measure of their opponents until Longford staged their late salvage act.

It was a great finish to a very competitive game that produced plenty of decent football. It was a testing fixture for Offaly who have had a lot of players involved in Sigerson Cup action this week but they still got a reasonably strong team out on to the field.

They won't be shouting from any roof tops about their current form but they will be pleased with the application and spirit showed here while they moved the ball very well at times. Offaly looked fit and hungry and there were some fine individual performances.

The Longford attack opened up their defence for a while in the first half and late on but apart from that Offaly defended well. Jayson Matthews caused them a lot of problems in the first half but they couldn't get him on the ball in the second half – as a unit the Offaly defence tightened up in the second half with Joseph O'Connor improving while Mark Abbott and Johnny Moloney impressed before going off with second half knocks.

Longford midfielder Darren Gallagher was the standout figure at midfield with the Tullamore based garda showing his class but Offaly worked hard here and Aaron Leavy put in a decent shift. Up front, Bernard Allen caused Longford loads of problems every time he got the ball, roasting his immediate opponent and firing over four points, three from play. Dylan Hyland made a very useful debut – the Raheen man was a talented underage footballer but went to Australia for a few years. He looked comfortable at this level, getting five points, two from play - he has the scope to get involved more in general play and he will improve.

Niall McNamee had been fairly quiet before his late tour-de-force. He had got on ball but was tightly marshalled and didn't have many scoring opportunities. However, Offaly were right to keep him on the field and he showed his value to this team, despite being in the veteran stages of his excellent career. His late goal gave Rhode a draw in the senior football final against Tullamore last year and once again he showed his class here, producing the goods when needed on a day when he everything didn't go his way.

Offaly had played very well in the first quarter and were clearly the better team up to the first half water break. They moved the ball well with plenty of off the ball running and Longford struggled to live with them.

Bernard Allen (mark), Jordan Hayes and Dylan Hyland fired over quick points in a blistering Offaly start. They were rocked in the seventh minute with a goal against the run of play – Dessie Reynolds blasted a great shot to the roof of the net from ten metres after Josephn O'Connor just failed to cut out a through ball.

Offaly recovered well from that, continuing to take the game to Longford. They got three of the next four points to lead by 0-6 to 1-1. Offaly lost their way quite badly after that as Longford got on top and began to open them up.

The visitors got five points without reply to take a 1-6 to 0-6 lead by the 29th minute. Dylan Hyland and the brilliant Jayson Matthews swopped frees before Offaly missed a great goal chance in the 34th minute – Aaron Leavy rattled the crossbar, forcing the net to bounce, after Niall McNamee sent him in. Bernard Allen's quality point left Offaly trailing by 1-7 to 0-8 at the break.

Jordan Hayes (Offaly): A choice between Jordan Hayes and Longford's Darren Gallagher. Hayes had a quality display for Offaly, though his influence did dwindle a bit late on. He got on a lot of ball, was very athletic and strong on it and his distribution was very good.