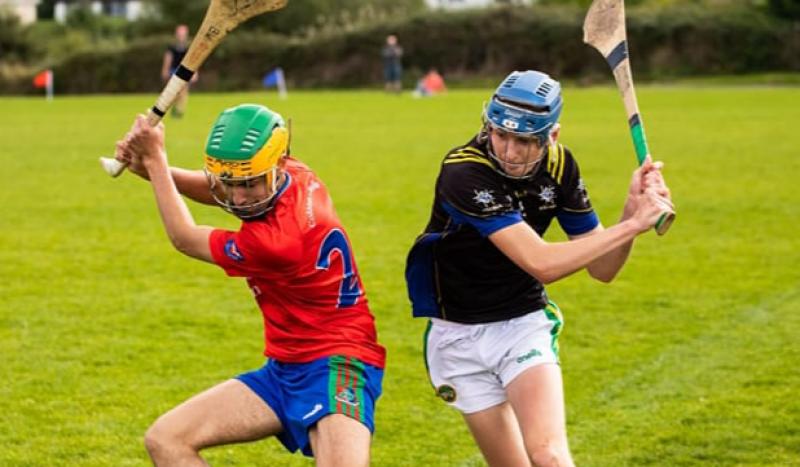 Colaiste Choilm and Mountrath Community School are both through to the knockout stages of the Leinster Colleges senior 'B' hurling championship after an enthralling game at Faithful Fields on Monday evening.

The Offaly school defeated their Laois opponents by a single point and qualified in second place in the group. They will now play Johnstown in the knockout phase while Mountrath will pit their wits against Borris VS.

The double qualification of these teams was somewhat overshadowed by a serious injury to Mountrath forward Ciaran McKelvey right on the stroke of full time as he picked up a heavy knock to the head and needed medical assistance for a long period after the game was over. It was literally the last puck of the game when he picked up the injury and hopefully the young wing forward is on the mend.

The game itself was a close affair with momentum changing throughout the 60 minutes. The Tullamore outfit had looked like they might pull away in the second quarter but a resolute comeback from the Laois school meant they were level in the final stages only for Daniel Bourke to score a late winner for Colaiste Choilm.

The game was dominated by the two freetakers; Ben Deegan led the way for Mountrath while Tullamore centre back Dan Ravenhill gave an exhibition of long-range free-taking for the Offaly side.

Ravenhill opened the scoring early on but Deegan opened his account soon after with his first placed ball of the evening. Colaiste Choilm then began to steal a march with a fortunate goal from Sean Rattigan helping them into a 1-2 TO 0-1 lead after six minutes.

The Mountrath response was impressive with Ben Deegan punishing the Tullamore men's indiscipline with four scores in a row to leave it level after 13 minutes. Mountrath then snuck into the lead when Jer Quinlan got their first score from play to leave the Laois men one point ahead at the water break.

Ciaran McKelvey landed a great score from distance to boost Mountrath but the Tullamore outfit then hit Mountrath for 1-4 in succession to open the game up. Ravenhill and Daniel Bourke with frees while Joel Troy got their second fortunate goal of the evening as Mountrath trailed 2-7 to 0-7 with five minutes left in the half.

Again, they responded well. Jer Quinlan got a much-needed score before a free from Deegan and one from play on the stroke of halftime from Ciaran Culleton narrowed the gap to three at the break - 2-7 to 0-10.

Colaiste Choilm got a rapid start to the second half with three scores on the bounce to restore their six-point lead but Ben Deegan was in great form on the frees and three more from him had it back to a one-score game with 11 minutes to play.

The Offaly school went four ahead through Ter Guinan but four scores in a row, two from Deegan along with points from Conor Doran and Josh O'Brien Holmes left Mountrath level with two minutes to play.

In the end, it took a Daniel Bourke wonder score from the sideline to win it but the one point defeat was enough to hang on top spot in the group and a knockout clash with Borris VS in the new year.